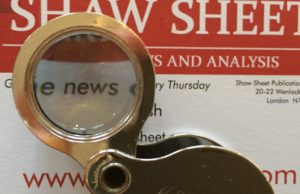 LABOUR ANTISEMITISM: The problems of antisemitism in the Labour party hit a new milestone with a protest by the Jewish Community in Parliament Square.  The trouble is that the left’s traditional support for Palestine has long spilled over into antisemitism so the rise of the left within the party has brought this unpleasant baggage with it.  Not surprisingly, bearing in mind what happened in Germany, the Jewish community is particularly sensitive to racial slurs but there is now too much evidence of a real problem to be disregarded.  Mr Corbyn himself is accused of questioning the removal of a racist mural and of connections with antisemitic groups.  Respected figures including David Miliband and Dame Margaret Hodge have criticised the party and Baroness Chakrabarti is reported to have been on the verge of tears at the suggestion that her enquiry into the issue was a whitewash.  Mr Corbyn clearly needs to come out with a strong statement on this but that may not go down well with his left wing supporters.

REVERSE VENDING: The government is to introduce a reverse vending scheme under which an additional charge is made to the purchasers of products contained in plastic glass and metal single-use containers but with credit given when the containers are put into recycling machine.  Details of the scheme, which will come into effect next year and is expected to cost in the region of £1billion to implement, are still being worked up by DEFRA.  Schemes of this type are already in place in Germany and some Nordic countries.

PREGNANCIES: Pregnancies of women under 18 are at their lowest level since 1969 according to the office of National Statistics.  The total figure for 2016 was 18,076, down from 20,351 the previous year.  The levels are highest in deprived areas.  More than 25% of births were to mothers born outside the UK.  The only age group in which birth rates have increase is the over 40s.

RUBBER DUCK ALERT: Researchers from the Swiss Federal Institute of Aquatic Science and Technology have warned against the dangers of bath toys and particularly rubber ducks.  The interiors of such toys are a breeding ground for microbes and infectious diseases which are often squirted out of the duck and over the child (although probably not in Switzerland).  All toys examined had slimy internal biofilms and 80% carried infectious germs.

FRANCE:  A terrorist killed four people and wounded another fifteen in an attack near Carcassonne.  The dead included a gendarme, Lieutenant-Colonel Arnaud Beltrame, who had volunteered to take the place of one of the terrorist’s hostages.  Father Jean-Baptiste, canon of Lagrasse Abbey, who administered the last rites to the gendarme, quoted the gospels in his statement about M Beltrame’s heroism: “There is no greater love than to lay down one’s life for one’s friends”.  Surely this brings us, in this Easter week, closer to the reality of the Easter story’s tragedy and mysterious triumph?  Whether or not the story of God’s only son sacrificing himself so that mankind can have eternal life is literally true, the lieutenant colonel’s courage and selflessness prove it to be at least metaphorically true.  The gendarme laid down his life so that others may live; the terrorist laid down his life so that others may die.  That’s why Arnaud Beltrame’s society and beliefs will always prevail, and why the terrorist will always fail.

RUSSIA: Elsewhere, the thoughts and prayers of the world also went out to the victims of the fire at the Winter Cherry shopping centre in Kemerovo, Siberia, and to their families and friends.  At least sixty-four people were killed – more than thirty of them were children – by the blaze which swept through the complex’s shops, cinemas, restaurants and play centres.  There are claims that exits had been blocked and fire alarms turned off, and allegations that bribes had been paid to avoid fire safety inspections.

The world also sent a record number of Russian diplomats/spies back to Moscow.  More than twenty countries announced that they will be expelling more than one hundred alleged Russian agents working under diplomatic cover, as a protest against the assassination attempt on Sergei and Yulia Skripal in Salisbury last week.  Many countries have recently seen their security and stability threatened by Russian cyber-attacks and by Russian penetration of social media with fake news and propaganda, and it seems that the blatant and horrific assassination attempt was the last straw.  Even nature made its own symbolic gesture: a huge cloud of dust was swept up from the Sahara and collided with freezing Siberian air to turn the snow covering the Russian ski resort of Sochi an unpleasant yellow-orange, exactly the colour of snow which has been urinated on (not an April fool, or fake news, but true!).

CHINA: North Korean leader Kim Jong-un has travelled to Beijing for a meeting with President Xi, according to rumours which the Chinese authorities are refusing to confirm or deny.  It would be the first time that the two leaders have met, and the first time that Kim Jong-un has left his country since taking power in 2011.  Mr Kim will meet President Moon of South Korea next month; a meeting with US President Trump is being planned; satellite photographs indicate that there has been a dramatic reduction in activity at North Korea’s Punggye-ri underground nuclear blast site this month, according to US experts; 160 pop musicians from the South will give a number of concerts in the North this week.  The meeting in Beijing, if true, can only be another piece of good news from the region, indicating the potential for a more open and less aggressive North Korea, unimaginable four months ago, when its leader refused to meet a Chinese envoy sent to Pyongyang.

SEEING PURPLE:  One of the most unexpected beneficiaries of the internet revolution has been the business of selling homes.  Or at least, beneficial to the new form of minimal intervention, highly disruptive, virtual agency.  Ten years ago selling residential properties was highly personalised; needing lots of premises on the high street with photographs in the window, printed particulars, coffee machines, and friendly agents. But then came internet technology.  Websites are far more sophisticated than any printed particulars, with lots of photographs, videos, plans, school catchment diagrams, and aerial views.  Agents still did the showing and selling, but shop premises seemed increasingly irrelevant.  Then, six years ago, along came Purplebricks.  Purplebricks has no physical premises at all; it employs agents for showing and clinching deals, but charges just a flat rate fee, £849 (£1,199 in London) for on-line advertising.  Its growth has been rapid and controversial – both for breaking the traditional mould, and because it will not release any sales figures (it says four-fifths of listed houses are sold within ten months of first listing; its rivals say more like half).  It is AIM quoted so its financial performance at least can be seen – it has yet to make a profit; turnover last year was £98m.  It can’t be doing that badly though – several rivals have been set up, on both the Purplebricks model and as a blend of the digital and the traditional – such as Rightmove.  But most have not really taken off and Purplebricks seems to power-on regardless of gossip about what its true success rate is.  It has certainly convinced the German media giant Axel Springer who announced this week it had paid £125m for an 11% stake in Purplebricks. That gives the company a market value of £853m – against Countrywide, the largest traditional agency in the UK which is valued at £211m.

SEEING RED:  Axel Springer may be wishing they had seen one piece of news this week before pricing their share purchase in Purplebricks. The RICS, who represent estate agents, released reporting on the housing market, showing that the number of housing sales continues to slow – now for almost a year.  The new build market is holding up – almost certainly driven by the sophisticated financial products and incentives been offered by the large house builders, but the second-hand market continues to decline (though generally, not in prices, except in London where price growth has almost stopped).

Also out were the figures for mortgage approvals.  They show a somewhat glummer picture, with new mortgage approvals down 11% on the comparable figures last year.  That is a bigger drop than was expected and specialists are somewhat baffled by what the reason might be – especially as the first time buyer market is said to be up by nearly a third on last year – though that reflected post Brexit caution among buyers last year, so some bounce was not unexpected.  Those specialists are inclined to blame two things for what is happening in the rest of the market – firstly the market really is hitting a ceiling of affordability, even with some wage growth coming through.  House prices as a percentage of average earnings have never been higher, especially in London, and as lenders stick to traditional formulas for lending – four to five times salary, heavily underlined by the Bank of England’s guidance, that means buyers simply cannot bridge the gap.  The other factor is cost of purchases – stamp duty is a major factor in house moving costs, though not for first timers where most transactions are exempt. Also possibly a factor is concern about levels of interest rates – they may still be low, but the widespread sentiment is that the only way is up.