Uber’s move into bicycle sharing could transform our cities. 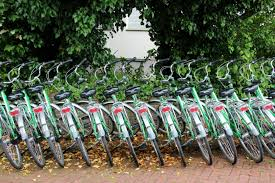 I have been a convert to shared cycle schemes for some time.  The convenience of walking up to a TfL cycle stand, picking up a bike and getting to my next appointment quickly by taking some modest exercise is quite compelling.  It is rare for such a journey to take longer than going by tube, and London traffic is such that I invariably beat buses and taxis.  In addition, I will always save money; given that the cost is £2 per day, regardless of the number of journeys.  This mode of transport has come closer to an obsession after downloading apps for Ofo bikes and Mobikes. For these bikes there are no official stands and picking up a bike left randomly in the street (unlocking with my smartphone) to leave it at my destination is the ultimate in convenience.  It now seems that I will soon have another choice after this week’s purchase of Jump Bikes by Uber. The question is why would Uber want to get involved, and what are the broader implications?

It is worth examining just how big the shared bike market has become in a very short space of time.  In just over two years Ofo and Mobike have developed into significant exporters for China, manufacturing over 19 million bicycles for the streets of London, Paris and over 200 other cities.  Their success is a clear illustration of the potential demand – but just how great is that potential?  Some indication is gleaned from the fact that Meituan-Dianping was recently reported to have paid $3.7bn to buy Mobike.  Uber’s purchase of New York based Jump Bikes cost a much more modest $100mn, but it still points to a big commitment.  It may be that they are just looking to add some diversity to their income stream – always a good idea.  However, it may also be that they have realised that shared bicycles could ultimately make major inroads into Uber’s main taxi business.  If shared bicycles become still more accessible, many will prefer to pay 50p for an Ofo bike trip to £5-10 for an Uber taxi ride.  Even now in London I typically wait 4 minutes for an Uber, yet can usually walk to a TfL bike stand in that time – and will often find an Ofo en route.  That bicycles could be a clear rival to Uber is well illustrated by the average trip on Jump bikes in San Francisco being exactly the same distance as an Uber ride  – 2.6 miles.

Uber and Jump Bikes have made it clear that part of the incentive for the takeover is to be able to develop in the more potentially lucrative European market.  For Uber there is also a compelling reputational argument.  They have had a series of issues with European regulators over their taxi business but may be able to make strong social arguments for a bike service.  The new business has a potential “triple bottom-line” given that it can generate healthy financial returns, with the addition of social and environmental benefits.  It might be hard to argue against this if it involves getting a lot of vehicles off the street, thereby improving air quality and health.  The general economic benefits from the improved productivity of getting people to their destinations more quickly could also be significant.

So what’s not to like about a shift towards bicycles becoming the main mode of transport in cities?  Clearly in London it may be the weather.  There have been frequent times when an outward journey by bike has had to become a return journey by tube due to the rain.  Good weather can be just as discouraging; arriving at work looking like a wet rag after cycling in 30-degree heat is not attractive.  Similarly, while a world without cars may be better, the interim period is still one of having to tackle heavy traffic fraught with danger and fumes.  The other safety issue is that of a lack of helmets.  For the system to work optimally it will require people travelling with a bicycle helmet in the same way that they take an umbrella, it has to be habitual.  There will also be many detractors who are not happy with the negative aesthetics of streets littered with brightly coloured cheap bicycles, and there have been numerous pictures in the press of large Asian “bike graveyards”.

A London without cars may still be a distant prospect.  For the bike sharing movement to develop exponential growth it will require infrastructure and legislation.  Cycling along the embankment, separated from cars and buses, has become a delight, but there are still too few cycle lanes around the city and the road quality is often not conducive to a comfortable, or even safe, ride.  Further major investment in our roads will be needed for more than just the brave and the young to take to their cycles.  From a legislative perspective there will need to be greater enforcement of proper cycling behaviour – reckless cyclists are giving the pursuit a bad name – as well as a legal compulsion to wear a helmet, as in places like Australia.  If we can get all of this right then Uber’s Jump investment may prove to be even savvier than their original business and we could all become like Norman Tebbit’s father who “got on his bike to look for work”.