At the Wimbledon Bookfest.

Sadly the Wimbledon Bookfest is now over for another year so it is too late to tell you to go along and listen to any of this year’s speakers and interviewees.  However, my experience of attending Rachel Cooke’s interview with Yotam Ottolenghi makes me urge you to keep an eye out for the event next year, but also, if you haven’t already, to take some notice of the phenomena that is Ottolenghi.

Yotam Ottolenghi was born and raised in Jerusalem, one of three children born to Michael Ottolenghi , a chemistry professor and his wife Ruth, a high school head.  The culinary influences as he was growing up, as he explained on stage on Sunday afternoon, were threefold; Italian from his father’s family, German from his mother’s side and the Middle Eastern street food so ubiquitous in Jerusalem.  His interviewer, Rachel Cooke, herself clearly a foodie, was also not only an old acquaintance of Yotam’s, but had herself lived in Jerusalem.  Incidentally, she also won the British Press Awards, ‘Interviewer of the Year Award’, back in 2006.  It was easy to see why.  Her friendly, sympathetic (in the French, Spanish, Italian use of the word as ‘understanding’) and enthusiastic questioning of her subject helped bring out the best in a man who is obviously already a charismatic and engaging personality.

The interview, on an extremely soggy Sunday afternoon, fizzled and buzzed with the energy of the two people on stage.  Throughout, a passion and delight in food and the pleasure it could bring – particularly enjoyed in the company of family and friends -was the overriding message of the encounter.  The audience was entranced.  The reason for Mr Ottolenghi’s appearance was, of course, the fact that he has just bought out a new book (and indeed opened a new restaurant, ROVI in Fitzrovia).  For those unfamiliar with the man (and amongst those interested in food there must be very few, as his influence in British cuisine over the last decade has been phenomenal), his name has become synonymous with somewhat exotic ingredients such as sumac, black garlic and pomegranate molasses, an emphasis on vegetables (although he is not himself a vegetarian) and a certain complexity.  He has produced six cook books since 2008 and the latest, SIMPLE, came out the day after his appearance in Wimbledon on Monday 16th October.  Most of his audience of course snapped up signed copies.

The title does not simply (excuse the pun) refer to the ease of the recipes, although it was conceived apparently because of a complaint by his sister, busy with a job and three children, that she ‘did not have the time’ for the recipes in his other books.  However, he firmly refuted the fact that he was attempting in any way to take the place of Nigel Slater (author of such best-selling books as The 30-Minute Cook); a reference which, from the laughter, many of those in the audience clearly appreciated.  Rather cleverly, SIMPLE  is also an acronym and each letter stands for something; so ‘S’ is for ‘Short on time’; the ‘I’ for ‘10 ingredients or less’ (cue much laughter); ‘M’ for Make ahead; ‘P’ for pantry; ‘L’ for Lazy and ‘E’ for ‘Easier than you think’ (outbreaks of hilarity once more).  Most recipes in the book fit into two or more of these categories.  Some, such as ‘Chilled cucumber, cauliflower and ginger soup’ fit into as many as four.

The reasoning behind this ‘traffic light system’ is that different people have different ways of cooking simply; that depending on the sort of person and sort of cook you are you will have a different way of putting a meal on the table to make it ‘relaxing and therefore fun’.  This is an interesting and novel way of approaching the preparation of a cook book and in this day and age, however famous you may be, you do need an idea or a theme to differentiate your book from those of the many others out there (I should know, even back in 1981 when Top Level Cookery for Two came out it was necessary to have some sort of ‘angle’).  This looks as if it could well be a best-selling cook book out in time for Christmas.  It reflects the enjoyment had by Ottolenghi and his collaborators (Tara Wigley and Esme Howarth) in the production of the book as well as the joy and pleasure to be had from preparing meals for those we care about. 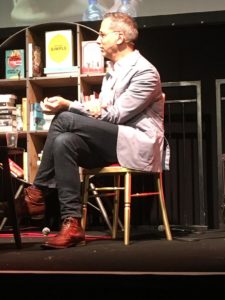 When, or if, you next go to a literary festival it is also worth remembering that some of the greatest authors, particularly in the world of fiction, are not always natural speakers or interviewees.  Some are best left to produce their masterpieces alone in their studies.  Their ability lies on paper.  Others, like Ottolenghi, are the sort of people who enjoy a live audience.  He is a ‘people person’.  He admitted to enjoying much more the production of his latest books, produced as collaborations, than the earlier ones which were done on his own.  The teamwork for him adds to the enjoyment.  On this occasion, the teamwork of Rachel Cooke and Yotam Ottolenghi made for an entertaining and enjoyable afternoon for the audience, who will no doubt not only be snapping up copies of his latest book, but also hot-footing it to one of his restaurants (all in London, I’m afraid, for those who live elsewhere in the country, or indeed the world).