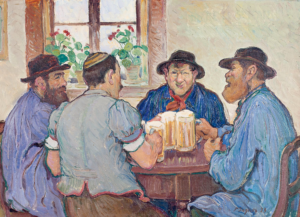 Picture the scene.  At a table in a saloon bar of a Yorkshire pub in 2040, four men, down on their luck, reminisce about the good old days of the 2020’s.

“Who’d a thought 20 years ago we would have been sittin’ ‘ere drinking cheap lager,” says the first.

“Aye, in them days it were fine Provence rose,” responds the second.

“You thought you ‘ad it good?” says the fourth.  “ That were nothin’.  Under t’Labour government of 2020, ah ‘ad high minimum wage, only ‘ad to work 32 hours a week and was put up in an empty 4-bed detached house cos someone ‘adn’t managed to let it”.

I won’t labour the reversal of the classic Monty Python sketch further (although it could get more surreal than the original given John McDonnell’s suggestion that No. 11 Downing Street could be used to house a homeless family), but it does serve to illustrate the point that both the Chancellor and the Shadow Chancellor have been making very generous promises to the people.  The problem is that they could prove very expensive.  Much of the debate hitherto has been on how prospective government’s will pay for ever-increasing spending policies.  However, the greater issue coming from the party conferences may be more one of how companies will pay wage bills that are not set by the marketplace but by the government.  This is a dangerous game.  As we move to a post-Brexit world where UK businesses may be hard pressed to compete internationally, saddling them with wage increases that have no relationship to productivity could make life very difficult.

Let’s focus on this week’s proposals from Sajid Javid, not because the opinion polls suggest that they are the most likely policies we will be faced with, but that they are (surprisingly for a Tory government) more generous than those of the Labour Party.  Increasing the minimum wage from £8.21 to £10.50 an hour by 2024 is an eye-catching announcement and one that, all things being equal, would be hard not to celebrate.  This would push minimum wages to a point where they were two-thirds of median incomes and, perhaps most significantly, to a point where they were the highest in the developed world.  So what’s not to like? In fact, why not set our sights even higher? Well, as ever, someone needs to pay.

There are a number of difficulties in picking a high number for the minimum wage.  The first to note is one for the government.  20% of all low paid workers in the UK (currently earning less than the Living Wage) are employed in the public sector.  A reasonable proportion of those jobs are outsourced, but 725,000 are not.  Mr. Javid’s proposals come at a big cost to the government (although some money may be returned in increased tax receipts).  However, the much bigger cost will be to the non-government corporate sector, with around 4 million workers seeing pay rises which could cost businesses around £16 billion.  Increasing the minimum wage to £10.50 by 2024 is equivalent to just over 6% per annum.  This is three times the targeted rate of inflation.   For UK businesses in general this may not be an issue if it is accompanied by an equivalent increase in productivity.  If not it will mean a cut in profits, potential losses and even bankruptcy.   As we have discussed in these columns before, the UK’s rate of productivity growth has been dire.  Output per worker fell by 0.2% in the second quarter of this year, and by 0.6% year-on-year.  If some labour costs are rising at 6% and productivity is falling, the outlook for UK businesses will be bleak.

There is of course an undeniable case for making sure that the minimum wage keeps pace with inflation, and businesses in general will have been basing their forecasts on the targeted rise in the minimum wage to £9.45 by 2024.  Now they are looking at a number that is over 11% higher.  There is a much bigger debate to be had over what should be regarded as the basic income, and this would take into account universal credit as well as looking at the concept of a universal basic income, where the government would guarantee a certain level regardless of employment.  Without reaching conclusions as to where the state subsidises the rise in minimum wages, it will be difficult for many businesses to endorse Mr. Javid’s proposals.

Carolyn Fairbairn, the CBI director general has said that “increasing productivity is the only way to sustainable pay rises” and Mike Cherry, the Chair of the Federation of Small Businesses has said that the new proposals could make many small firms unviable.  Low productivity may not always be regarded as a bad thing.  UK companies have tended to retain labour during a downturn as the costs and difficulties of rehiring when things pick up can be onerous, and the “gig” economy (while having some unacceptable connotations) contains labour costs and does make for a very flexible work force.  The underlying problem with the Mr. Javid’s approach is that it is starting at the wrong end of the issue.  Policies that help make UK businesses more productive and more competitive, by encouraging business investment, will make them more profitable and hence able to sustain a greater wage bill.  Starting with wages just makes the problem so much harder.