But not their owners.

Reading my daughter’s copy of the Veterinary Times over the weekend I was left spluttering, if not speechless.  The issue was a recent survey (vets, like everyone else, seem to have been conducting numbers of these recently) which ‘discovered’ that one fifth of UK vets regret their career choice.  That finding was not exactly a surprise.  Nor indeed was the fact that almost 10% would like to leave the profession entirely.  I was almost amazed it wasn’t more.  It has been very evident from conversations with my daughter and her friends, as well as articles in the profession’s press, that there is currently something of a crisis in the veterinary world.  Even the national press has commented recently on some comments made by a speaker at the BSAVA Conference*.

I wasn’t really astonished either to find out that the single aspect vets disliked most about being in the profession was clients, closely followed by working hours and work-life balance.  Few surprises there honestly.  No, what had me spluttering over my coffee was a comment by the managing director of veterinary business consultancy, Onswitch.  After the various preliminary comments which were reported, she said ‘Hating our clients is about attitude and I think this shows we’ve got an issue that is beyond recruitment… We have to embrace, engage and empathise with our client base, and if that’s the thing you don’t like doing, this is a tougher one to crack than paying you more, getting your hours sorted and getting better management.”  This misses the point almost entirely.  (In spite of the use of the word ‘we’ and the reference to ‘our client base’, I have to assume this woman has never worked as a vet herself and is just another businesswoman trying to advise vets on their business model.)

Vets are amongst the most empathic members of the human race.  It is that very empathy which leads them into the profession in the first place and it is that same empathy which exhausts and drains them when combined with long hours, crazy working patterns and demanding pet owners.  It is not the vets who lack empathy, but the clients.  Unfortunately, pets, or animals of any sort, don’t come without humans and not all humans have empathy.  These days many are entitled, exacting, lacking in any awareness or understanding of how the veterinary profession works and unappreciative.  Very commonly held views are that vets are ‘raking it in’, are very expensive and are exploiting the pet owners who pay them.  Many people also seem to have the rather odd view that because vets have gone into the job because they love animals they, the clients, are entitled to demand extended credit, payment by instalments or even to be let off any payment at all because they are ‘having a tough time’.

A year or so ago there were some jokes and cartoons doing the rounds amongst young vets.  In one of them a couple of diners were explaining to a restaurateur that they would like to pay the bill over 6 months as they currently had ‘a lot of commitments’.  You can see the point.  Owning an animal is an expense and yet somehow it is an expense which is overlooked by a great many when they take on the responsibility.  They consider it quite acceptable to ask for credit terms at the vets and yet wouldn’t dream of doing the same if they go out for a meal.  Vets may love animals, but they are running businesses which require not only investment in people (nurses and receptionists as well as vets), but also in equipment, some of it very expensive.

It has been pointed out before now that part of the problem in this country is that NHS services are ‘free at the point of delivery’.  This does not mean of course that they are actually free to most people, but simply that we pay the costs in our taxes and social security payments, not when we receive the service.  However, this does have the effect of there being little understanding of the actual costs of procedures, hospital stays or medicines.  This total lack of transparency or evidence of what it costs to do even relatively simple procedures like blood tests or x-rays (when taking into account the costs of the equipment, the premises and the staff) means that when it comes to having their pets treated, many people have no clue why it should be, in their eyes, so ‘ expensive’.

Even when they take out pet insurance to cover the possibility of needing treatment, many pet owners are often suspicious as to why the vets ask them if they have insurance.  In the eyes of some it is simply so that they can charge more.  It is not.  It is because running businesses (which frequently do a certain amount of pro bono work in any event for charities such as Blue Cross – without which work, by the way, those charities could not exist) it is simply not affordable for vets to start expensive treatments which the pet owners have no means of paying for.  It is the pet owners who should have thought of this in advance; it is hardly the fault of the vets on the front line. 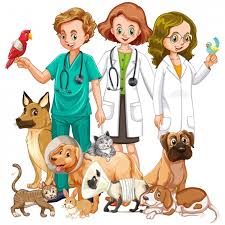 The vets on the front line in these situations are often, in spite of public perceptions, not well-paid, either when compared with other professions or in general.  When one considers the long years and difficulties of training (e.g. holidays spent doing compulsory placements, not only unpaid, but where they frequently have to pay for their accommodation and transport), it is amazing so many enter into and then complete the training.  Recent analysis of Government data by Indeed.co.uk and also financial services company Satsuma apparently showed that although veterinary graduates scored quite well in the early years in terms of remuneration, the growth in their salaries over ten years actually left them earning no more than immediately after graduation.  These rather odd findings could of course be due to factors particular to the profession; falling retention or the high proportion of females in the profession who take time out for a family or move to working part time.

One of the biggest issues within the profession currently, that is something of which not many of the public are aware, is the very high proportion of practices which have in the last few years sold out to corporates such as CVS and IVC.  Your cosy rural practice, which still bears the friendly old name you were used to, may well now be part of a very much larger company.  CVS has bought up large numbers of practices in the last few years and now proudly boasts the ownership of over 500 practices in the UK, Ireland and the Netherlands.  IVC even has a separate ‘Sell Your Practice’ section on its website.  Unlike the vets and the nurses it employs, these corporations do not care about animals, but do care about the bottom line.  Their business model does not often take account of the way vets and vet nurses think and operate, but they are the ones who are forced to deal with disgruntled clients (as well as corporate pay structures and unsympathetic timetables).

As the MD of Onswitch quite rightly identified, ‘hating’ your clients is hardly a recipe for a good business model.  That is probably in any case far too strong a word to use.  I suspect most vets do not ‘hate’ the majority of their clients, simply those who are objectionable and unappreciative.  However, 76 percent of vets, according to yet another survey (Voice of the Veterinary Profession, autumn 2016), went into the profession driven by an interest in caring for animals.  It is a real tragedy that nearly 20 percent who did so regret that decision and if one of their biggest difficulties is with the humans who bring in the animals then there seems to be a burning need to educate those humans.

Young women (and the profession is now 90% women) should not be having to be on call one or two nights a week or weekends, start again on Monday morning and have to face endless complaints about bills or treatments about which the owner actually knows nothing but feels unreasonably dissatisfied.  Of course, every so often there will be a very valid reason for complaint.  There is incompetence and negligence in every field, but the default attitude of large numbers of those who are using the service should not be, as it seems to be at the moment, one of discontent.  The consequential resentment in those providing the service threatens to make it less and less user friendly, as the vets with empathy and understanding leave the profession to those corporate-minded individuals who really are in it for the money.

What the veterinary profession desperately needs at this point is not management consultants suggesting that they need understanding and empathy towards Scrooge-like clients, but a PR machine that concentrates on showing the public the realities and difficulties of a vet’s life and explains and enumerates how the costs on their bills are broken down.  That way, they may have not only healthy animals, but humans who, instead of grumbling, are grateful.  That way, instead of aggression and disrespect, there may be appreciation and recognition of the work done and the service provided. Without that PR machine, I fear that even more vets will leave the profession and the numbers entering will also drop.

*The speaker blamed some of the problems in the profession on the ‘Herriot effect’ or the way ‘the novels of James Herriot have given the public a misleading view that they can pay for vets with cake, and call them at all hours of the day and night’.