Not all equities are equal 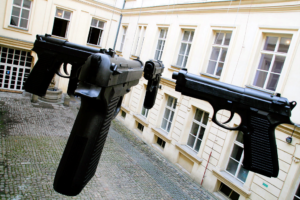 Investors face a classic Mexican standoff. Do they pull the trigger on ending equity investment ahead of a potential major correction and accept the impact of negative real (and possibly nominal) yields on the defensive play of bonds and cash? Or do they sit in equities and see the healthy returns of the last 10 years slip inexorably away? It’s a tough choice, but the answer may lie in rotation rather than revolution.

Last week the S&P 500 saw its first back-to-back 1% daily drops of the year, and at one stage the FTSE 100 was down 5% in just a few days. The market is at best skittish and when one looks at the data it is easy to see why. In the UK GDP shrank by 0.2% in the second quarter of the year and weak Purchasing Managers Index (PMI) data, most notably for the dominant services sector, point to a negative GDP figure for Q3 also – technically we are probably already in a recession. The situation is the same in Germany where, the industrial and services PMIs are pointing to a downturn for the first time since 2013. In the US the services sector PMI also fell sharply, registering its lowest level for 3 years. These leading indicators are already translating into weaker growth in many areas. UK car production is at a 7-year low, retail sales for September were the worst on record, and house prices grew at their slowest rate for 6 years. Employment data has always been a source of solace for the bulls, and the US market got some respite after healthy payrolls data last Friday. However, labour market data is a lagging indicator and in the UK job vacancies are already rising at their weakest rate for 8 years. Take all of this with the ongoing international trade war and Brexit uncertainty and you have a distinctly dodgy outlook for corporate profits and the stock market.

What are the choices? The first possibility is to hold fire and give some respect to the collective wisdom of markets. Investors may not have long memories, but the pain of the market sell-off last December (the S&P lost 14% in Q4 2018) is still very raw. JP Morgan pointed out this week that the situation going into the final quarter of this year is much healthier, given that long positions have already been reduced significantly and that we may be already half way through a market correction. This is not “head in the sand” analytics. In fact, the concern for many may not be that they need to time their escape, but more that their innate caution has meant that they have missed much of this year’s market recovery, and may be actually thinking about getting back in. Some analysts, rather than advocating defensive trades still see the FTSE as having scope to get up to 8,000 early next year, not because of a Brexit solution windfall but do to there being value in markets at current levels regardless.

This supposed value in markets seems easier to justify in the UK than in the US. UBS this week released a report looking at the valuation of companies against their 10-year median, and found a number of UK companies that looked cheap on this basis, including the likes of BAT and Barclays. Further analysis of cash flow and debt-to-earning ratios also highlighted a number of UK companies, such as WPP, Taylor Wimpey, IAG and Polymetal. When one looks closely at the performance of the components of the FTSE 100 over the past few years there is a distinct divide. The star performers have generally been those who generate most of their earnings overseas, and the laggards have been UK stocks, particularly financials. There is some justification in the argument that this relative performance could be about to change. Recent reactions to Brexit news are quite telling. Days when a deal looks more possible see a prompt rally in the unloved domestic stocks and a counterbalancing fall in internationally focused companies, and the reverse when No Deal looks more likely – but the size of the latter is starting to diminish, suggesting that UK focused stocks are sufficiently beaten up.

Looking at a stark choice between equities and cash or bonds is not easy. At best the latter is going to generate a 2% return (and that is becoming very hard to find), barely covering expected (and targeted) inflation. Simple maths would suggest that, using an equity yield of around 3.5%, any fall in stock markets in excess of 1.5% is going to leave you better off out of the equity market. Given the list of risks out there, both domestic and geopolitical, the cautious option may seem best. However, prospects may be distinctly different for the active investor, who does not rely solely on passive index-based equity products. For those prepared to back a fund manager with a value based approach, or who feel comfortable making their own stock selections, equity markets may generate a better return over the longer period. As ever, we have to remember that much of the returns generated by equity markets can come on a few key days – if you are not holding stocks on those days it is impossible to recoup the lost performance. To go back to the opening analogy of having a gun pointed at you: “Do ya feel lucky?”