This week, conservationist Dr Jane Goodall (the primatologist and chimpanzee expert) was reported as suggesting that the Duke of Sussex may give up hunting because of his wife’s views on the matter.  Meghan is not and never will be a countrywoman.  ‘Townies’ (and many animal welfare activists) tend to have what are disparagingly known in the country as ‘fluffy bunny’ views about animals and their welfare.  Those brought up to understand rural life have a much more robust approach and are more likely to see nature as ‘red in tooth and claw’.  They are pragmatic about life and death.  Most would no more think of adopting an abandoned fox cub as attempt to keep an entire litter of fox hounds as house pets.  The fox cub rescued this week was found ‘wounded and alone’ not in a field or a wood but, unsurprisingly, in a London park.  It has apparently been named ‘Bobby’, after members of the Metropolitan Police Specialist Firearms Command were alerted to its presence whilst on patrol in Southwark.

Personally, I have never been quite sure where I stand on the sliding scale between these two viewpoints.  It is probably fair to say that my approach has been inconsistent.  Over the last fortnight that inconsistency has been highlighted.  Grey squirrels are normally on my hate list.  Apart from the fact that they raid birds’ nests for eggs and chicks, as a gardener with a beautiful walnut tree I curse the b…y things every autumn when the majority of the crop is lost to hordes of them converging here from all the surrounding territories.  In the spring I curse them when my expensively-purchased tulip bulbs fail to appear, having been dug up over winter for squirrel food.  As I don’t shoot, my partner has despatched more than the odd one over the years with neither of us feeling in the least bit guilty about getting rid of ‘vermin’.  Now, however, he is bottle-feeding, three-hourly, with specially purchased puppy milk, two survivors from a drey in the attic. 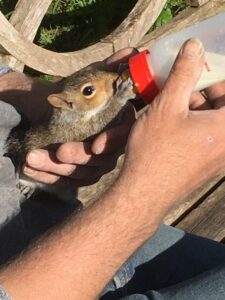 It started when I heard a desperate and pathetic squeak as I was gardening a fortnight ago. Looking around for the source of the noise I spotted a tiny squirrel on the terrace.  Knowing as I did that the scrabbling we had been hearing in the attic was from squirrels, not rats as we had at first thought, my immediate reaction was to alert the dog.  He was onto the case immediately.  A cross between Patterdale terrier and working Labrador, the terrier gene came to the fore.  An intense feeling of guilt overcame me as I contemplated the tiny body. Here we were in lockdown trying to preserve human life and I had, quite deliberately, if vicariously, taken the life of a baby wild animal.

When we later heard more sad squeaks and found the dog standing guard over one dead and one petrified baby pressing itself behind a flower tub, we felt we had no option but to rescue it.  A further two managed, without killing themselves or being killed, to get down from their attic home.  Mum had clearly lost her life elsewhere.  Three-week old baby squirrels are, of course, remarkably sweet.  They have huge eyes and cute fluffy tails.  They cannot yet bite.  They hold a bottle with incredibly dextrous ‘hands’ as they are fed.  Even the fact that we were about to have to deal with a litter of puppies did not deter us from our ridiculous squirrel rescue mission.

So, this is lockdown in the country.  The sun has been shining.  The dog walks have been a pleasure.  The garden, a quagmire for most of the previous four months, is looking beautiful as the white of the magnolia stellata gleams against the blue sky and those tulips which have survived squirrel raids stand tall, upright and colourful alongside delicate emergent palmate maple leaves, primroses, forget-me-nots and flowering comfrey.  We have eight gorgeous week-old puppies squirming around and growing daily in a whelping box in the kitchen and two equally rapidly growing squirrel kittens (the third, it has to be reported, was killed by one of its siblings) now in a large cage (originally for ferrets) in the spare bedroom.

As we queue at our now flourishing village shop, chatting (two-metres apart of course, but without the painted lines) in the sunshine, to people with whom in the ordinary course of events our communication would consist of little more than a cursory acknowledgement as we walked or drove through the village, it is hard to find a great deal to complain about.  Of course the world may be going to hell in a handcart, but here in rural Devon (albeit only three or four miles off the motorway), life as a semi-retired adult, a farmer or indeed a home-worker is not exactly hard or very different from ‘pre-coronavirus’ days.  We do not go to cafes on a regular basis (although there is a good one in our rather dull local town of Cullompton); decent restaurants are not exactly on the doorstep and theatres, shops and cinemas are all pretty much in the county towns of Taunton and Exeter.  As one acquaintance put it ‘Apart from the length of time it takes to go shopping, life hasn’t changed much.  I’m still trying to find the extra hours to take up those new hobbies and activities we now supposedly all have time for’.

What this shows is how dramatically differently (at least in developed countries) lockdown is affecting those in cities compared with those in more rural environments.  The idea that we are ‘all in this together’ is a charming one, but hardly accurate.  Living in a high-rise flat in any city around the world in lockdown with two, three or four frustrated and bored children of any age between 18 months and 18 years must be a nightmare.  Out in the country where urban distractions have always been lacking and the broadband is still frustratingly intermittent and useless, the rural pleasures of walking, cycling, riding and gardening, inter alia, come into their own.  These continue as usual.  True, more people than ever seem to come past the house on foot, horseback or bicycle, but on the whole we would be hard-pushed to get anywhere close to 2 metres from them.  So, although things are weird, we could continue like this for a while, (and the benefit to the environment is a definite plus), but what about those in cities?  More importantly, can the nation really afford to do so?

As Keir Starmer pointed out, we need more certainty.  Plans can be changed, but it would be good to know what the plans are.  The current state of uncertainty is the worst of all possible worlds as it allows for no planning at all.  The economy is a worry.  Mental health is a concern.  Indeed health in general is a cause for anxiety.  No-one is going to hospital.  Why are businesses which did not need to shut down, currently closed?  Why are garden centres and DIY centres shut down or only allowed to sell ‘essential’ items?  Who decides what is essential?  If Aldi and Tesco can continue to sell plants and farm suppliers can continue to sell compost, why on earth can the garden centres not be open for trading with the same social distancing rules in place?  Gardening has long been known to be beneficial to mental health and recent research and cases have confirmed this.*  There has rarely been a time when it is more needed.

If people cannot work from home but are forced to be at home, surely they should be allowed to do home improvements?  Indeed, those who cannot work from home are highly likely to be those most capable of practical work which they would perhaps normally be carrying out elsewhere.  Why are we shutting down businesses which could provide for their needs?  The old saying that ‘the devil finds work for idle hands’ contains more than a grain of truth and if we are to avoid increased domestic violence and mental health issues (not even to mention criminality which has certainly surfaced as an issue in Italy), surely we should be enabling those incarcerated to find useful, creative or productive things to do during this time?

The divide between town and country has never been greater.  The divide between rich and poor is also being exacerbated during this crisis and is likely to continue to an even greater extent once it is over.  Countries have to a great degree retreated into nationalistic positions.  It is hard to see from the way this has been dealt with around the world whether there is any hope at all of us being able to combine forces to ‘save the environment’.  It feels, rather sadly, that the inconsistency with which I view nature, and squirrels in particular, is multiplied the world over.  We worry about recycling but the NHS throws away most of its PPE gear.  Reusable cups are suddenly no longer the thing.  Does Mankind matter more than everything else on the planet?  Do individual lives matter more than society as a whole?  All the time we are incapable of deciding where on the sliding scale we stand, the more inconsistent and ineffectual we will be at resolving the issues which are clearly going to need addressing once we have got beyond the current crisis.

* The Well-Gardened Mind by Sue Stuart-Smith