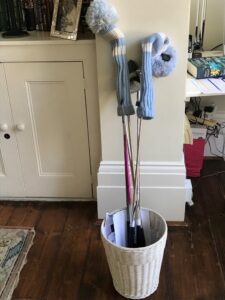 Question 1: Has Rory McIlroy thrown his golf clubs in a skip?

Question 3: Have you sold any of your investments or liquidated part of your pension fund?

The answer to the first two questions is,  (as far as I am aware) a resounding: “No!”.  Why would anyone dispose of their means of supporting themselves in response to a global pandemic? Unless you really need the cash, (and I appreciate that many will), the answer to the third question will likely vary according to your assets, risk appetite and age. But should it? I would argue that the rational response, unless you are desperate for money, should be no different. If we regard savings as deferred consumption, and necessary to fund our lives in retirement, why would we want to realise them now after a major sell-off? Like a club-less McIlroy, we risk taking away the long-term ability to sustain our lifestyles.

The arguments for selling equities and other assets have been compelling. The global economy has come to a shuddering halt. The Chinese economy, for so long the driver of global growth, has seen its worst performance for 60 years, the IMF predicts an impact similar to the 1930’s depression, with the UK economy already expected to see a quarterly fall in GDP of 35%. The scope to produce and spend has been severely reduced by the universal lockdown. On top of that, the dramatic increase in unemployment means that far fewer will have the resources to spend even with restrictions lifted. 16.8 million US citizens have filed for unemployment benefit in the last 3 weeks and there is talk of the unemployment rate hitting 20% – over twice the level reached in the last recession. In the UK almost half a million people applied for universal credit towards the end of March, and the OBR fears 2mn jobs could be lost. The impact on markets has been particularly severe given valuations that were, at the outset of the pandemic, demanding following an uninterrupted 12-year bull run.

Further justification for selling has been found from fast disappearing dividend income. Part of the argument for holding expensive equities had been the far greater yield compared with other assets, such as cash and government bonds. Now even those with healthy balance sheets are being ‘encouraged’ to not pay dividends. Some 120 UK companies have cancelled or suspended their dividends, amounting to some £11.8bn of lost income. Link Group calculates a further £23.9bn of cuts by year-end, with an additional £23.9bn ‘at risk’. If the main point of holding stocks was for income, take the dividend away and the justification seems very slim.

None of this makes holding anything other very liquid assets particularly appealing. However, while hindsight is perfect – and would we all have liked to have sold everything with FTSE above 7,500 – does it still make sense to sell with the market over 20% lower? Look at the experience of those who have. Anyone who managed to sell something between the 20th February and 10th March is likely to be better off as a result, but this may not be for long – and those who sold after then are currently worse off.  Given the time taken to cash in pensions, those who have done so are unlikely to be in a better situation. Even the most savvy investors think they are lucky to get market timing right and those with long memories know the opportunity cost of being out of markets. Recent sellers missed a market rally last week of around 8% – the sort of total return many hope for over the course of a year.

There is a danger of equating market performance to that of the economy. Markets have moved very quickly to discount the expected impact of the pandemic and, due to a short-term increase in risk aversion, may have over done it. I am not an epidemiologist or virologist and have no idea how long the worst aspects of the lockdown will continue, but I do know that my investments will be needed beyond its end. Yes, dividends are being cut, but many are likely to be only delayed, and those running businesses know that the support of investors is key to long-term sustainability. Indeed, delayed dividends may ultimately be helpful to the most viable companies, as they will have cash to take advantage of the opportunities presented – whether for acquisitions or buying their own stock.

Further, don’t forget the response of governments. Put simply they are ‘kitchen-sinking it’, with measures put in place at an unprecedented speed. The US $2trn CARES Act took a month to put together, compared to 8-12 months for an appropriate response to the 2008 financial crisis.  The enormous fiscal response by most major governments should help soften the hit to consumer spending. Monetary policy developments are also very supportive. The return of quantitative easing should help support most asset classes as the proceeds of government purchases of bonds (£200bn in the UK, $700bn in the US, Eur750bn in Europe) will be reinvested by the institutions that they buy from. Holding on to those bonds may be tempting but, with the German government bond market offering negative returns for any period up to 30 years at one stage recently, this is a sure way to guarantee losing money and purchasing power.

The big question here is: What to buy? There are many companies, particularly those struggling even prior to the pandemic, that will not survive, and already some household names (Debenhams, Oasis, Warehouse) are on the brink. Picking the winners and losers will be tough. My preferred option in the medium term is to buy broader index trackers, or to invest in funds with managers with a proven long-term track record.

None of this should be seen as downplaying the very real impact that the seemingly unavoidable recession will bring and many will sadly not be able to hold on to their savings. However, while past performance is never indicative of future returns, remember that with savings and investments the point is to be involved for the long-term – and keep hold of those golf clubs.