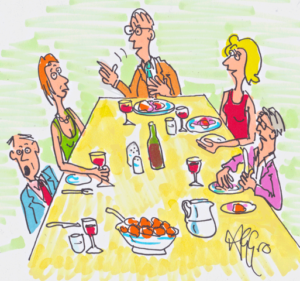 Just who are these “podes” who I’m supposed to be so much against?

I was tired of the English winter so I decided to spend my holiday entitlement on a trip to the sun.  Into the travel agent then for a few suggestions and brochures. There were a lot of ideas for adventurous people like me.  Let’s see.  Big game safaris in South Africa?  No, I’ve read King Solomon’s Mines and have no wish to end up relying on an eclipse to save me in the middle of a tribal war.  That’s out then.  Fishing off the Indian Coast?  Have you seen Jaws?  You must be joking.  Temples of Eastern Asia?  Are we quite sure that they have done with human sacrifice? The associated travel insurance looks expensive and I think I can guess why.  No, I wanted somewhere a bit more English, safe enough in its way but just slightly more exciting than anywhere the people around me in the office will have gone.  I have it.  A trip to Australia and New Zealand, Commonwealth countries with the Union Jack on their flags but far enough away to make me sound impressive and well-travelled, and to give me a good supply of anecdotes.  You know.  “I parked my car alongside the kangaroos and strode into the bar.  The corks round my hat picked up on the vibes and shook me into alertness.”  That sort of thing.

Yes, Australia and New Zealand it would be, and as luck would have it special test match tours were still available.  I had never actually seen a test match but I knew all about the ashes and it could only add to the holiday if I saw them being won.  “Brilliant bowling by Anderson” I could say in the pub on my return.  “Almost unplayable, poor Aussies didn’t have a chance.  Oh yes, I know what I am talking about.  As a matter of fact I was there.”  That should put those sports bores in their place.  No more excluding me from rounds of drinks just because I sometimes forget to bring my wallet.  I would have something of much greater value.  To shake my hand would be to connect with the glory of an England victory.  OK, I wouldn’t actually be playing, but what is it they say?  “They also serve who only stand and wait”.  Quite so and sitting in the stands must be just as good as waiting.

So Australia and New Zealand it was to be and I left the travel agent with my ticket in my pocket and a shiny brochure which made a lot of the friendly behaviour of the people I was going to visit.  A week later I was on the plane and it was then that I discovered that perhaps the brochure had exaggerated a little.  You see I have been very well brought up and know all about dinner parties at Buckingham Palace.  That doesn’t mean that I have been to any of course, but I have watched “Victoria” and “The Crown” and know that you make conversation with your neighbours alternately course by course: the first course with the person on one side, the second course with the person on the other and then back to the first person etc (there is no general rule about turning to the person on your right first since, if there was, everyone would end up speaking to the back of their neighbour’s head; that might not matter for the initial greeting but would leave something of a hole where a reply was expected).

Anyway I didn’t know the correct etiquette for long haul flights but presumed it had to be something similar so I turned to the person to my right and began to introduce myself with a short resume of my career.  I had only got to my A level results when they began to look edgy and lean away.  At first I thought this was shyness so I decided to crack a couple of jokes to put them at their ease.  In retrospect it would probably have been better if they had not been religious jokes, especially as my neighbour had a long beard, and when he rose to his feet I was worried that I might have caused offence.  Fortunately it was nothing like that.  He had spotted an empty seat over by the loos and decided to move.  Poor chap was probably worried about travel sickness and thought it safer to be able to get to the lavatory quickly.  Quite understandable.

It was then that I turned to the woman who had been sitting on my left to discover that she had completely disappeared.  That doesn’t mean that she had actually vaporised of course.  She was still physically there but was now completely hidden by the flight blanket which she had pulled over her head.   Poor woman, clearly afflicted by severe nerves.  It was my duty to distract her with some amusing anecdote so I lifted the corner of the blanket and peered underneath.

“Hello,” I said with my most charming smile.

“Erk,” she replied, burrowing deeper under the blanket and trying to pull her pillow on top.

“It’s alright, it’s only me,” I said comfortingly, pulling up another corner of the blanket so that she could hear.

“No comprendez English” she squeaked.  So that was it.  She hadn’t wanted to expose her ignorance.  Perhaps it was embarrassment or perhaps the Australian passport she was using was a fake.  No matter, there was no point in further conversation.  Still, if I hummed a bit she might find the music soothing. It was quite a surprise when I heard her chatting to an air hostess in English when we disembarked at Sydney.

Not very friendly, you might think, but nothing compared to the immigration staff.  “From the antipodes are we?” the official asked as he checked my documents.  Now I am no classicist but I do know that “anti” means against. So I am against someone, am I?  Some form of racist, I suppose?  What an unfair allegation!  I should like to make it clear once and for all that I have never met a pode and that if I did I would shake them warmly by the hand.  Where did that official get such a dreadful notion about my character?  I’ll bet that woman on the plane has been spreading rumours.