T is for Thank You

A tribute to Sue Grafton 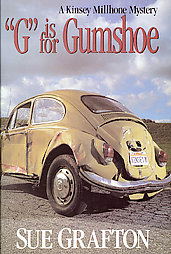 G is for Gumshoe, Grafton, Genius, Goodbye, and Gracias

Many years ago your correspondent was sitting by the maternity bed of a friend, she proudly nursing her newly born beautiful daughter.  More to your correspondent’s taste, on the bedside table was a newly published half read American crime thriller.  Once picked up it proved impossible to put down.  One day I really should return it.

That book is “A is for Alibi”, the first in what has become a monster series of books, each sequentially referencing letters of the alphabet.  They are by Sue Grafton, born and raised in Kentucky but for her adult life a resident of Santa Monica, California.  Grafton’s father was CW Grafton, himself a crime writer in a small way of business, and his daughter, seeking to make a living with her pen, became a screen writer in Hollywood.  She hated it and in 1982 wrote “A is for…” in the hope it would form a means of escape.  It did; Sue got to twenty fifth in the series, “Y is for Yesterday”, before her death aged 77 on 28th December last.

Fictional crime writing is a genre which is perhaps taken much more seriously in the United States than it is in the UK; many readers will no doubt have read Raymond Chandler and Dashiell Hammett, perhaps also Elmore Leonard and James Ellroy, and been impressed by their understanding and delineation of twentieth century USA.  But only true enthusiasts are likely to have read Ross Macdonald, a great star, perhaps the greatest, of the sector, strangely and sadly long forgotten by most – except crime writers.  Grafton was an early devotee of Macdonald, who became her hero and exemplar.  Many of his novels were set in the fictional Californian Pacific coast city of Santa Teresa (modelled somewhat on Santa Barbara).  When Ms Grafton began her venture into fictional crime she paid homage to Macdonald by setting her novels also in Santa Teresa, recognisably the same town but moved to the late 1970’s.  It is now such a familiar place that Grafton fans could easily drive around, shop, and dine there – and get, without any difficulty, to the police precinct and the morgue.

Macdonald’s private eye, Lew Archer, operating immediately post Second World War, was the archetypal hard-bitten tough single male gumshoe with a penchant for strong liquor and cutting corners.  Grafton though introduced us to the late 1970’s Kinsey Millhone, single female of about 30, perpetually broke, working as a private eye for little money, a bit of a loner, unlucky in love, living in a rented cottage next to an elderly baker, the only man she can really rely on in life.  She keeps fit, likes junk food, has an old VW and is vaguely obsessive about keeping home and office tidy.   She is a totally believable exemplar of her time and type; indeed all Grafton’s characters are subtly drawn and convincing.

Whilst nobody would go so far as to mark-up Grafton as a modern Dickens she draws through Millhone and her circle, and life and death in Santa Teresa, a series of  insightful sketchings of modern America.  Grafton flagged a little in the middle of the series (though she certainly never wrote a book which is not a good read), but by the end she was writing again at peak form.  The 25 books move over only about eight years, enabling her to keep the characters and settings tight (and keeping out most of the technology which has so much changed the life of the private investigator).  She guarded her franchise fiercely; she was too ill to write what would have been “Z is for Zero” and gave strict instructions that nobody else was to write it either.  She allowed no film or TV treatments and her children  have said that policy will be maintained.   So you have no choice: go read them!

Sue Grafton’s Alphabet series is widely available from any good bookshop, mostly in paperback but some also in hardback.  Also worth finding are Ross Macdonald’s Lew Archer novels.  No, you may not borrow mine.