I Am Prejudiced (Part 2)

Did you do the race Implicit Association Test?  How did you do?  If you don’t know what I’m talking about, please read the first part of this article in last week’s issue, otherwise the following won’t make much sense.

Well, I took the test for the third time on Tuesday.  And as I suspected (or feared?) my result was as follows:

So, in the space of nine days, completing the same test three times, I have changed from “moderately” preferring black people to whites, to being neutral, to strongly preferring white-skinned people like me.  Moderately racist, not racist, strongly racist.  Okay, I moved countries in that period.  From the UK to France.  But I am not aware of any black person in Toulouse giving me grief and triggering unconscious racism as I passed through to my bit of la France profonde.  Frankly, this test is tosh and Harvard University ought to be ashamed of itself for backing it.  For it is dangerous tosh.  As I wrote last week, millions of people, the majority of them US American, have taken this test as a one-off on Diversity courses.  Around 80% have been told that their test data suggests they are at least mildly racist, even if they think they are not.  They are being conned.  And when people realise they are being conned, as they increasingly are, they not only reject the test results, they reject all that they have been taught.  And they are convinced they are not racist when in fact they may be.

Stereotyping of others is as old as the human race.  Nigel Nicholson, evolutionary psychologist and Emeritus Professor of Organisational Behaviour at London Business School, had this to say in How Hardwired is Human Behaviour? in the July-August 1998 issue of the Harvard Business Review:

“To prosper in the clan, human beings had to become expert in making judicious alliances.  They had to know whom to share food with, for instance – someone who would return the favour when the time came.  They had to know what untrustworthy individuals generally looked like too, because it would be foolish to deal with them.  Thus human beings became hardwired to stereotype people based on very small pieces of evidence, mainly their looks and a few readily-apparent behaviours…  People naturally sort others into in-groups and out-groups – just by their looks and actions.”

Nicholson is not saying that we are born racist or biased in a specific way.  But we are born to fear and distrust.  If raised to fear and distrust people of a different colour then we will do so.  Research in the last decade by neuroscientists and psychologists repeatedly shows that we are all prejudiced in some way, though they seem to prefer the word biased.  But we are not all racist, not even 80% of us.  We all have subconscious (or, if you prefer, implicit) biases.  And explicit ones too.  Accept this and we can start trying to solve the huge problems that such biases cause.

But forget most of the Diversity training on offer.  It doesn’t work.  Don’t take my word for it.  University College London neuroscientist Lasana Harris had this to say about such training in the 29th August issue* of the New Scientist: “…it doesn’t work for a variety of reasons.  One is that it’s usually mandatory, which means people are not motivated.  The second reason is that it usually serves a legal checkbox function…  So they think ‘I’ve done unconscious bias training, so I’m not biased.’ ”

And now the Donald wants to ban Diversity training for US federal staff.  Not sure what his reasoning is.  Something about it denigrating America.  But no matter.  For once, he’s right.

I was introduced to Diversity training before most Europeans.  BP America were pioneers of it in the late 90s and I was asked by BP in the UK to go over to Cleveland to sit in on a two-day course being run for their American staff.  I was tasked to see if it could be run in the UK for BP’s staff there, suitably adapted for British sensibilities and issues.  The twenty or so participants in Ohio were all white.  Our trainer was a vast, black Texan.  The course blurb told me I could expect all my prejudices to be examined.  But it was soon clear that there was only one prejudice that was on the menu for us white participants – racism.  I didn’t object and nor did anyone else.  Best to focus on the prejudice which has surely blighted more American lives than any other.  Our trainer was charismatic, informative and very persuasive.  We took no dodgy tests (IAT was in its infancy).  We got a lot of statistics.  We played games, most notably Prisoner’s Dilemma, though the relevance to racism of any of them was unclear.  At no point were any of us made uncomfortable; asked, for example, to put ourselves in the shoes of an African American on the receiving end of discrimination at work.  I asked our trainer at the end of the first day if we were going to do some role-play with him.  “Too dangerous.  People will get angry and upset” was the gist of his reply.

It wasn’t a waste of time.  I learned a lot.  So did the three women sitting next to me.  They worked in BP’s credit card processing office and cheerfully admitted at the start that they had never been outside Ohio.  They quizzed me in the first break:

“Well, kinda bad.  Sorry but it doesn’t make us feel good.  We bin talking about it.  Is that how you all talk in England?”

I laughed.  “No!  There are plenty of English people who don’t like my accent either.  How would you say?  Preppy?”  Then it hit me.  “Have you seen ‘The Lion King’?”   They had and one of them lit up.  “Hey, you’re Scar!  The bad lion.”  She was right.  I sounded like Jeremy Irons.  We then had an enlightening discussion with the whole group, led by the trainer, on which nationalities down the years had been used by Hollywood to depict the bad guys and what effect that may have had on how we see such nationalities.  Towards the end the trainer asked us how blacks were portrayed in movies and to name a black hero.  Black Panther was still twenty years in the future.

Was any of this training going to make a meaningful difference to the working lives of BP’s UK staff, especially those working out on the oil and gas platforms in the North Sea?  Not unless the training did make people angry and upset by getting them to feel what it’s like to be at the wrong end of discrimination.  Too dangerous, thought the HR people in BP.  Not for us then, I said.  I’ve never regretted walking away from what would have been a lucrative training contract.

So, is there any kind of training which could make people less prejudiced, more willing to question their ingrained assumptions about The Other?  Yes.  But it would have to deal with people’s emotions, not just their intellect.  Groups would need to be small and diverse, making it easier to confess being biased or being on the receiving end of discrimination.  Realistic case studies should not simply be discussed and correct behaviour agreed upon.  Participants should be made to deal with skilled actors playing the part of the prejudiced boss, the biased interviewer, the racist colleague.  The key is to get people out of their own shoes and into those of someone who they may be biased against.  Such a course would at least make the participants question their prejudices.

Companies can do a lot to deal with discrimination in the workplace.  Anonymised curriculum vitae and diverse interview panels can make it easier for the best people to be hired regardless of race, sex etc..  Being prepared to work abroad in different cultures should be encouraged and rewarded.  It’s already well-known how much more productive teams are if their members don’t all look and sound the same (though only if they are well managed). 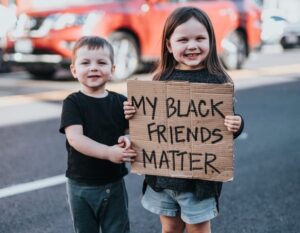 But to really lessen the strength of one’s prejudices, there is one clear answer: get to know people in those “out-groups”.  As I mentioned in an article in June, I was brought up to hate the Japanese.  So, when asked to go and run my company’s Tokyo subsidiary, I initially refused.  In the end I realised how stupid I was being.  Here was a chance to live and work in an utterly different culture, something I usually relished doing.  So, I went.  Do I hate the Japanese now?  Certainly not. Have I lost all my prejudice towards them?  Not entirely; the values and world view of my Japanese friends are so different from mine.  They admit openly to their prejudices towards foreigners.  We should be as honest about our biases but, unlike most of those same Japanese friends, keep questioning the assumptions that underlie those prejudices.  In other words, stop prejudging people and their behaviour.

*I read this issue while waiting to catch a plane last Friday and after the first part of this article had been published.  The cover story – Exposing unconscious bias – begins with “You are biased.  So am I.”  I promise I had not read this before writing the first part and choosing my article’s title.  Promise.