Not a new asset class 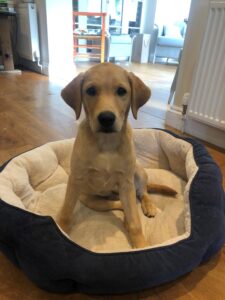 Meet Willa, aka Beelzepup (more of that later) – a puppy that encapsulates pandemic economics.  Based on the difference in her price to her predecessor’s (the much missed Lottie), the rate inflation for a puppy over the last 13 years has averaged 15% per annum – a 6-fold total price increase.  In real terms that means that, were Labrador puppies an asset class, they would have produced a total return very tough to beat.  Most of this increase has occurred in the past 6 months, with in many cases prices more than doubling, as those finding themselves working from home for an extended period sought the unconditional affection and the excuse for exercise that a puppy provides.  Does this mean that we should all give up our day jobs to become dog breeders? Definitely not. 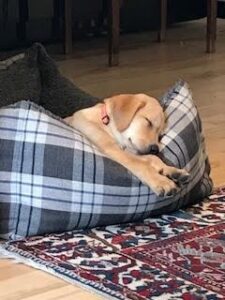 For breeders the numbers have become very compelling.  Perhaps the most extreme price increases have been for French bulldogs, where prices in excess of £9,000 have been recorded, when the prevailing level a year ago was around a quarter of that.  But given that she has the starring role here let’s look at Willa (she is after all the most popular breed in the world – I wonder why?).

A Labrador typically produces 6-8 puppies and, while 2 litters a year are possible, they are widely regarded as cruel on the mother.  With Labrador puppies currently costing £2-3,000, that means an average litter is currently worth £17,500.  A very attractive return, even if you bought a dog at the current inflated price.

Dog breeding has always looked attractive given the multiples involved.  The main discouraging factor was the high fixed costs; stud fees, worming and veterinary care, extra food for a pregnant and lactating female dog, extra bedding, heated pads for pups when not with their mother, a fund for a possible caesarean section, kennel club registration, advertising – the list goes on and should of course include the prospect of having to take unpaid leave to look after the whole brood.  Unless you are doing it at scale, when the dog costs less than £1,000, you are breeding for love rather than profit.  This would now appear to have changed given the pandemic price increase.

However, the key economic issue to consider is whether the price rise is sustainable.  It is very unlikely to be.  While it takes some time for supply to respond to the increased demand, respond it will.  The normal gestation period for a dog is just 63 days, and while larger dogs may take at least 9 months, many will be capable of producing a litter at 6 months old.  This means that dogs born at the start of lockdown could be close to producing a litter now.  In addition, where some owners may have been content to allow their bitch to produce just one litter, they may be encouraged to go further given the price.

The additional demand factor is much darker.  The cost of puppies has undoubtedly prompted a rise in dog-knapping.  Dog thefts are up at least 65% (the true data is difficult to find but is likely to be much higher) with, just a few weeks ago, 17 puppies stolen from one kennel in Suffolk.  Many of these dogs are being stolen to order, implying the involvement of organised crime.  The risks to the criminal are small, with fines being a fraction of the dogs’ resale value and, at present, no risk of a jail term.  Buyers need to be very careful regarding the provenance of their puppy; by law breeders should show them alongside their mother, but this can be difficult to verify, particularly as so much is being done remotely.

On the other side of the equation is demand.  Lockdown and limited exercise encouraged many to purchase a dog, and we should not ignore the positive mental health benefits that dogs provided during that period.  As people return to work, rather than working from home, for many the facility to look after a dog will rapidly diminish.  Not only will that reduce the demand for dogs, but it will also increase supply, with many unwanted puppies needing rehoming.  The market for second hand dogs is difficult, particularly as many will be wary of taking on a poorly trained (or treated) puppy.

While a return to work may diminish demand, the costs of owning a dog go way beyond just the time factor.  Beyond the costs of food, there is a need for insurance – not just because they are so expensive, but to cover unexpected vet bills and (perhaps most importantly) third party liability – dogs can cause accidents.  Beyond the statutory vet bills, there are other highly variable costs, and it is here that we return to Beelzepup, (sorry!) Willa.  It takes time to house train a dog, and the consequences in the interim can be expensive.  Chewing is the main issue, with carpets, rugs and furniture of particular attraction to Willa.  I refuse to enter into the calculation of the replacement costs, for fear of undermining the deep family bond already formed.  However, I will present an example of her destructive power: 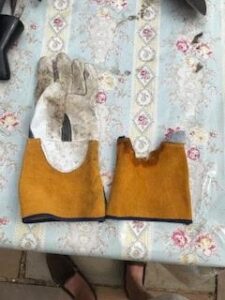 In many respects it is misleading to look at the increase in puppy value as any kind of return.  There will be breeders who have done very well out of the price increase, but the reputable ones are still more concerned to find good homes for their dogs, rather than maximizing their profit.  We should be concerned regarding the consequences of the price increase, which will lead to stolen dogs, bad breeding practice, and neglect.  For those decent owners there has been no change in the return, which was always unquantifiable.  Yes, recent buyers may have had to pay more, but who could argue that it wasn’t worth it?