“Did I mishear you say that the anti-Vietnam war protesters were naïve?’ asked the grey-haired woman indignantly when questions from the audience were invited.  We had been listening to Max Hastings, veteran war correspondent and historian, giving a talk about his latest book, ‘Vietnam: An Epic Tragedy 1945-1975’, during which he had pointed out quite forcefully that both sides were at fault in this long-running war that had caused so much damage to both sides, but particularly to the Vietnamese.  So, in response to the former protester, he responded politely that ‘Yes, he had used the word naïve’, because whilst the American intervention had its detractors for very obvious reasons, there was nothing admirable about the communist North Vietnamese either, as he had been at pains to point out during his well-delivered and informative talk.

This was just one of the events on offer at the Hay Festival last Friday, 31st May, during the second week of this annual literary festival.  Hay, however, is more than just a literary festival.  During the 31 years since it started, it has expanded to include musical performances, film previews and a full program of events for children.  On the green field site which it has occupied since 2005, consisting of a tented village with all the venues linked by covered and boarded walkways, the Hay-on-Wye cultural event offers a complete smorgasbord of talks, discussions and interactive events on almost every conceivable topic, taking in scientific discoveries, philosophy, history, nature, religions, natural history, sport and adventure as well as the novel. 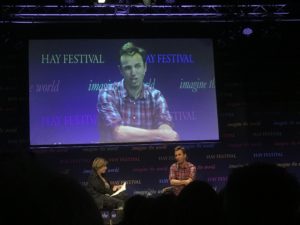 This was my second visit to the Hay Festival and was very brief, just an evening and a day.  With the advantage of previous experience, however, I knew that I did not want to try and find ‘a spare room within 40 miles’ and drive in to queue for the car park, so arrived armed with my daughter’s three-man mountain tent (they’d have to be three very small men!) and headed for the campsite – conveniently located just across the road from the Festival village.  This year’s festival was entitled Imagine the World and Hay invited attendees to ‘come together’ in a year which has had its share of ‘argument and division’.

The first discussion we attended, on Thursday evening, entitled National Identity and the Idea of European Unity seemed to promise much, but failed in the time available to ignite the audience or to get any real discussion going between the three speakers and the presenter/coordinator, Justin Albert, of the International National Trusts Organisation.  This was disappointing, probably for the speakers as much as the audience; but this was one of the ticketed-but-free events for which we had managed to obtain returned tickets, so the only loss was of time.  Shrugging that off we booked supper in the Grove restaurant on site and went to erect our little tent.  By 8.15 the restaurant was quiet, most people preferring to eat earlier, and our meal of locally-sourced produce (washed down with non-local Malbec, I’m afraid) eminently satisfactory.  (It is worth noting that Hay has been attempting for the last few years to reduce waste and, following the success last year of a reusable hot drinks cup, this year introduced a deposit scheme for all cups and glasses on the festival site). 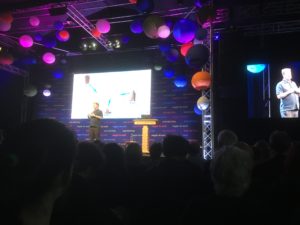 The following day’s lectures and talks more than made up for the disappointment of the Thursday evening talk.  Eschewing the chance to listen to Sir Robin Knox-Johnston or possibly to learn about ‘Neurodiversity and Autism’, inter alia, we plumped to start the day with philosopher, Julian Baggini, who delivered a fascinating talk entitled ‘How the World Thinks’.  From the moment he walked on stage, his enthusiasm was infectious and as he examined the way different cultures around the world had developed written philosophies from an almost identical starting point in time, he pointed out the importance of understanding the cultural differences and human similarities.  Wanting to know more, I succumbed to the temptation to buy the book (personally signed by the author in my presence, of course) in the Festival Book shop next door to the lecture theatre.

Next up was How the Classics Made Shakespeare,  by eminent Shakespeare scholar, Jonathan Bate, Provost of Worcester College and Professor of English Literature at Oxford University.  This, his latest book and the basis of his lecture, is an in-depth, but accessible explanation of how Shakespeare’s knowledge of the Classics from his grammar school education gave him the grounding and the imagination to become the leading light in the theatrical world of his day as well as a prolific poet.  Professor Bate revealed new links between Shakespeare and Ovid, Virgil, Seneca, Cicero and Horace and even if one’s own knowledge of Shakespeare may not have been in-depth, this lecture shed new light on the writer who has become our own modern classic.  I will perhaps be able to view Ben Elton’s well-researched comedy Upstart Crow with new eyes from now on. 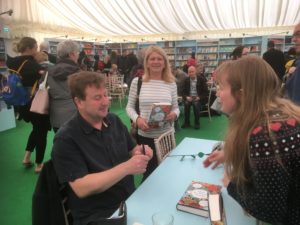 After a quick race round the covered boardwalk to the Festival Food Hall (where we had a wide choice of internationally influenced but locally produced fast foods to be eaten at large communal tables in the centre of the space), we returned to the Wales Stage to listen to Alison Weir, novelist and historian, talk about Anna of Kleve, the latest personality in her Six Tudor Queens series.  She put forward the theory that Anne of Cleves, as she is more generally known, had in fact had a baby before she was married off to King Henry.  Ms Weir suggests that it could be this fact that accounted for the King’s physical revulsion for Anne.  Basing her theory on contemporary accounts and descriptions (she dismisses the well-known, but much later comment by Bishop Gilbert Burnet, describing Anne as ‘the Flanders Mare’ as having no basis in any contemporaneous documents) she elaborates on the fact that had this been the case, Henry could not have insulted Anna (and hence her family whose political alliance was the reason for the marriage) by broadcasting this fact.  Whether speculative or not, all interesting stuff and woven in to Ms Weir’s latest novel – another one to read, perhaps?

Up next another novelist, Markus Zusak, author of The Book Thief, the runaway international best-seller published in 2005 and subsequently made into a film.  Markus Zusak, who, in spite of the European-sounding name, is solid Aussie from Sydney, has finally, after 13 years, produced his next novel, The Bridge of Clay.  Talking to Georgina Godwin, he was a writer whose personality seemed suited to the media and festival circuit in a way many are not.  He was outgoing and expansive about why it had taken him so long to come up with this next book – basically a combination of ultra-perfectionism and never-ending revision and rewriting, caused only in part by the fear of public expectation after the success of The Book Thief, a growing family and a lack of financial hunger.  Clearly a writer with imagination and a love of language.  I have been meaning to read The Book Thief for so long now – sadly I have not written a best-seller in the meantime.

In our final half-hour gap, we downed a quick cup of tea before heading over to the largest stage to listen to Max Hastings, having tossed up between this and attending Raynor Winn, author of The Salt Path talking to Claire Armitstead.  The Salt Path has now been recommended by so many people – including two passed when walking part of the South West Coast Path, which features in this apparently very moving book.  My friend went on to listen to two more lectures before she headed off (one on Saladin and the other on Elizabethan portraits by art historian Sir Roy Strong), but I needed to call it a day.  It had been a satisfyingly full day too, leaving me with plenty to think about on the beautiful drive out of the Brecon Beacons in the early evening sunshine.  Only later did I read in the Festival FAQs in response to the question ‘Who Goes?’ that although ‘Hay-goers have very little, socially, economically or politically in common other than the festival.  Debate results suggest they are sceptical about monarchy and religion, not much bothered about hunting, very bothered about illegal invasions of other countries conducted with no medium and longer term planning, and passionately engaged with the environment, good food and having a good time.  Writers say they’re exceptionally well-read and pretty smart’.  Well, of course we are – and maybe the indignant lady hadn’t been a protester in her youth but was just a typical Festival-goer, whatever that is.