Has Boris Lost His Balls?

What is going on?

“I can’t explain myself, I’m afraid, sir,’ said Alice, ‘Because I’m not myself you see.”*  Boris Johnson could well have said the same thing, as he set out his wonderful and illogical list of things we in England (other parts of the ‘United’ Kingdom have different rules and guidelines) will be allowed to do from 4th July and those which will still not allowed.

You can book into a hotel or an Airbnb (as long as you will be sharing a room, or a bed presumably, only with someone from your own ‘bubble’); go to the pub (as long as you give all your contact details before being served); get your hair cut (but not your nails – well, not at a nail bar anyway); go to the theatre (but not to see a live performance); get married with 30 people socially distanced in the church (but only two households or six people outside allowed for the reception) and so on.  You cannot go to a gym (unless it is able to run outdoor classes); nor to a lido (even though it is outdoors and has chlorinated water).  The list is long, complicated and seemingly completely without rationale, let alone Science.

We locked down nationally on 23rd March, supposedly for three weeks, to ‘Protect the NHS’ and ‘Save Lives’; in other words, to stop it being overwhelmed by the numbers expected to fall ill with this unknown new virus, Covid-19.  So far, so simple, even though such a move was, as the media was keen to emphasise, ‘unprecedented’.  It is the first time that so many states around the world shut down in order to save the lives of individuals.  But at what cost to so many others?

When the Hong Kong flu pandemic hit the world in 1968, it is estimated to have killed between one and four million people worldwide (the death toll to date from coronavirus is below 500,000).  However, because measures to stop the spread of the virus were mainly limited to hygiene and sanitation and did not include lockdown or social distancing, the longer term effects to the economy and to all other aspects of life were far less serious.  Recovery was relatively quick.

The long-term worldwide effects of the Covid-19 pandemic and the measures taken to control it are set to be serious.  For example, childhood immunisation programmes against diseases like diphtheria, polio and measles have been paused, putting children at risk of getting these preventable and potentially fatal illnesses, according to the WHO news release last month.  In East Africa, swarms of locusts, proliferating as a result of climate change and wars, devastated crops in February; further swarms moved in in April with delivery of time-critical chemicals and crop-spraying hampered by coronavirus.  This could potentially leave millions starving.

In this country it is estimated that many tens of thousands will have been affected by the inability of the NHS to deal with other urgent problems as a result of the focus on Covid, and the mental health issues resulting from lockdown are already surfacing.  The education of the nation’s children has been neglected and the teaching unions seem determined to prolong this state of affairs in the name of ‘elf and safety’, as Boris used to love to call it.  As for the economic fallout, that is set to be massive.  What is rather alarming, however, is that whilst other countries appear to have come out of lockdown and are getting on with returning to school, work and all other pre-coronavirus activities, we in the UK seem to be frightened and anxious about doing so.  More alarming still, our previously energetic ‘get-up-and-go’ prime minister seems to be suffering from post-viral timidity.

Investigations, inquiries and post mortems will almost certainly be held and it is a matter of public knowledge that Boris Johnson (in his former guise) was rather ‘gung-ho’ and wanted to avoid lockdown and go for herd immunity.  This he could not do because of the pressure of opinion, both from this country and from abroad.  (It would appear in any event that herd immunity would be difficult to acquire as antibody testing seems to show that antibodies to the virus last for a relatively short time).  Did this reluctance on his part mean we left it too late?  No doubt the post mortem inquiries will tell.  In the meantime, we are left with the fact that lockdown lasted not three weeks, but over three months and Project Fear II was almost too successful.  Home-working was embraced by those who could do it and being furloughed on a generous 80% of wages (capped at a maximum monthly amount of £2,500) proved quite attractive for those employees whose companies or businesses could not find work for them to do.  We may not be able to go abroad, but the weather here has been pretty good for most of the time and for those with even a small garden space and a nearby park and no financial worries, lockdown has probably been okay.

But what about those who fell between the cracks and who are still falling?  What about trying to get back to work and not being allowed to do so?  The self-employed were belatedly given assistance, and some are now back at work, but musicians are facing obvious difficulties going forward, as are pretty much all actors who are not famous; those who had set up businesses within the last year or 18 months and had not yet submitted accounts, got nothing; small owner-run gym businesses, nail bar and beauty salon owners have no indication of when they can start earning a living again (grants from local authorities, however promptly paid, do not cover four or possibly five or six months of lost income) and many of those now comfortably furloughed are likely to hit the buffers of unemployment within short order.  It is, I think, generally agreed that lockdown has gone on for too long in this country and that leadership to get us out of it has been lacking.

The government appears fractured and lacklustre.  The tedious daily briefings (now thankfully to end) urgently reported on the television news show few ministers in a very flattering light.  No-one is ever prepared to say that they do not know enough and they may have got it wrong.  The medical officers and scientists are generally downbeat and gloomy.  The U-turns and contradictions are dealt with as if they were somehow intended or certainly not the result of re-thinking or of public or backbench (or celebrity) pressure.  The examples of what is happening in other countries, if not ignored, are looked at and then decided to be inapplicable to the UK.  Deference to the Science as if it is some sort of powerful totem is resorted to at every turn – in spite of the fact that the science appears contradictory and uncertain and depends on where, how and by whom the research was conducted.  Leadership is needed.

Boris, as several journalists have pointed out, did appear a lot more chipper yesterday during his announcement than he has for a long while.  There was, however, not much sign of a return to the Boris we knew and loved (or hated as the case may be) in his words, which were reiterating the message that we needed to proceed with CAUTION.  He apparently trusts the public – just clearly not enough.  He did say people would have ‘legitimate questions’ about why some activities were allowed and others not.  No explanations though were forthcoming (other than that the virus has no interest in such questions) for those like the gym owners and the ECB (English Cricket Board) who were surprised or even shocked that their activities were not to be allowed to resume in early July.  It seemed simply to be that ‘we cannot lift all the restrictions at once’.

It does seem extraordinary that, knowing obesity is a major contributory factor to death from coronavirus (see ‘Big is not Beautiful’), the decision has been made not to allow gyms to open.  Whether they are machine or class-based, social distancing would hardly be difficult to achieve.  Cleaning should be no more difficult than for hotels or bars.  Knowing that his own brush with mortality was in part exacerbated by his weight, surely the Prime Minister knows the importance of exercise?  Yes, most of us, including the Prime Minister as he rather feebly cracked, need a visit to the hairdressers, and many are happy with walking or cycling outdoors, but for those who like to lift weights or do squats or lunges, can anybody explain the reasoning behind the latest announcement? 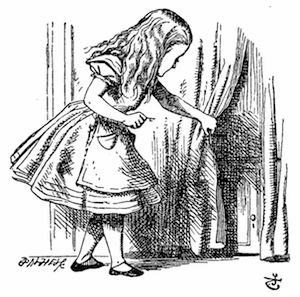 It would seem that the virus has had more than a passing effect on the PM’s mojo.  Perhaps as a keen cricketer (looking forward to a game of village cricket) he should take a holiday somewhere amateur cricket is allowed and cricket balls are not deemed a coronavirus hazard (Australia, perhaps, where they have banned using spit or sweat to polish the ball – a pretty unpleasant practice maybe anyway!)?  But then Australia is still not letting Europeans into the country (as our level of infections and deaths far exceed theirs) and he would have to endure 14 days quarantine on his return wherever he went – even if that country had far fewer deaths than we do.  ‘Curiouser and curiouser!’*

*Lewis Carroll ‘Alice’s Adventures in Wonderland and Through the Looking Glass’.