Pensions: Is your dad still eating your dinner?

Making the old subsidise the young may be a mistake. 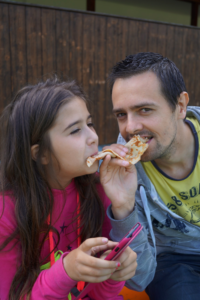 You must remember the feeling.  Your father comes home from work as you are eating your fish fingers, reaches over and pinches one.  It was intensively frustrating then and many contend that it is still going on now when it comes to pensions.  The argument runs that a large proportion of the older generation retired with gold-plated final salary pensions that have guaranteed them a comfortable retirement.  The weight of servicing these pensions has meant the closure of defined benefit schemes to force current employees into defined contribution schemes.  Essentially the obligation has shifted from the employer, who can no longer afford the DB pension, to the employee, whose pension is now subject to the whims of the stock market.  Similarly, those who were able to retire on a state pension at 65 are a source of irritation to millennials for whom a state pension feels like Catch 22 – the nearer you get to a working demob the more likely that the minimum age will rise.  On the face of it the younger generation has sacrificed its security to sustain their elders.  However, the issue is not that clear-cut and the debate risks alienating the generations and forcing potentially dangerous legislation to tax the old to help the young.

The problem is how to redress the balance?  The solution proposed this week by Lord Willetts would be to impose some sort of wealth tax on the elderly. The fact is that such taxes already exist to some extent in the form of inheritance tax and that it is difficult to enforce a tax on people who might be asset rich but on limited incomes. The other oft cited measure is ending the triple lock, where pensions are increased at the higher of average earnings, RPI or 2.5%.  The triple lock was introduced to correct a long-term lag of pensions against earnings.  This gap has largely been addressed so some prefer a new measure, possibly a double lock that excludes the 2.5% element.  However, such measures ignore a bigger problem than intergenerational incomes, that of the wide disparity within generations. There are still a huge number of pensioners in poverty in the UK (1 ½ million on current estimates, a significant proportion of them women) and, unless you target them separately, they need every bit of help that the triple lock can give them. Further, ending the triple lock will actually hit the young more than the old in the long-run, given that they will receive the most benefit of the compounding effects of increases over time.  Yet another suggestion is to make those who continue to work after the age of 65 pay national insurance.  Again this ignores a key factor, which is that many of these people are working because they have to, due to a prospective pension income that is insufficient.

What is increasingly clear is that disparities in income are correlated with factors other than just age – most notably geography (average household wealth in the South East is over twice that in the North East), occupation and education.  Promoting better learning outcomes and encouraging occupational and geographic mobility will do much more to help the earnings potential of young people than making the old subsidise their pensions. The other key initiative is to encourage greater pension saving.  Auto enrollment has helped (so far 9.3 million employees have got involved) but the saving levels are still insufficient, and the system still does not address a lack of retirement saving by ever-growing ranks of self-employed.  Compared to Australia, where pensions saving is compulsory for employers and employees, UK workers are only putting in about ¼ of the proportion of their income into pensions savings.  Over the next 2 years, those who put in the maximum of 5% to match their employer’s 8% contributions will be closer to what is needed but still some way from the optimum. Greater education and the promotion of financial inclusion will help – currently most young people do not have the access to the right information and/or do not trust financial advisors.

Promoting increased contributions is one way of correcting the imbalance; the other, more debatable, change is making further adjustments to the pension age.  In Scandinavia this has a much closer link to life expectancy, meaning that the pension age in Denmark is now 74.  Such moves are much easier in countries with smaller class inequality and require an early announcement so that people can adjust their plans.  There is also the risk that we might have to reduce the pensions age if life expectancy started to fall and some argue that such a move has already started in the UK.

The other thing we need to do is  ensure that those within existing schemes get greater protection so that they avoid being forced into the Pension Protection Fund and the cut in pension that entails. Companies like Carillion seem to have regarded money used to close the funding gap in their schemes as “dead” – being keener to reward executives and pay dividends. The investment industry has been complicit by clamouring for bigger dividend payout ratios. The only way to address this is to give The Pensions Regulator greater powers to enforce the covering of deficits.

When the Beveridge Report introduced the state pension after WWII, the average income of pensioners was around ¼ of the level of average earnings. 70 years on and that ratio is broadly the same. Overall older people are bound to be wealthier given that they will have benefited from a longer period of asset price growth, but they need much of that to fund their retirement. Rather than punishing those who lived lives on thrift that are now on limited retirement incomes, greater education, encouragement and incentives are needed to help those still in work to save more for their retirement. This includes enhancing regulation to make sure the obligations of employers are enforced.