Why has Japan done so much better? 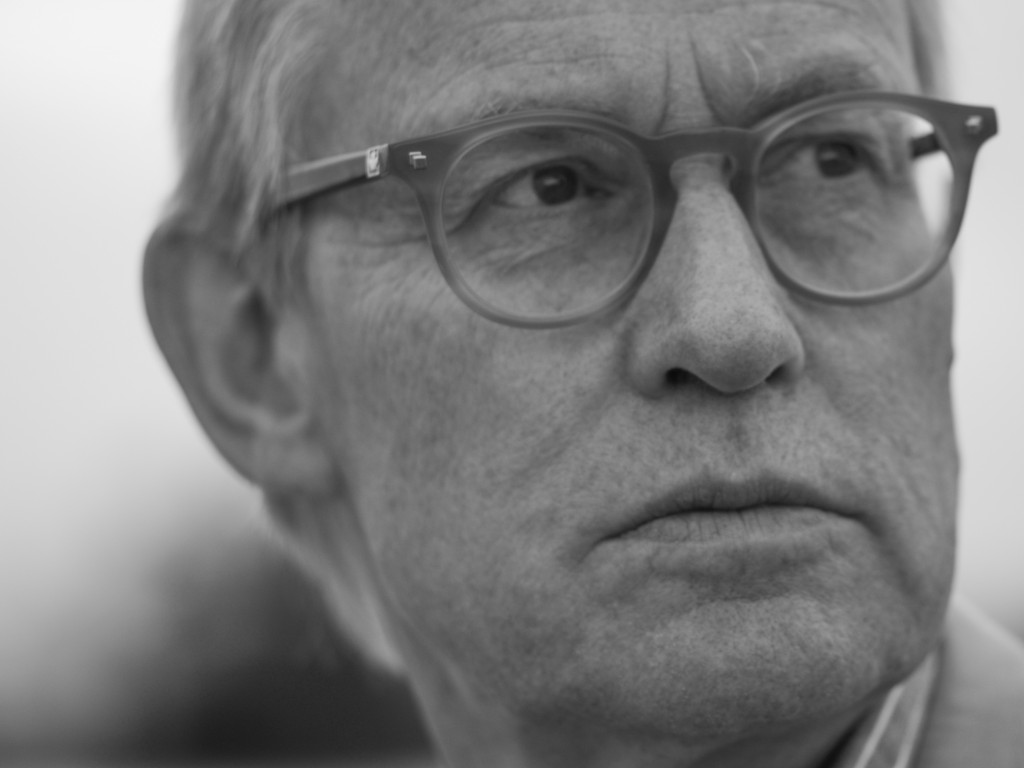 Imagine that you are travelling by train from London to Bristol.  How soon after leaving Paddington would you see fields, cows and woods?  20 minutes?  By the time you had got past Slough perhaps?  What if I told you that you would not see any countryside on the whole 200 kilometre journey?  Indeed that even if you travelled a further 100 kilometres on to Swansea you would still not see anything other than buildings and roads.  In fact, you would be in Pembrokeshire before you were free of this endless townscape.

That experience of never-ending city is the norm for anyone living in Tokyo.  Shizuoka, a city with 6 times the population of Bristol, is around 200 kilometres by train from the Japanese capital.  Okay, you can see Mt Fuji in the far distance on your way there.  But between its slopes and you there is a sea of buildings.  Go on towards Osaka, as I have done many times, and it is with relief you see lakes and forest-clad mountains shortly before arriving in Kyoto. Japanese Pembrokeshire!

Metropolitan Tokyo has a population of 14 million.  Greater London has 8.8 million people.  But there is no Green Belt around Tokyo proper.  Greater Tokyo has a population of 37 million, over half the number of people in the whole of the UK.  And in normal times at rush hour they all seem to be in the same carriage as you on the Tokyo subway, pushed in there by guards wearing white gloves.  No, that is not an urban myth.  In the early 1990s I had my own personal airspace on the subways of Tokyo and Osaka.  But these days my 1.8 metre height is matched by many of the younger Japanese men around me.

Each person in Tokyo has, on average, 19.1 square metres of “living space” (the average for all Japanese is not much more – 22.3 square metres).  Go on.  Get up and measure it.  If you were living on your own in Tokyo your flat would, on average, be less than 4 metres by 5 metres.  That’s probably smaller than your bedroom in the UK.   The Japanese Ministry of Land, Infrastructure and Tourism recommends a minimum living space per person of 25 square metres in order “to have a healthy and culturally-fulfilling life.”  Yet the Ministry admits that 69.5% of households in Tokyo have less than this minimum.  And 9.3% of Tokyo households have less than 10 square metres of living space per person.  Smaller than your bathroom?

So, the Japanese, especially those living in Greater Tokyo and other major cities, are packed together like the proverbial sardines – when moving around, when working, when socialising, when at home.

Why is it then that in a country whose first Covid-19 case was in January 2020 but which only partly locked down on 7 April last year, which returned to normal life in late May, and which only started another mild lockdown in the Greater Tokyo area last week, there have been so few deaths from the disease compared to the UK?  The figures are striking, especially when you take into account that the first Japanese state of emergency was nothing like as fierce as the lockdowns imposed across most of Europe.  Businesses, including bars, restaurants, hotels, cinemas, hairdressers, beauty salons and gyms, remained open throughout 2020 and remain open now.

I tried answering this question in two articles I wrote in Shaw Sheet in June 2020 –  “Get Closer” – Don masks and  “Is speaking English killing the British?” – the Japanese think so.

It is possible that one reason for the low number of deaths in Japan is that only those which doctors are certain have been mainly caused by Covid-19 are being recorded.  It is also possible, as I mentioned in the second article, that doctors are not admitting the truth when they write the cause of death.  Contracting an infectious disease is considered shameful in Japan.  But my research since writing that 6 months ago does not indicate that this practice is common.

One reason Japan appears to have done so much better than the UK is because of a much better tracing system organised by local governments.  They use well-trained nurses who target swiftly and effectively any cluster of Covid-19 cases which emerges.  Note that I didn’t say test and trace.  Relatively few tests have been done in Japan.  If a nurse knocked on your door and told you why you must self-isolate, I suspect you would do so.  Especially as you know she is likely to come back tomorrow and next week to check that you are still doing so.  No apps, no calls from ignorant people in call centres, no police threatening to fine you for disobeying; just flesh-and-blood medical staff who you trust.

There are other reasons.  Obesity (defined as a person with a Body Mass Index of over 30) increases the risk of dying of Covid-19 by 48% according to a study published by the University of North Carolina last August.  Only 4.3% of Japanese are classified as obese, compared to 36.2% of Americans and 27.8% of Brits.  It is possible that the BCG tuberculosis vaccine which all Japanese must have has conferred some immunity from Covid-19.

But cultural norms and behaviours are the most important reasons why Japan has done so well in combatting Covid-19.  This is not just the fact that “the Japanese have been social distancing for over 2,000 years”, the words of a Japanese businessman working for a British company last month.  He explained: “People hardly ever shake hands, hug or speak loudly; they seldom talk on packed Tokyo subways.”   It is also that the Japanese regard self-centred individualism as dangerous.

I asked a German friend 10 days ago what he thought lay behind Japan’s success.  Rudi now lives in Germany with his Japanese wife and children but spent much of his working life in Japan, where I first met him.  He and I used to run management training courses together in Tokyo for Japanese employees of such German firms as BMW, Bosch and Bayer.  After a long pause (he remains very Japanese in his behaviour), Rudi’s answer was short and to the point: “They obey and they think as a group”.

I hope you didn’t give out a derisive snort.  Or think: “Typical Japanese. Supine. Obey orders. Don’t or won’t think for themselves.”  How many times have I heard such stupid comments uttered by supposedly educated European and American businesspeople?  Too often.

Rudi went on to tell me what he meant by “obey” and “thinking as a group”.  Obedience is not so much to Japan’s rulers or employers or even the law.  It is obedience to society’s norms and customs.  In my experience, the Japanese have a very low opinion of their leaders and not a huge amount of respect for the police (and even less for their armed forces).  The Japanese people have been successful in dealing with the pandemic because they have accepted that it is their and their neighbours’ and friends’ responsibility to behave in a way that not only protects themselves but protects others.  Group-think does not mean you don’t have opinions of your own.  It means that you consider the opinions of others.  Consider is the key word here.  You are considerate of others.

This can best be seen, quite literally, when you look at any photo of the Japanese outside their homes and offices.  They are all wearing masks.  Well, nearly all.  Look at this photo, used in an article on Japan written in late March. 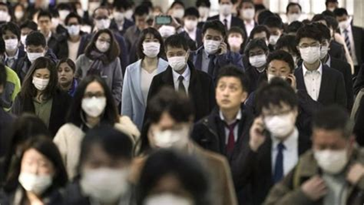 There is a non-Japanese woman not wearing a mask.  And one unmasked young Japanese who is looking nervously upwards.  At a CCTV camera perhaps?

The Japanese have been wearing masks en masse since 1918, though it was already common to do so in the late nineteenth century.  Why?  Because when Japan emerged in 1868 out of her 200+ years of self-enforced hibernation, the Japanese learned from their study of Western medicine that infections from disease could be hugely reduced by wearing a mask.  Even so it took the misnamed Spanish flu pandemic of 1918-19 to make it the norm to wear a mask throughout the winter flu season.  Studies have shown that anywhere between 257,000 and 2,020,000 Japanese died from Spanish flu;  the latter would have been 3.6% of the total population.  After the Second World War huge swaths of Japan were planted with evergreen trees to provide timber to rebuild her cities.  Result: mask-wearing was extended into May to cope with the pollen released by these trees.  Ask though any Japanese why they are wearing a mask, especially if you can see no evidence from rheumy eyes that they have a cold or hay fever, and they will tell you that they don’t want to give their germs to other people.

The Japanese have been asked by their government to avoid the Three C’s – Closed spaces, Crowded spaces, and Close-Contact settings.  Yet apart from a few weeks in April-May when the Tokyo subway was almost unused, the subway trains have been as packed as ever; closed and crowded spaces where contact is so close you…I’ll stop there (except to say that there are now women-only carriages on Tokyo’s subway).  Why haven’t the passengers all caught Covid-19?  The minister responsible for handling the pandemic, Nishimura Yasutoshi, told The Economist last month that “crowded subways pose little risk, if windows are open and passengers wear masks.”  He himself was sitting in a well-ventilated room across a large table from the journalist, behind plastic shields and with face masks on.

A meta-study of mask-wearing was published by Oxford’s Leverhulme Centre for Demographic Science on 26 June last year.  The headline says it all: “Face masks and coverings work – act now.”

Throughout this pandemic the Japanese have worn masks inside their homes and offices as well as outside when commuting to work, chatting to friends in bars and restaurants, and taking exercise.  I hate wearing a mask; I still can’t stop my glasses misting up.  But what freedom exactly is being curtailed by my wearing a mask?  The freedom to die?  The freedom to cause other people to die?  Our selfishness is killing us.

This article is one of a series about Japan, the previous one can be found here: “Shōgatsu” – The Japanese New Year in the time of Covid.