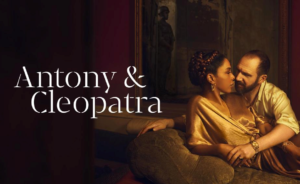 Why should theatre be forced into pigeonholes?  Antony and Cleopatra is not one of Shakespeare’s most easily categorised plays, sitting somewhere between history and tragedy, but with elements of high comedy.  Simon Godwin’s new production at the National Theatre refreshingly ignores the historical elements (as did Shakespeare in terms of plot) with a modern dress black tragi-romcom that works to near perfection.

Powerful performances from Ralph Fiennes and Sophie Okonedo exquisitely encapsulate how, divided by his love for Cleopatra and a battle for power with Octavius Caesar, the ageing warrior Antony moves from ambition through valour to the ultimate sacrifice. Whether you prefer David Morrissey’s more thuggish Antony in the Bridge’s recent Julius Caesar, to Fiennes more nuanced dupe does not really matter in a play that features Sophie Okonedo.  Her playing of Cleopatra has such energy and the “infinite variety” described by Enobarbus, that the audience’s attention is transfixed to the point where any of the productions shortcomings are easily ignored.  She is by turn shrewish, coquettish, smoldering and calculating; yet always utterly mesmerising.  Pity the poor messenger, Eros, who on telling Cleopatra of Antony’s marriage of convenience to Octavuis’s sister, suffers a near drowning, and Antony himself, whose emasculation at her hands is as brilliant as it is excruciating.

It would be wrong not to highlight the strength of the rest of the cast, particularly Tim McMullan as Enobarbus, whose reaction to Antony’s kindness after he had deserted him is truly heart breaking.  It is the contrast between such moments of pathos and those of black comedy that make this version so compelling.  Even at the point where Antony is dying by his own hand his Python-esque cry of “not dead!” gets a deserved laugh – although perhaps not one that the author might have expected.  While Fiennes age seems appropriate for the part (“though grey do something mingle with our brown”) and Octavius is suitably youthful, the latter’s portrayal by Tunji Kasim, while worthy of this production, is perhaps a little lacking in gravitas.  Gender blind casting for Agrippa, however, does allow a deliciously Machiavellian performance from Katy Stephens.

This is always a long play, but Simon Godwin’s care in extracting the humour and pathos from every one of the 40 scenes means that the narrative gallops at a breathtaking pace and the 3 ½ hours running time is not even remotely attritional.  As ever, the staging at the National is jaw dropping in its ingenuity and the use of a real snake (although thankfully not an Asp) adds a greater sense of jeopardy to the events that we know are about to happen.

This portrayal of Shakespeare’s most complex and powerful woman is perfect material for modern theatre – although the me too generation might want to rename the play “Cleopatra and Antony” or even just “Cleopatra”.  Tickets will not be easy to come by, but there will be a live broadcast at Cinema’s on 6th December.