Our readers may well be fed up to the back teeth with recommendations as to what to read in this period of forced semi-leisure.  But this column will risk two more; not romances or thrillers or even woke novels, not vast triple magnum opi, not even Trollope (either of them) or Blyton.  Ours will hopefully cheer you up – by convincing you that things could be worse.  Much worse.

Professor John Hatcher is a distinguished Cambridge don and his book, “The Black Death” is a detailed study of the village of Walsham-le-Willows in Suffolk, immediately before, during and after the Black Death epidemic of 1348 to 1349, using many medieval records, some extraordinarily obscure.  Like our current affliction, the Black Death had a nasty habit of creeping up on its victims; by the time they knew they had it it was too late to do anything about it, and it had been passed on to family, friends, and neighbours, and indeed casual acquaintance, without any respect for class, standing, or profession.  Not many recovered from the pestilence, though not everyone contracted it.  In about three years around 40% of the population of England died; in Walsham it was over 50%.  It must have been a time of the most harrowing sorrow and confusion.

It did have some unexpected side effects.  So many clergymen died that large numbers of young and inexperienced (and often unsuitable) curates were pushed into roles as parish priests.  Wages of all types of labourers and craftsmen increased, mostly doubling in a very short time.  The wealth of the surviving population increased markedly as assets were reallocated.  The better remunerated workers were able to eat much better and health seemed to improve.  There was a subtle but nevertheless real and permanent shift to end feudalism and to English governance becoming, if not yet democratic, at least to a degree by consent.

The Black Death was not the last terrible plague to strike society.  Others struck, sometimes nationally, sometimes regionally or even in single cities; most famously London in 1665.  The Spanish flu (misnamed; it probably originated in Kansas USA – though The Donald would say that was false news) broke out at the end of the First World War.  It attacked Europe and then the world, infecting perhaps a quarter of the global population, and killing around 3% of it – about 50 million people.  We have seen nothing on that scale by virus since – though a few C20th dictators had a go at rivalling those death numbers.  We still have some killer diseases such as typhoid, tuberculous, and ebola, and if you contract any of those your outlook is not good – especially ebola, of which roughly half notified cases die.  Modern medical science has not conquered such nasties, but has made them much less common.  In fact you are much more likely to die of a heart attack or a stroke or side-effects of diabetes. 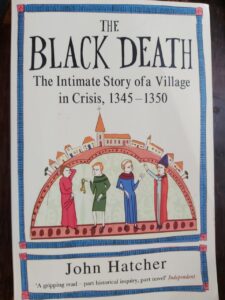 n flu, which caused brief attacks of the heebie-jeebies earlier this century, turned out to have almost no impact, in spite of dire warnings from some health researchers and professionals in the early stages of their respective outbreaks.

This time two things seem pretty certain.  Many of us, probably most of us, will catch Corvid-19 at some point; but very few of us will die of it, almost certainly less than might pass away from a bad influenza epidemic in a rough winter.  But somehow, this viral outbreak has gripped the popular imagination.  And the fascination of what is going on, and what may intrigue future historians the most, is why we have got into such a tizz over something that for thousands of years our ancestors took so stoically, even though they knew that the outcomes were far more likely to be fatal to them.

The obvious answer is the growth this century of social media, our extraordinary ability to collectively cry “Fire!” in our crowded theatre.  News, true and false, spreads almost instantaneously around the world, and much of the time we do not know if it is true or false.  Indeed there are many who urge on the false news if it plays to a political agenda. We no longer have time for thoughtful reflection, to consider courses of action, to weigh up the merits of alternatives.  Not just we the people; our governments, adrift in a violent storm of populism, can only run before the wind.  No politician, no scientific expert, dare take the risk that they might be wrong; the consequences would be too terrible, so the lowest risk – and simplest solution – has to be instantly chosen.  Thus, the world has become locked down, economies face collapse, and all the awful health and welfare consequences that flow from that astonishing policy will haunt us for many years, long after Covid-19 has gone on its way, to be followed by other viruses, other influenzas.

There are deeper reasons for our panic.  We are increasingly used to high drama in public life.  Not only does the media need screaming headlines to sell its products, its consumers have become addicted to over-stimulation and hugely dramatic events – or, if not events, interpretations.   We are all coke junkies when it comes to news and politics.  Everything must be pumped-up until we are high on the false drama.  Tragic individual cases, often awful, playing out on video or written up at great length by journalists told to get “the human angle” provide a meaningless proxy for true analysis of the statistics. 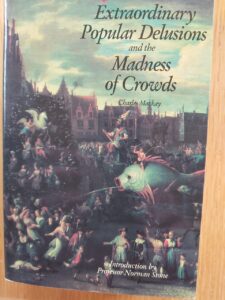 And there is perhaps one yet greater driver of this terrible fear.  We are become frightened , terrified, of death.  Religion no longer consoles most of us that we will pass to celestial peacefulness, that what lies on the other side is joy and eternal serenity.  We want to live for ever, at whatever cost, whatever our quality of life.  In these circumstances, a world sweeping virus induces terror, even if the reality is that very few of us will die from it.

Which leads us to our second reading recommendation: Extraordinary Popular Delusions and The Madness of Crowds, by Charles Mackay, written in 1841. Never was there a better century in which to read it.