VW and The Scholar Gipsy 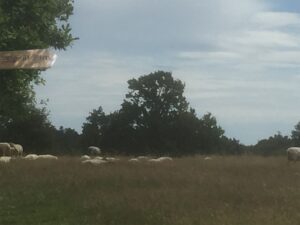 Following my last article about the Signal Elm on Boars Hill near Oxford, there is another unresolved question of story location on Boars Hill.

“Why is it called Boars Hill?” many people ask expectantly.

According to local repute, this is because this extensive wooded area – just a mile or two from Oxford City Centre – is where the last boar to be seen in England perished.  And perished in somewhat extraordinary circumstances.

In the 1600’s (coincidentally about the time when the Scholar Gipsy fled from Oxford academe into the surrounding countryside) an undergraduate was lolling in the woods here studying his Latin text (the stories differ here, in one version it’s Virgil, in another his Latin Grammar) when he is attacked by a wild boar. He is distanced from his sword, his only available weapon his book.  He wrestles the boar and resourcefully (he’s a Queen’s man) chokes it by thrusting said Latin text down the throat of the wild beast.  This is not just a cock and boar story, the event has been celebrated ever since at the annual Boars Feast in Queen’s College.  The college’s story differs only in one detail, their bookish assault happened in Shotover Wood in East Oxford, though Boars Hill residents are resolute in their claims for the name of THEIR wood.  The story is further “corroborated” by a number of gallery paintings of the event, showing the boar with a long narrow speech bubble in Latin emanating from its mouth.  I daresay some versions are Virgil, and others declensions of  irregular nouns.

Of one thing there is NO doubt, etymologists confirm the boar’s utterances are NOT the origin of the term “Pig Latin.”!

And now to VW and Matthew Arnold’s Scholar Gipsy. The VW is not the Wolfsburg motor manufacturer, but Ralph Vaughan-Williams (“VW”) the English composer.

Although born in 1872 to a Church of England vicar who died when Ralph was only three, VW moved from a Christianity instilled in him by his mother, a member of both the Wedgwood and Darwin family, then through atheism to “a kind of cheerful agnosticism”.

But two literary works obsessed VW all his life, Bunyan’s Pilgrims Progress (1678) and Arnold’s Scholar Gipsy.  He read avidly with his mother and first wrote music inspired by a long gestation of Bunyan’s allegorical story, in 1906, when he was 34, and with other intervening attempts, but it was 45 years later that his “opera” (he preferred to call it a “morality”) first appeared.  It is perhaps significant to VW’s eventual spiritual outlook that he changes the name of Bunyan’s main character “Christian” to “Pilgrim”.  This also evokes the theme of “quest”.

There is a similarity with The Scholar Gipsy, which is the other literary work which obsessed VW all his life from an early age.  Both concern a character “wandering” alone, or questing, in search of that something difficult to define but felt spiritually essential to achieve.  Most people seem to interpret this as a quest for “innocent”, unscholarly faith, or a quest for intuitive creative inspiration rather than a workmanlike struggle to create.  But I’m open to other (additional) suggestions.

This is of particular interest to VW personally.  He had wanted to graduate from school (Charterhouse) direct to a London music school but was persuaded by family to go first to Cambridge University where he did at least study music as part of his degree.  But this was most likely an academic approach to creating music rather than an emotional one.  Compare with the Scholar Gipsy who forsakes bookish study to live close to elemental nature, initially with the gipsies.  Is this metaphor for religious faith, or artistic inspiration?  Probably both.  VW did insist on going to the Royal College of Music after obtaining his degree, but confidence was to some extent undermined by constant criticism of his work as workmanlike, serious, but uninspiring.  It was suggested he “correct his opaque orchestration and extreme predilection for modal music”.

VW’s friendship with George Butterworth, an undergraduate composer at Oxford University, was engendered by VW’s admiration for Butterworth’s direct and emotional musical style, for example in his settings of Houseman’s poems collection A Shropshire Lad.  Butterworth’s life was cut short by his youthful volunteering for war in 1914, and an almost immediate death in action, a devastating loss to VW on both a personal and artistic level.

Just as VW is so obsessive about Bunyan’s Pilgrims Progress that he feels unable to write an opera on the subject until 1951 and the age of 79 (there had been many piecemeal attempts, much of which music was abandoned and instead inserted into the very successful 5th Symphony (1943), so also it took VW until the age of 75 (1947/49) to feel able to set his other philosophical obsession, The Scholar Gipsy, into a musical work.  Named An Oxford Elegy, the work is an unusual and innovative mixture of pastoral music, choir, and spoken word, reciting lines from the poem and its associated later piece Thyrsis.  Although some critics say that in attempting this blend VW was always on a probable loser, and that thus the work is not wholly satisfying, others acclaimed the work and it has always had a good public reception, most especially of course in Oxford.

Its first performance was in Oxford, and used a local actor speaking in a strong Oxfordshire accent for the few excerpts from the poems.  This was popular (apparently, in Oxford) but doesn’t seem right to me.  After all it’s one or the other of the two poets voicing the lines in the two poems, mainly the poet Arnold himself, a man educated at Rugby School and an Oxford don.  I don’t think he had the accent of rural Oxfordshire.

Jeremy Irons speaks the lines on an excellent low-price version on Naxos Records (2014),  and the growing popularity of An Oxford Elegy is shown as the time-gaps between new recordings become ever shorter.  There is now a 2018 recording with Simon Callow speaking the vocal lines.  Take your pick as to whether you prefer an older, donnish “Matthew Arnold” speaking the lines (Callow), or a more ‘Brideshead’ voice from Irons (this latter CD, Flowers of the Field, also includes Butterworth’s A Shropshire Lad—Rhapsody for Orchestra).

But in either of the two recordings of An Oxford Elegy it’s the music that does most to capture the elegiac, pastoral beauty of the two poems.

And not a wild boar stirs in the undergrowth.