During the interval at the performance of Swan Lake by the English National Ballet in Bristol last night (very good, by the way), four young women were discussing their beauty regimes as we (inevitably) queued in the ‘Ladies’.   “I had my eyebrows done this morning”, one confided, as she leant over the basins and peered at her reflection in the mirror more closely.  “They’re rather red underneath still and a bit sore.  It was like one of those things where you are like a guinea-pig for trainees to practise on, so it doesn’t cost you anything.  Think mine needed a whole lot more practice, though.”  “Oh my God!” exclaimed her friend also leaning towards the mirror.  “That’s terrible!  Was the wax too hot or something?  It looks as if she’s ripped your skin off!  Seriously you should sue her!”  “Yeah”, agreed one of the others, “that’s negligence”.  As I returned to my seat I found myself reflecting briefly on this attitude, several examples of which have been in the news recently.

On Wednesday I noted that Matthew Hedges, the young academic who had somehow managed to p… off someone important in a major way whilst doing his academic research on security in the UAE, was not only expressing his gratitude to his wife, Daniela, for her tireless campaigning on his behalf during his incarceration, but that the couple had hired a ‘leading international criminal law barrister’ to attempt to overturn Mr Hedges’ conviction for spying and to sue the UAE for unlawful imprisonment.The leading international lawyer is one Rodney Dixon QC who according to Chambers and Partners is a ‘force to be reckoned with’ and has ‘a top mind’.  Whether or not the UK/UAE relationship will be further soured by such a move is not something any of the newspapers who reported on this have seen fit to comment on.  Given the fact that no-one outside the UAE seems to take the accusation and conviction in any way seriously and that Hedges was freed under the terms of a presidential pardon (apparently in response to pleas by his family rather than the intervention of the Foreign Secretary), one would have been inclined to think that Matthew and Daniela might have considered it better to simply get on with life at this juncture, rather than ‘prolong the agony’ by spending a lot of time and money on an international court case.  However, we live in an age where ‘someone must be to blame’ so one can see the reasoning behind the couple’s view that some compensation should perhaps be available for the time lost to them and the fact that in Daniela’s words they have ‘been through hell and back’.

Very much less understandable was the case which got as far as the Supreme Court (at vast expense to which party is yet to be decided – let us hope it is the claimants, not the poor defendant) where this week, Judge Martin Bowdery QC ruled that architect Basia Lejonvarn was not, after all, responsible for the £265,000, which her former friends, Peter and Lynn Burgess, claimed she owed them after she had offered free advice and help on the landscaping of the garden at their £5 million home in Highgate.  The Court of Appeal had last year, in a rather bizarre landmark ruling, found Canadian-born Ms Lejonvarn owed a legal duty of care as a professional architect offering a service, even though this advice had been offered in a ‘non-commercial, informal and social context’.

This latest decision does at least offer some hope to anyone unfortunate enough to have the sort of friends who would consider suing you for free advice and help given in a situation where, firstly they were too mean to pay for a professional, then accepted your offer of free help, then went back to the original professional and decided to sue you for the extra costs they incurred as a result of not knowing what exactly they wanted, who they wanted to do it, nor wanting, in spite of their wealth, to pay for it. Ms Lejonvarn’s barrister, QC Louis Flannery, stated, “This judgement will cause great relief to anyone unfortunate enough to be sued after having volunteered to give gratuitous advice or assistance to friends or acquaintances who might otherwise be unreasonably held accountable for issues beyond the scope of their counsel”.  Well, quite.

Where, however, does that leave all the poor unfortunates, paid professionals, in the NHS for example, who might just, as human beings do, make some sort of mistake?  Well, the answer, as I’m sure you’ve already guessed, is that they’re quite likely to be sued or struck off or both.  Members of the public these days feel entitled to get compensation and/or ‘justice’ for any mistake made by any professional.  A GP friend who attempted to persuade one of her patients with a long-standing cough to have a chest X-ray was turned down by the patient’s wife who ‘allowed’ him only to undergo some lung capacity tests but not the investigation which would have shown up the shadows indicating lung cancer.  My friend was too hard-pressed in her busy surgery to make full notes of all this and is now being sued and threatened with being disciplined by the General Medical Council (GMC).  At a time when as a country we are short of doctors, particularly GPs, she will probably take early retirement and her many years of expertise will be lost to the profession.  Not to worry though, ‘the Public’ will be assured that these matters are taken seriously and they are being protected from ‘incompetence’. 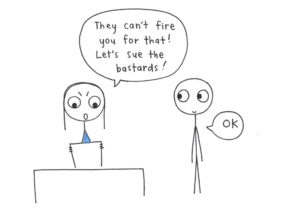 On Tuesday it was reported that a midwife had been struck off nine years after an incident in which it was claimed she was guilty of serious failings in the care of a baby who died just hours after being born.  The mother of the dead child, Rhiannon Davies, is reported to have said “I am pleased with the sanction because it is the only fair one for Kate” (the baby who died).  It is very hard to tell from the limited reporting why it has taken quite so long for the matter to be properly investigated, but is it really fair to the midwife concerned or to a public deprived of her services after years of training?

Medical negligence claims have rocketed in the last few decades as lawyers have been allowed to advertise their services and to operate on a no-win no-fee basis (since 1984 and 1995 respectively).  Type ‘Suing the NHS’ into Google and dozens of law firms will come up claiming their expertise in this area.  The NHS has literally billions set aside to pay for compensation for medical negligence claims.  It costs the NHS over £1.5 billion annually to pay out on these claims.  This money could be used to fund so many more useful aspects of NHS care; more beds, more nurses, hip operations, cancer drugs; the list is endless.  The fear of being sued and/or struck off is also creating an extremely unhealthy climate within the NHS itself.  Nurses, midwifes and doctors at all levels are fearful of making a mistake, any mistake.  They are already aware enough that their mistakes could cost lives – a situation which hardly prevails in most other jobs – but add to that worry the fear that you could be subjected to a lengthy investigation which might lead to your never being allowed to practise again and being sued by relatives seeking ‘justice’ for their loved ones and it is very easy to see why increasing numbers of medical professionals are finding the stress of this environment unconducive to a working life they are prepared to put up with. The BawaGarba case which I wrote about in July is just one illustration of this mind-set.

According to an article in the Guardian in September 2017 by respected journalist, Polly Toynbee, (suggesting people think twice before suing the NHS) there were 10,600 new claims made against the NHS in 2016, double the number a decade earlier.  An acquaintance of mine received a seven-figure sum a few years ago in compensation for the death of her first husband.  She claimed his GP should have spotted the signs of an incipient heart attack when he saw the man several days before he died.  Whether or not he should, whether or not that was a mistake which should have ended the career of a valued GP (he took early retirement as a result of the accusations and court case), should this lady now be managing a portfolio of buy-to-let properties whilst others cannot get the mental health treatment they need or the hip operation they require?

Whether we are talking about publicly-funded services or privately-provided services, a litigious society is not a happy or healthy one in which to live and work.  People make mistakes.  When they do they should be offered/ have to pay for a certain amount of re-training; they should be subjected to a period of supervision; they should apologise; but ‘compensation’ should be a last resort and available only for ‘victims’ who can show absolute need.  Eyebrows (reddened or otherwise) should be raised when people start talking about negligence and compensation – unless it is to open a much-needed debate on all the wider issues around this topic.  Perhaps, as Polly Toynbee says, a Royal Commission may be needed as far as public services are concerned.  As for friends, I wouldn’t wish any like the Burgesses on my worst enemies.