Origins of the Cult of Self-Promotion in Politics 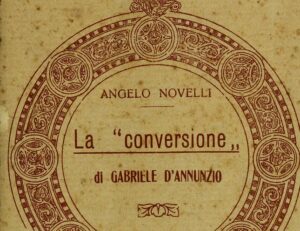 All men dream: but not equally.  Those who dream by night in the dusty recesses of their minds wake in the day to find that it was vanity: but the dreamers of the day are dangerous men, for they may act their dream with open eyes, to make it possible. (T.E. Lawrence)

I once attended a formal dinner in Newcastle, at which Michael Heseltine was the speaker.  Heseltine’s physical appearance, his apparently rigorous logic and presentational style were, at face value, insidiously convincing.  Since, then it has occurred to me how much, albeit from opposite sides of the political spectrum, Heseltine and Wedgy Benn (the elder) are similar, the fire and conviction in their gaze leading you to a conclusion you would never previously have thought you might entertain.

The quote at the head of this article brings to mind the personality of Gabriele D’Annunzio (“A”), surely the supreme example of the second half of its quote.

D’Annunzio, at an unusually young age was an acclaimed poet, playwright, novelist, influential newspaper feature writer, First World War aviator national hero, and soldier of fortune for Italy, twice refusing an invitation to be leader of the Italian people, becoming self-proclaimed leader of the lawless renegade republic of Fiume, and throughout the above being a constantly war-mongering influential public orator and serial arch-seducer of aristocratic women.

Mussolini will model himself on A, assuming his political and philosophical ideas, his oratory style, and his followers.  Once safely in power, Mussolini will refer to A as his “John the Baptist”, a comparison which A, by then in imposed “lockdown” in his extraordinary pleasure palace on Lake Garda, deeply resents.  A resents the implication that he is just the prophet of Mussolini, the man who will usurp his ideas and public image.

Even the name he was born with (1863) prefigures the personality of this extraordinary man.  Gabriele D’Annunzio.  L’Annunzio is the Annunciation (the Virgin Mary receives the message that she will bear the Son of God), delivered to Mary by God’s messenger, the archangel…….Gabriel. The included prefix “d” itself implies nobility in Italian as in French.

When A moves to Rome University at the age of 18, he gets work writing society features for newspapers, with more of an eye to sensational effect than truth.  He will soon be recognised by his contemporaries as a great poet, capable even of standing with Virgil and Petrarch.  Despite being banned by the Pope, A’s novels and plays are popular too; the poetic language is rich but direct, the subject matter is decadent, viscerally detailed, “voluptuous.  He is threatened with bankruptcy by his extravagant spending, but saved by the huge success in French translation of a new novel”.

This society background together with his angelic looks and intense blue eyes give him access to the society ladies of the time, where he is much admired.  He is already enjoying a lifelong stream of casual or short-term lovers, many of them aristocratic titled married ladies.  A is short in stature and prefers statuesque sexual partners; where the objects of his desires are not tall, he has high-heeled shoes shoes made and shipped from London for them.  He is meticulous and extravagant in the preparation of rooms for his lovemaking, they are often filled with rose petals, immaculately furnished with damask hangings, and he experiments with different custom-made perfumes to suit the atmosphere.

Despite this acute sensibility, A is a war-monger. He admires war for its own sake, the devotion to duty, the gore and the human sacrifice. He is the prophet of war in every sense.  I am reminded of Ludendorff, the German WW1 general, who glorified war in the Spartan sense, believing that defeat in war is valid only when every soldier on the losing side has been killed.  Just as many of A’s ideas are taken up by a less sensitive Mussolini, Ludendorff, the instigator of the idea that WW1 had not been decisively lost, is “the man who made Hitler possible”.

Now WW1 has begun and A is fascinated by the ultimate war machine, the fighter plane.  He is already a practised flyer when in 1914 he returns from celebrations of his literary success in a Paris already at war.  A has whipped up war enthusiasm in many public speeches for some time, and his pressure on the reluctant Italian government is now stepped up. Italy has to partake in any war to be respected in Europe.  It is almost irrelevant which side Italy would take, though it seems clear that the Austrian empire is the traditional enemy.  My “O” level history master likened this to “a football match where Italy is a spectator on the sidelines cheering both sides on, joining the game only at half-time when it is clear who is going to win”.  Italy joins the war so as to exact territorial gains from a defeated Austria.

A’s wartime “publicity?” exploits, for example leading his squad of 9 WW1 fighter planes on a 700 mile round trip over enemy territory to drop propaganda leaflets on Vienna, enhance his reputation.  When not in the air, he turns up to lead Italian battalions on land.

Italy is largely ignored as a beneficiary of the carve-up of Europe at the Treaty of Versailles.  Angered by the reluctance of the conference to assign any nationality to the town of Fiume on the Italy/Croatia border, which has a significant Italian minority, and by the inertia of the Italian government, A (now aged 56) sets off from Trieste in a cavalcade headed by him in a huge red limousine filled with flowers, followed by 186 mutineers, to take Fiume by force “for Italy”.  (This after a necromantic ceremony with his current mistress in a Venice cemetery).

The Allies send an army to block his route, but A bears his chest Napoleonically to their rifles; the (largely Italian) contingent mutiny and join A’s cohort with their transport and equipment.  He now has 2000 troops by his side and is welcomed into the town by the Italian population, including ladies in evening dress sporting machine guns.

The triumphant A declares himself Duce of the free state of Fiume, commences a daily programme of morning poetry-reading and manifestoes to adoring crowds from his balcony, accompanied by proto-military demonstrations of street power.  A demonstration of the political power of performance, of an act of bravura.

He sectionalises the admin of the state in a way that will be copied by both Hitler and Mussolini (both of whom A despised, publicly dismissing Mussolini  as “a coward—even Lapland would have overthrown that man”).  A takes up the symbol of the Fasces, the ancient Roman axe bundled in reeds carried by Roman dignitaries.  But he consistently declares throughout his life that he is not a Fascist.  The political language, symbols and badges, black shirt uniforms, showmanship, use of modern effects for propaganda, the rhetoric of Fiume are all role-models for what will eventually be taken up by Mussolini and Hitler, ushering in a new era of showman politics across Europe.

The state which A rules is very much in line with his tastes, a lawless, wild-west town, a 20th century Sodom and Gomorrah of alcohol and drug abuse, cheap prostitution and militaristic gang warfare.  It is a huge embarrassment to the Italian State, and A repeatedly refuses to turn over Fiume to the “weak” Italian government.

The Duce of Fiume reigns over his fiefdom for almost two years – is forced to move out at Christmas 1920.  After so many fruitless appeals to A by the Italian Government to hand over Fiume to them, they finally turn over much of the disputed Dalmatian lands to the new Yugoslavia, and advance an Army backed with naval support to oust G and retake Fiume.  Despite his calls to fight for Fiume to the death, most of his legionnaires leave on packed trains, and A leaves Fiume to start to build a personal pleasure palazzo on Lake Garda.

Now 58, he will spend the rest of his 17 years of life developing “Vittoriale” as a  vast home/museum of himself.  The Fascists, suspicious of Mussolini as a potential leader, invite A as leader, but for the second time in his life he hesitates when offered an official position which would lead to leadership of his country.  When Mussolini comes to power, A is granted every boon.  20 flatbed railway trucks bring a battleship to the bottom of Lake Garda, where it is re-assembled and sailed up the lake and inserted into the mountain in Vittoriale with its prow emerging.  A reviews and drills its crew regularly.  A’s warplane is also delivered to the museum.  Mussolini refuses A only one thing, a private airstrip, (at Garda A has chosen a home close to the Austrian and German borders).  He is denied permission to make public pronouncements.  He is in lockdown.  Soon there will be an incident where A “falls” out of a bedroom window.  He survives and the matter is hushed up.  A survives at this, his living mausoleum until his death from a brain haemorrhage in 1938.  A petition to Mussolini for funds to start building a “Museum of War” in Vittoriale still lies on the Duce’s desk.

In 1933 Mussolini has written and installed a new Italian constitution.  It is the same constitution as that established in 1919 in Fiume.  Written and implemented by perhaps the greatest open-eyed realiser of his dreams of all time, and the first performance-based self-promoting power politician of the modern era, Gabriele D’Annunzio.