In a vaguely amusing piece entitled ‘Guiltless Food… is it possible?’  in last week’s Countryman’s Weekly by contributor Ryan Lynch, he related a pub conversation prompted by his dog, a Chesapeake Bay Retriever, bred for retrieving ducks.  The ‘young lady’ interrogating him about the dog turned out to be vegetarian and seriously lacking in any understanding about the origins of food.  ‘Why’ she asked him, ‘do you have to shoot ducks?  Can’t you just buy them like other folk?’  A similar lack of understanding seemed to permeate the debate last week over the withdrawal by Natural England of general licences for the control of certain bird species.

According to the Gov.Uk website, Natural England is ‘the Government’s advisor for the natural environment in England, helping to protect England’s nature and landscapes for people to enjoy and for the services they provide’.  It is ‘an executive non-departmental public body, sponsored by the Department for Environment, Food and Rural Affairs’.  On 23rd April this executive body caused a massive stir amongst rural and farming communities by withdrawing, effectively without notice, the general licence ‘to kill or take certain birds to preserve public health or public safety’.  These general licences permitted the killing of 15 species of ‘pest’ birds, including magpies, jays, crows and pigeons, the killing of which would otherwise have been an offence under the Wildlife and Countryside Act 1981.  The reason for the withdrawal of these general licences was a legal ruling on the back of a case brought by Wild Justice, an organisation set up by the wildlife TV presenter, Chris Packham.

Chris Packham CBE, naturalist, wildlife photographer and television presenter is known to many as the former presenter of CBBC’s Really Wild Show and current presenter of Spring Watch.  He is an active environmental campaigner, part of the anti-hunting lobby and also anti much of the current countryside management.  He became a vegetarian in 2005 and vegan in 2016.  He set up Wild Justice (‘because the wild needs justice…’) in February this year with Dr Mark Avery and Dr Ruth Tingay.

Wild Justice had contended that Natural England should have satisfied itself, before issuing general licences, that no alternative, non-lethal, methods, such as scaring, could provide a satisfactory solution.  Natural England accepted that the current licences were unlawful and agreed to put in place new licences in compliance with the law.  However, the withdrawal of the existing general licences was made with only three days’ notice at a crucial time of year.  Amidst jubilation (no more shooting of birds by nasty people who like killing things) from those who do not really understand the way farming and rural communities work, there were immediate concerns from others who understood the implications rather better and who were seriously worried by the timing of the announcement.

Landowners and others who have been striving to increase the populations of birds on the red list were dismayed.  The corvid family, appealing as they are for their intelligence, have almost no predators apart from man in this country.  As a result the numbers of crows, jackdaws and magpies can get out of hand.  All these birds, given the chance, prey on the chicks and eggs of some of our rarer songbirds such as yellowhammers, corn buntings and skylarks, not to mention linnets, lapwings and curlews.  (In 2011, when an experimental cull of magpies and crows was carried out, it was estimated that there had been a 98% increase in magpie populations in the previous 30 years).  Both crows and magpies are also known in certain situations to attack newborn lambs and peck out their eyes.  Pigeons eat young crops (woodpigeons which are shot can of course also be sold in game shops).  Clearly, if humans are to eat, whether that be meat or vegetables, predators need controlling – which does include shooting (actually a quick death compared to some suffered by animals we eat).

The discussions and debate have rumbled on all week.  Many have argued, not unreasonably, that the decline of songbirds is as much due to intensive farming as the increase of predators.  However, those affected by crows, magpies and pigeons would, it seemed, either have to wait until new general licences are released or apply for individual licences, the online provisions for which seemed to be seriously deficient.  Groups such as The Countryside Alliance, the National Farmers Union (NFU), the British Association of Shooting and Conservation (BASC) have all written to the Environment Secretary, Michael Gove, asking him to step in.  Former environment secretary Owen Patterson has also contacted Mr Gove on Twitter asking him to hold Natural England to account for its ‘ignorant decision and the damage it has caused’.

Tony Juniper, appointed chairman of Natural England the day the withdrawal of licences was announced, is known to have a long association with Mark Avery and although the ‘shambles’ cannot be laid at his door, questions are being asked about the relationships.  Lord Blencathra, the Deputy Chair of Natural England, has robustly defended Mr Juniper and stated in a letter to the editors of The Telegraph and The Mail that “My priority now, along with all in Natural England, is to put back legally robust ways to allow landowners to continue to control wild birds where necessary.  This is not a ban on control but a change to the licensing system – and the first steps are in place.”  The latest decision seems to be that ‘Certain species of birds which are seriously damaging crops and livestock can be killed before an updated general licence is granted if urgent action is needed’, according to the ENDS report.

So why exactly has this ‘spat’ come about?  It seems that Chris Packham took exception to what he calls ‘willful killing’ five years ago when walking in his local wood he encountered a man with a shotgun.  “He said he was shooting vermin – crows, magpies and squirrels – but this man didn’t live in this wood, so those animals were not vermin to him or exacting any negative impact on his life.  This was just willful killing.”  He may well be right, and it is also true that Wild Justice did not ask for the immediate withdrawal of the licences, merely that they should not be renewed next year.  Poor management at Natural England and no Plan B (seem familiar?) seem to be the biggest culprits here. 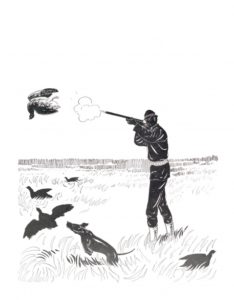 As in all such matters a balance needs to be struck between sensible conservation and environmental protection and the continued necessity of maintaining some sort of equilibrium in a world where, quite clearly, Man’s interference has already changed so much.  Tony Duckett, conservation officer for the royal parks, pointed out during the week that cats pose a bigger threat to birds than firearms – a point with which Mr Packham would no doubt agree as he has made the case against cats himself in the past.  The legal ruling against Natural England was badly timed and probably an unnecessary action taken to prevent a very small number of gun owners from acting outside the spirit of the existing licensing arrangements.  It does seem somewhat surprising that a man who in an interview with The Guardian a few years ago prided himself on the fact that he based his arguments on ‘good sound fact’ could have so overlooked the damage the licence revocation in the middle of the breeding season would do to innumerable other species of bird.  In the overall scheme of things, however, this does look rather like mismanagement and ruffled feathers all round rather than a serious long term environmental and conservation issue.