As a golfer, PING to me is a premium brand of golf clubs.  The name derives from the satisfying sound that is made when the club hits the ball in its sweet spot.  But an altogether less satisfying sound has been heard in recent weeks, as users of the COVID-19 app are pinged with the information that a close contact has tested positive for COVID-19 and they are thus advised to self-isolate for up to 10 days.  In the week ending 7th July, just over 520,000 such pings were received; from media reports this volume was causing considerable problems for some employers, not least as close contacts of a positive case may well represent many members of the same workforce.

The number of pings is bound to increase as the number of positive tests goes up and the recent steep rise in positive tests has undoubtedly fuelled the increase over recent weeks.  NHS Test and Trace has been publishing data on the number of pings each week since September last year, when the app was fully launched.  I don’t recall seeing any data about numbers of pings in the press prior to the large number last week, so I though it would be worth looking at the overall time series. 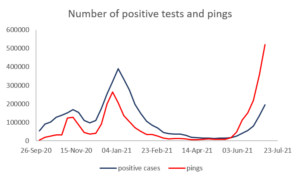 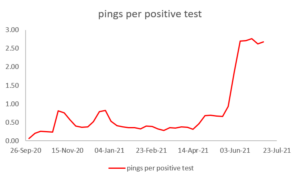 Normally if I saw data like this, it would generate two thoughts:

However, there is nothing on the Government coronavirus website to suggest that there has been any change in definition nor any evidence of any error in data.

The only hypothesis I can venture is that the current wave is disproportionately affecting younger people, who are much more likely to be tech savvy and perhaps a higher proportion installed the app.  But a poll by Savanta ComRes dispels that assumption:

“People aged 55 or over are the most likely group to currently have the app, with 49 per cent, but are also most likely to have never installed it or don’t own a smartphone, on 41 per cent.

Among the 35 to 54-year-old age group, 42 per cent currently have the app, 19 per cent used to have it but have since deleted, while 30 per cent have never downloaded it or do not have a smartphone.

For the 18 to 34-year-old age group, 34 per cent currently have the app, the same proportion used to have it but have deleted it, while 21 per cent either never downloaded it or do not have a smartphone.”

If  its not installation of the app by younger people driving the pingdemic, perhaps it is increasing usage in recent weeks.  Data from NHS Test & Trace supports this view, the chart below showing the number of venue alerts each week (this is the number of different venues where a visitor has reported a positive test result). 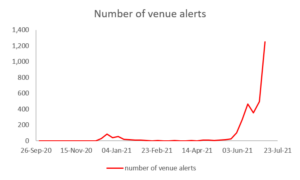 The number of venue alerts started to take off in early June and has increased sharply since then.  The hypothesis is therefore that since restrictions were lifted on 17th May, people have been going out more to bars, restaurants, football matches and other events.  The people going to these events will have a skew towards younger people who we know have higher levels of infection.  This leads to more venue alerts and the nature of the venues means that each alert leads to high numbers of individuals being pinged.  In coming weeks, we are likely to see the app disabled (indeed the Savanta ComRes data referred to above confirms disabling is higher among younger people) and the requirement to check in at an event or establishment is no longer mandatory.  All this is likely to lead to less pings from August onwards. 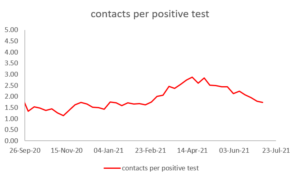 This line is much flatter, increasing when the number of positive tests was low in April and May this year and actually showing a downward trend in the past few weeks.  The contacts covered here are primarily those manually made by local public health teams and by the national contact centre and so the recent downward trend might be compensating a little for the sharp rise in contacts made by the NHS app.

But as we have indicated, these levels are unlikely to be reached, as consumers delete or pause the app or switch off Bluetooth in large numbers, to avoid having to self-isolate.  However, this could be counter-productive; receiving a ping on the app advises self-isolation for the stated number of days, but receiving a call from NHS Test & Trace legally enforces self-isolation.  Government ministers have got themselves into a tangle on this with Paul Scully, a business minister, saying on Tuesday morning it was “up to individuals and employers” to decide what to do when pinged by the app.  But No.10 refuted this a couple of hours later, saying that “isolation remains the most important action people can take to stop the spread of the virus”.

Many of those forced to self-isolate will be double-vaccinated, a situation that will not be amended until 16th August, when such individuals may be able to take daily tests rather than self-isolate.  In the meantime, even with many deleting or pausing use of the app, millions are likely to be pushed into self-isolation in the next few weeks, with obvious and consequent impacts on the ability of businesses, just emerging from the lockdown, to provide a service to their customers.  To pick up on another sporting analogy, this issue is likely to ping pong around for a while yet.

This article is one of a series, the previous article showing jabs work is here.