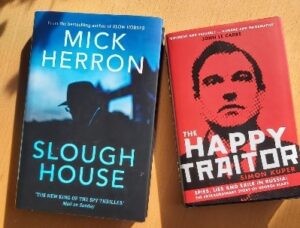 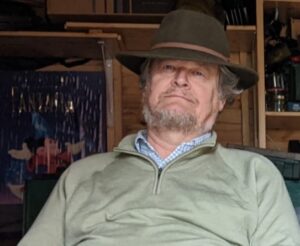 What a wonderful winter it has been for spying.  At least, for books about spying, a genre to delight readers and publishers alike.  And bookshops, who apparently are having their best trading times since 2012.  Let us hope that lasts, and even grows, so that as the shackles fall away and we emerge blinking and trembling from our caves, we can once more head for a leisurely perusal of the shelves of our local bookseller.  And, maybe, even hope for the revival of the second hand bookshop.  After all, every on-line vendor of dog-eared paperbacks and ex-library marked classics and slightly foxed hardbacks has to store their teetering heaps of decaying stock somewhere, so with landlords desperate for shop tenants, and rents plummeting, surely that store of treasures could be on the high street, or at least in a nearby side street?

But see, already we have fallen to one of the tricks of the skilled secret agent; we have been diverted from what we were pursuing.  Back to spying, to two especially good new books on the subject.  The first is fiction (at least those who care about national security must profoundly hope it is fictional).  Mick Herron has appeared in this column before, lauded for his Slough House series of novels, and as one of the best fiction writers working today.  Mr Herron is now touted as a second John Le Carre, spy writer extraordinaire, the great man himself having slipped quietly out of the party late last year.  That does not properly praise either of them; Le Carre used spies and the secret intelligence world as a hook on which to hang his increasingly angry analysis of late twentieth century society and the weaknesses of the human condition.  Mr Herron is a satirist, a very polished and witty one, setting his novels in a backwater of a fictionalised (and once again, one really hopes it is fictional), security service.   His latest, just out in hardback, is called Slough House and features a blond bouffant politician of low morals, a sinister bunch of civil servants, the Slough House team of misfits, a plot involving a Russian President with a keep-fit mania, and office politics which ring so uncomfortably true.

The other book is non-fiction, but also alarming.  It is by Simon Kuper, and is called The Happy Traitor, a history of George Blake, the super-mole unmasked in 1961.  The choice of title is interesting.  Blake was not Brit, but Dutch, with roots in the Near East (his father was Jewish of Egyptian nationality), without any British blood.  So the book has sparked an interesting though rather pointless debate about whether Blake could be a traitor to a country with which he had no blood connection.  He himself said: “To betray, you first have to belong. I never belonged.” But as he served the British Navy, and its Civil Service in the shape of MI6, the semantics seem a little unimportant.  Undoubtedly he seems to have been a happy man throughout most of his life, certain he was doing what was right, and especially after he fled to Moscow from Wormwood Scrubs in 1966.  In this he was very different to Kim Philby, promiscuous heavy drinking public school product, or Donald Maclean, promiscuous heavy drinking public school product, or Guy Burgess, promiscuous… well, we don’t need to labour the point.  They all were driven by very complex neuroses about parentage and guilt and belonging and were not happy men.  Blake probably did more damage to British security than any of them, with whom he had no known connection; indeed, his betrayals only began after Burgess and Maclean had left for Moscow in 1951.

Blake seems to have had no political leanings in the early part of his life.  He was a member of the Dutch resistance after the Nazi invasion of the Netherlands, but escaped to the UK in 1943, aged 20.  He joined the Navy, and was then recruited into MI6, not least because of his very considerable language skills.  In 1948 he was sent to South Korea where trouble was brewing, and where Blake’s section monitored what was going on in the communist North.  In 1950 war broke out between North and South and in 1951 Blake and his colleagues were captured by the North Korean forces and imprisoned.  In jail he read much Marxist literature, was converted to the communist cause, and volunteered to spy for the Soviet Union.  He was released in 1953 and returned to the UK (to a cheering crowd welcoming him).  He went to work in MI6’s Eastern Europe section, based in Berlin, and for seven years fed to the Soviets every secret that crossed his desk, resulting in the deaths of many agents and contacts and the devastation of Britain’s agent networks (and parts of those of the USA) across Europe. In 1961 he was in turn betrayed by a Polish double agent, tried, and sent to jail for 42 years.

In Wormwood Scrubs he met three sympathisers – Sean Bourke, Michael Randle, and Pat Pottle, who were of strong anti-establishment leanings and took a liking to Blake (he was by all accounts a likable fellow and good companion).  In 1966 they enabled his escape from Wormwood Scrubs and delivered him to a rendezvous in East Germany.  From there he went to Russia, had a second family, and lived off a KGB pension until he died last December, a week after Le Carre.

The involvement of Bourke, Randle, and Pottle was not discovered until 1989 when they confessed.  Bourke could not be prosecuted as he was an Irish citizen; Randle and Pottle were sent to trial in 1991 but acquitted by a sympathetic jury.  (The Editor will become alarmed that this column is becoming a series of personal reminiscences but this one is irresistible.  In 1991 I was in the process of buying a house in North London, from a Mr and Mrs Pottle.  The house was full of the trophies and photographs of Mrs Pottle’s father, Harold Abrahams the distinguished Olympian, which I duly admired.  Mr Pottle was a charming if somewhat distracted man who needed to complete the sale very quickly, a timetable I could not meet because, maybe appropriately, the house had bad foundations and needed underpinning.  I withdrew; three weeks later the trial was announced and I realised who Mr Pottle was.)

Blake has never captured the public imagination in the way that Burgess and Maclean and particularly Philby did.  Somehow, they have an air of romance about them, amusing if very naughty boys behaving badly, while Blake has always seemed dull and workman-like in his betrayals.  Although an avowed Marxist, with an almost religious fervency to his beliefs – he indeed said that Communism was a route to God, and one suspects that with a good Catholic education he might have ended up as a priest rather than a spy – he treated his espionage as a job, and one to do well.  Because of that, he was much more successful  than Burgess and Maclean whose behaviours became so bizarre they were already under deep suspicion when they fled.

Which thoughts are more than a trifle concerning.  We have had very few recent spy scandals.  Yet it is impossible that political and technical snooping cannot be widespread in this complex, competitive, and increasingly tense world.  Are the spies not being spotted because they are, like Blake, only too dedicated to quietly proficient advancement of their skills?  That is a very worrying thought.