Hamilton, a musical by Lin-Manuel Miranda. 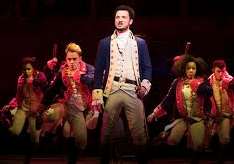 Who remembers the right-hand man?  That most of us had never heard of Alexander Hamilton (despite his face being on the $10 note) before the huge success of Lin-Manuel Miranda’s hip-hop musical is quite remarkable.  Quite apart from his pivotal role at Washington’s side in the American Revolution, followed by his work on the US constitution, he was the first Treasury Secretary and established a national bank.  The reasons for his historic airbrushing may be down to the politics of the day or elements of his life – an affair was very publicly exposed – but, based on Ron Chernow’s biography, Hamilton does much to redress the balance.  Taking us from his start as an orphaned, illegitimate immigrant (he was born on the island of Nevis) we see and hear Hamilton’s progress through his anarchic student days, through his courtship of the high society Schuyler sisters, to his involvement in the Revolution and the early days of independence.  Such a story of disenfranchisement and rebellion is one that is a perfect fit for hip-hop performed by a mostly black cast and the use of rap fits extremely well in battles of power and politics.

The show features 38 songs that so crackle with pithy lyrics we are hard pressed to keep up and, despite the mix of rap and melody, each number is distinctive and memorable.  For lovers of West End musicals worried that this will not be for them – think again.  While the essence of the show is hip-hop, it roots are firmly in the traditional genre.  The relationship between Burr and Hamilton has elements of Salieri and Mozart from Amadeus, and the Schuyler sisters might have been lifted from Dreamgirls.  The reappearance of refrains has similarities with Les Miserables and, while this is not Gilbert and Sullivan, Washington does describe himself as a “model of a modern Major General”.  The weighty subject matter is lifted significantly by the wit that a hip-hop delivery facilitates so well. Elements of darkly camp comedy come with interventions in the narrative from George III – the song “You’ll be back” features the deliciously nasty lyric: “when push comes to shove, I will kill your friends and family to remind you of my love”.  “The Room Where it Happens” highlights the machinations of politics behind closed doors with inventive choreography, as does the ultimately tragic “Ten Duel Commandments”.

Gauche and unconfident at first, but then highly driven and single-mindedly ambitious, Alexander Hamilton is not a sympathetic character.  However, Jamael Westman’s portrayal is never less than compelling and is well balanced by the other revolutionaries.  Washington is a strong mentor and mediator, while Jefferson and Madison are scheming and power driven.  As ever, the devils get the best lines.  In politics no one remembers who comes second, but Giles Terera’s Aaron Burr, a man perpetually undermined by Hamilton (ultimately losing an election to Jefferson because of his intervention), leaves us remembering his part in this history both because of his performance and role as Hamilton’s ultimate nemesis.

This is not an easy ticket to get, but the effort is well rewarded.  Believe the hip-hop hype.  While this may not be a totally groundbreaking musical the approach is refreshing, original, energetic and most importantly supremely entertaining.