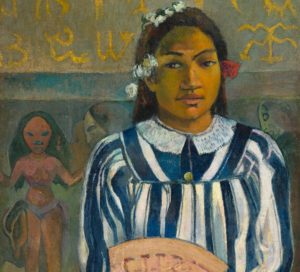 Paul Gauguin (1848-1903) got around a bit and was up himself in a big way.  However, the same is true of a lot of great artists.  Surprisingly, given his raffish behaviour towards the end of his days, he led a conventional and prosperous middle- class life in Paris for 11 years, working as a stockbroker.  He had a Danish wife and five children.  During this period, he painted as a hobby, collected art and was in touch with artists such as Camille Pissarro and Paul Cézanne.  This comfortable life came to an end when the stock market crashed in 1882.  Gauguin gradually abandoned his family and took up painting full-time.  In search of the simple life, he spent time in an artists’ colony in Brittany and worked with Van Gogh in Arles (a short-lived and unsuccessful venture).  Still in pursuit of the native savage (with which he identified), he made several visits to Tahiti and eventually settled on one of the Marquesas Islands where he died at the age of 54, his work on the whole  unappreciated.

The Exhibition is, of course, of Gauguin’s portraits and includes a number of himself.  He had no hesitation about portraying himself as Jesus.  In Christ in the Garden of Olives, he reclines while shadowy sinister figures lurk in the background.  In Self Portrait with Yellow Christ, he stands between reproductions of two of his own works.  In many of the self-portraits, he is shown looking sideways with a very cold eye as if he did not much care for what he saw.  Also, in the Exhibition are a conventional portrait of his wife and less conventional ones of two of his children.

Gauguin clearly thought hard about the impact of his work.  He wanted to give more than a visual experience.  One striking way he achieves this is by including in the portraits disparate objects.  In Young Breton Woman, the daughter of a countess is shown as a charming and innocent looking girl.  However, beside her is a primitive style sculpture by Gauguin of a woman with menstrual blood on her.  The portrait of his Tahitian wife, The Ancestors of Tehamana, shows her wearing a smart Mother Hubbard dress against a background of floating heads and other things recalling Polynesia’s pagan past.  In another painting, Woman with a Mango, again she is dressed in an all-enveloping Mother Hubbard and holding the mango out (ripe fruit?  it was bought by Degas – a life-long supporter).  Gauguin married her when she was 14 and the Exhibition booklet tartly says her experience of the relationship is not recorded.

Clovis Asleep depicts his son with his head on a table next to an enormous tankard.  Empty vessels waiting to be filled? His old but dead friend, Meijer de Haan appears in one of Gauguin’s last paintings, Barbarian Tales, dressed as a priest but with some devilish features beside two beautiful women representing Polynesian religions.  Gauguin detested the deadening effect French colonialism had on the lives of the natives.  An interesting exhibit is Père Paillard, a sculpture of a man with Devil’s horns representing a French priest who rebuked Gauguin for his affairs with local girls while sleeping with his own maids.

The Exhibition includes several paintings, described as ‘surrogate portraits’, which are taken to refer to people in Gauguin’s life.  One of these, Still Life with’ Hope’, is of a vase of wilting sunflowers against a background of a Degas print and a painting, with the title ‘Hope’, by De Chavannes , which Gauguin owned.  It is seen as a tribute to Van Gogh, who had died 10 years before the picture was painted.  Although their collaboration ended badly, they had remained in touch after Arles.

One of Gauguin’s greatest talents was his ability to use bold colours and sympathetically even when unnatural and the Exhibition contains some fine examples of this.  His Jesus in Christ in the Garden of Olives has bright red hair illuminating his face.  In the cheerful Bonjour, Monsieur Gauguin the countryside is painted in strong but unusual colours under a  dark blue  sky.  The subject in Young Christian Girl wears a striking yellow dress and stands against a country background totally recognisable but painted in unnatural colours.  In Woman with a Mango, Tehamana’s vivid purple dress is contrasted with the red of the mango and a strong orange background.

An Exhibition wider ranging than its title suggests and definitely worth seeing.