The other day I received a surprise email from some old friends with whom I have not communicated for a few years.  They wanted to know if I would be happy for them to give my email address to a friend of theirs whom they had just discovered I had known many years ago.  I was, as one often is in such situations, curious.  I said ‘yes’, of course, and it set me to thinking about the nature of friendship.  In recent weeks I seem to have read a number of articles about the difficulty of conducting friendships under Covid restrictions, but if they are true friendships, they do not depend on geographical proximity or constant and frequent presence, do they?  Those things may be necessary for acquaintanceships, but not for friendships, surely?

My best friend at my first school was called Susan.  At 11 we moved on to different schools and I really didn’t see her much again until years later in our early thirties we met up by chance on the Tube in South London.  I recognised her.  She did not initially recognise me. We both had young children and our friendship was rekindled for a few years until my little family moved out of London to Hampshire and distance made maintaining contact more difficult.  We kept up communication for a while then, by common accord, let it slide.  In reality we had little in common but our childhood growing up and our mutual focus on our own growing children.  I do not miss her now and I am equally sure she does not miss me, but our friendship in both those periods of our lives provided something of value to both of us.  Many people maintain childhood friendships throughout their lives and these friendships remain hugely important.  Those friends are the ones who know where you come from; what your parents were like; how you got on with your siblings; what your home was like.

For those who want to reinvent themselves as they grow up, the first thing they will need to do is to drop their old friends.  They are too reminiscent of their old life.  In C.P. Snow’s series Strangers and Brothers, his character Lewis Elliot moves away from his rather circumscribed provincial origins in Leicestershire to seek success as a barrister, an academic and a civil servant.  Throughout this process he cultivates new friends and detaches himself from the old.  He knows he is doing this and doesn’t much like himself for doing so, but it is a necessary part of his life progression.  In his case his upward mobility is hard-won and in the period depicted in the novels, the early to mid 20th C, that mobility was perhaps harder than it is now.  Towards the end of the 20thC it also worked in reverse.  A friend who worked for the BBC took great pains to hide the fact that he was an old Etonian.  Those origins were not ones to be proud of.  They were not respected in the culture in which he had chosen to work.

So how do we choose our friends?  Do we choose them because they think like us; or because they are on a similar trajectory to us; or because we enjoy the same activities, whether those be drinking, playing sport or something more esoteric like re-enactment?  The answer almost certainly is none of those things and all of those things.  You can enjoy say, playing a game of tennis with people, but they may never classify you as a friend, you are simply a tennis buddy; you can find yourself pursuing the same career as others, but feel you have little in common; you can be in the same environment but not find that spark of friendship.  Friendship, like love, does require a spark; a spark of recognition; a spark of mutual appreciation.

That spark may not last.  It may, like love, only last for a certain time.  Sometimes it can be rekindled.  It is really rather interesting how, when universities or schools or members of those organisations set up reunions, the earlier ones are often poorly attended, or attended perhaps by those whose lives are not fulfilled or not going as they had intended.  Those who are busy with careers, families and new friends as well as old, have no need and no time to revisit old haunts.  Later, when life has been more lived, has perhaps ceased to be so hectic and retirement beckons, a curiosity sets in, for some at least.  ‘I wonder how old So-and-So did’.  ‘It might be interesting to see whether fame went to Whatisname’s head’.  50-year reunions often attract more attendees that 10-year reunions (provided too many haven’t died, of course).  Time is more available and the dice have been cast.  Some goals have been achieved and some haven’t.  These reunions can be a fascinating coda to a life.  It is even possible that after all these years, the reasons for those initial friendships remain and contact is renewed, sometimes in spite of distance.

Does modern communication make friendships easier?  Probably not.  It certainly makes acquaintanceships easier.  How many ‘friends’ do you have on Facebook?  Ten, twenty, fifty or five hundred?  Are your real friends even on Facebook at all?  If the majority of your friends were to ‘defriend’ (since when did that even become a word?) you overnight, would your life really suffer or change?  These hundreds of people, when it comes down to it, are simply some of the people you have met or come across in the course of your life.  You may perhaps wish some of them really were friends.  Others you may have difficulty remembering how, where or when you last met them.  You may drink regularly with them simply because they are part of a group with whom you have become associated.  Should you relocate to the other end of the country they would probably not give you much further thought.  Those few you would still keep in touch with are your friends.  In the old days you would have written them letters. 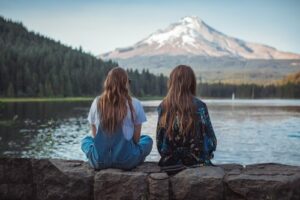 Has Covid really affected or diminished your friendships?  I suspect not.  The fact that you cannot nip round for a glass of wine of an evening, meet at the pub, go on a shopping trip or on holiday together will almost certainly make little difference to your real friends, even those to whom you have barely spoken over the last year.  They will happily pick up the threads of friendship wherever they were left off – in the same way as they would if you had returned from living and working abroad after thirty years.  Children’s timescales will of course be different, but they too will pick up their friendships where they left off, unless the spark has died, in which case they will make new friends to go forward with in their new post-Covid world.  ‘True friendship’, as the writer Isabel Allende said very simply, ‘resists time, distance and silence’.