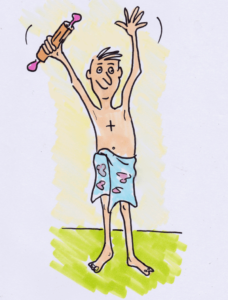 If you have ever read Sir Henry Rider Haggard’s adventure story Nada the Lily, you will recall that Chaka, the brutal Zulu King, liked people to address him in the third person as “The heavens above”.  When I read the book at about the age of 15 (and for those looking for a really good birthday present for someone of that age, there is hardly a better) I was greatly taken by the phrase and from time to time have tried it out in front of the mirror, bath-towel round waist, Zulu warrior style, a rolling pin taking the place of the knobkerry in the right hand.

Alas, it is just a dream.  In this duller century I will never hear those words addressed to me for real or hear the royal salute of “bayete” roar from a thousand warrior throats when I lift my hand.  The nearest I will get to being “the heavens above” is as a tourist class passenger in an international flight and, by an extraordinary coincidence, that may be just what I will be when you are reading this.

Although the flight back from New Zealand to Britain is a long one (some 22 hours in the air plus a short stopover in Singapore for the aeroplane to get its breath back), it is much shorter than it used to be.  Cheaper and more popular too, it being quite noticeable how many more people travel to and fro than used to be the case.  But it is still a long way in seasonal terms as you exchange the quickly cooling tail of a hot New Zealand summer for what I hope will be an unfolding English spring.  As the colour fades from the Southern landscapes the magnolias should be blooming in London.  It is time to return home.

There will be pangs of regret, of course.  The bluff oyster season has just begun but the British natives, from Colchester and Whitstable, have only a few weeks left to run.  Then, alas, the “R” disappears from the month and it is rock oysters only until September.  Not that I have anything against rock oysters, of course.  Some of them are very pleasant chaps.  It is just that I would rather not eat them.  Somehow oysters do not taste right in the summer months anyway.

The other thing I will miss is the ubiquitous New Zealand screw-top wine bottle.  Sometime ago New Zealand had a problem with a lot of wine arriving corked at an exhibition, and the wine industry invested wholesale in screw-top technology.  Obviously it is poo-pooed in France – but then it would be, wouldn’t it? – and it is an interesting question which is the better system.  Hard to say in flavour terms (it would take a discerning palate to tell which part of the flavour is the grapes and which part the stoppering) although it does mean you cannot sniff the cork and say “ah” when you open the bottle.  It is difficult to sniff a screw-top without looking rather an ass.

The odd thing about travelling back at the end of the week is that I will be flying over the Easter holiday.  I certainly hope to get a chocolate egg from Air Singapore but the interesting question will be whether any of the churches lays on a brief service at Singapore airport.  When you think about it, they miss a trick here.  Most airports have a multi-denominational chapel of some sort.  If, even away from Easter, they racheted it up into a series of daily services they would have a large potential congregation ready to hand in the form of transit passengers.  Which would you rather: sit around for four hours drinking poor coffee among the retail outlets; or spend an hour of it listening to some hellfire-preaching about things falling from the sky, and opening the lungs for a few hymns?  No contest for the consumers, whether believers or not.  A good opportunity for the churches to spread the word – probably some devout praying from those nervous of flying.  Win, win, really, except for the retail outlets who might lose the opportunity to wear down their captive customers by trading on their boredom.  Well, it is retail outlets which pay the rent so the airports would have to be coerced.  An extra condition on the new runway for Heathrow or Gatwick, Minister?