The Fashion Industry and the Environment

It is quite possibly a generational thing, but until last week I had not come across Stacey Dooley.  However, Stacey, at the ripe old age of 31 is already a seasoned television presenter, documentary film-maker, author, all-round media personality and an MBE to boot.  My son, coming from the same generation, was well aware of her series on BBC 3, Stacey Dooley Investigates.  Many more will know her as a current contestant in the BBC’s Strictly Come Dancing (where she is, I believe, doing rather well).  I stumbled across her on BBC1 last week in a documentary entitled Dirty Secrets of The Fashion Industry.

In spite of my initial reluctance to continue watching (I have to confess I found Stacey’s Estuary English hard to listen to with its dropped ‘ts’ and ‘gs’ and clipped ‘ls’; but that’s probably a generational thing too), I found myself gripped by her total engagement with the subject and her almost naïve shocked horror at the damage which has been done and continues to be done by the fashion industry.  The programme opened with facts about the cheap availability of clothes today, and went on to explore the cost to the environment of the modern addiction to fashion.  Like so many of her generation, Stacey has become used to the availability of cheap throwaway fashion; items which sell for relatively little money and are so often chucked out when the next season’s collections flood the shops.  Stacey said she had been aware of the human cost of such cheap fashion, but had not even begun to imagine the scale of the environmental damage.  Nor it seemed had those people approached randomly in the street to put industries in order according to the amount of environmental damage they caused.  Most put the fashion industry last (out of 6).  There is mounting evidence to show it may be as high as second.

Stacey was driven for three hours across the desert that used to be the Aral Sea, between Kazakhstan and Uzbekistan.  She had had no idea that this devastating ecosystem collapse was entirely man-made and caused by irrigation projects instigated by the Soviet Union back in the 1950s and 60s.  The main rivers feeding the Aral Sea, the Amu Darya and the Syr Darya, were diverted to provide water for Soviet ambitions to make cotton a major export.  The Aral Sea, which in 1960 had been the fourth largest lake in the world, had by 1998 shrunk to 40% of its former surface area and contained only 20% of its previous volume.  The salinity of the water was greater than that of the Dead Sea and ten times more than normal seawater.  Stacey was shown at first-hand the results of this man-made disaster.  Where fish had swum there were camels; the rusting hulks of boats lay in the sand and the people trying to eke out a living in the area suffered from all sorts of illnesses and problems brought about by the toxicity of the land, the overuse of pesticides and the lack of fresh water.

Cotton not only requires the use of multiple pesticides, but huge quantities of water.  Stacey went on to illustrate graphically the amount of water which goes into making something as simple as a pair of jeans.  Most of the shoppers in Glasgow, where she set up her demonstration, had not a clue about the amount of water that went into just growing the cotton to produce one pair of jeans (over 16,000 litres).  What this amounted to in terms of volume was available for them to see in the form of bulk containers brought in by lorry and deposited in Glasgow’s main shopping street.  Shoppers were, understandably shocked and disbelieving.  Although cotton has been grown sustainably for centuries, modern cotton is, as currently grown and produced, an unsustainable crop. 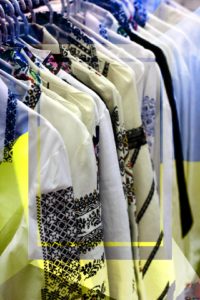 In another part of this fascinating documentary, Ms Dooley goes to Indonesia.  There she saw for herself the incredible damage the textile and garment industries are doing to the River Citarum in Java.  Yet again, the people who suffer immediately are those living nearby.  Apart from the enormous amount of rubbish (which the army is now helping to remove from the river), factories along the banks are discharging effluent and waste from their manufacturing processes.  Heavy metals such as cadmium, lead and mercury along with toxic pollutants like arsenic and dye are pumped into the rivers from factories, by-products of the production of fabric and garments for the fashion industry.  It is a minority of local inhabitants, around 40%, who do not suffer from persistent skin infections caused by the fact they have to use this water.  Watching young boys frolicking in this tainted water and women doing their washing in it bring home the situation.

Unexpectedly, Ms Dooley was able to speak to the Chairman of the Textile Manufacturers Association, the body representing those companies making clothing.  He pointed out that the regulation was there, but that it required the police to implement it and close down factories flouting the law.  This was simply not happening.  He was of the opinion that Western companies buying from Indonesian textile manufacturers should be asking more questions – not simply looking at the bottom line.  His views on the matter were not optimistic.

Apart from the spotlight on these two locations and the issues they raise, Ms Dooley, in true activist spirit, felt the need to confront the fashion industry itself.  Would she, as a journalist, get any hearing from those high street names making money from fast fashion?  Her attempts to contact them led nowhere.  Shockingly, or perhaps ironically, even when she tried to talk to representatives at The Copenhagen Fashion Summit (on sustainability in the fashion industry) only one person was prepared to talk to her.  The brand representatives did not wish to face her questioning.  The one person she did manage to speak to, the Head of Innovation at Levi’s, Paul Dillinger, outlined briefly what his company was doing to improve sustainability and also pointed out that his company shared this information with the industry.  He considered however that the only way forward was regulation.

Last week, both The Times and The Telegraph reported the comments of Patrick Grant, creative director of Savile Row tailors, Norton and Sons, and host of The BBC’s Great British Sewing Bee, that the alternatives to leather, promoted by the likes of Stella McCartney, were polluting our oceans and killing fish.  The arguments about faux leather versus the real thing have been rumbling for nearly two decades.  Only this time last year, the Ethical Gallery stated quite categorically that ‘the ill-informed pro-leather argument is dead’, before going on to explain that the 2017 Pulse of the Fashion Industry Report contains the ‘cold, hard environmental facts and real world evidence to back up our choice’ i.e. for vegan (synthetic) leather.  The point made by Patrick Grant however backs up what Ms Dooley discovered during the course of her own investigation; it is not simply the question of what things are made of, but the huge quantities in which they are made and consumed which is a problem.  Faux suede is made of polyurethane which is not biodegradable.  The washing of garments made of these plastics is what causes the microfibre shedding, which causes them to end up in the ocean.  A spokesperson for Stella McCartney pointed out that their faux suede items were not machine washable and that they were in any event working on new alternatives.

Last week too, we had the urgent warnings from the UN Intergovernmental Panel on Climate Change (IPCC).  We were told that urgent and unprecedented changes are needed to keep the Paris Agreement pledge of limiting the global temperature rises to between 1.5C and 2C.  The report concluded effectively that the physics and the chemistry for mitigation showed it was possible – what was required was political will and an understanding of the need for urgency.  Perhaps in the fashion industry the same is true.  Education and enlightenment is good and useful, both for the industry and the public, but given the urgency, perhaps, as Paul Dillinger claimed, regulation is also necessary, dispiriting as this may be, living as we do in an increasingly over-regulated world.  As the Chairman of the Textile Manufacturers Association in Java pointed out, where deals are concerned it is too often the price which is all important. As for the purchasing public, the price may be important for them as well, but they may need to learn to love better-made, more expensive items which will last and to stop buying excessive numbers of cheaply made but environmentally costly items which contribute to landfill waste after one short season.  Perhaps that too may be a generational thing.