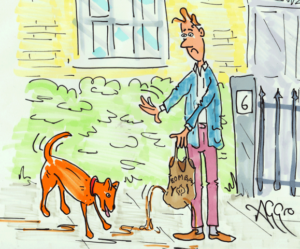 No, it isn’t a new fad.  I really have always thought that way.  About plastics, I mean.  About how they are polluting our planet and shouldn’t be allowed, especially if you are eating on the beach.  It is true that I only went public on the matter after the Queen announced that she was going to ban plastic from the Royal Palaces, but that doesn’t mean that I haven’t been anti-plastic in private all along.  After all, when gays come out of the closet, no one says that they must have been newly converted to gayness, do they?  Well, my covet disdain for plastics has been similar.  Point made, I think.

Still, the Queen is anti-plastic now and I expect that the nobility will follow her.  After all, what else is the nobility for?  After them it will be the judges and the bishops, the politicians and the newspapers, and before you know it there won’t be a plastic item to be found in the homes of the fashionable classes.  That’s where I come in.  If I want to stay a leader of fashion, I need to get rid of plastic before everyone else does, and in particular before the dinner party which I am giving tonight.

Let’s start with my clothes.  I’ve never really liked nylon shirts, but they’re usually the cheapest if you go to the Conservative party bazaar.  Away with them, and down to the charity shop to see if I can buy something in cotton.  I don’t think I’ll actually throw the old ones away though, just in case the scientists change their mind.  You remember how we were all encouraged to buy diesel cars because of the reduced carbon output, benefit to the environment, etc, and now it has been decided that they are the worst sort?  Well, it only takes David Attenborough to discover that some important type of organism is choking on wool or cotton waste and we will all be back to nylon.  A pretty fool I’d feel then if all my nylon shirts had been sold for practically nothing.

Into the bottom drawer, then, with my nylon shirts and perhaps the ties as well.  I’ll keep back the one which is similar to that worn by retired guards’ officers.  No one can tell what it was made of since it got caught in the food processor and some of my more impressionable neighbours took the expression “battle scarred” a little more literally than I meant it.  Luckily I don’t have to worry about suits.  Everyone knows that the nylon suit is not the mark of a gentleman (did Steed wear one in The Avengers?) so mine are made of a cotton and acrylic mix.  Acrylic isn’t plastic of course.  It’s a sort of upmarket paint which you see in the Tate Modern.  No wonder that an artistic chap like me wears it.  I expect Picasso did too.

That is the clothes sorted, so what about the food?  Of course I don’t serve people on plastic plates or with plastic cutlery or anything vulgar like that, but the scene in the kitchen is different.  You see, I am not much of a cook so I normally arrange for a carry-out and then transfer the food onto china dishes.  Well, China is all right – even if it does have faded pictures of the Royal Wedding on it – but the carry-out food arrives in plastic containers.  Of course, the guests don’t see this so one could ignore it, but I don’t imagine that that is the position which the Queen takes.  Does she say to the Royal Butler, “just keep the containers out of sight and serve the chicken masala on my gold plates?”  Of course she doesn’t.  She is a woman of principle and would not have a plastic container on her premises at all.  If she will not, no more will I.  That means that the carry-out has to be collected in a brown paper bag from the restaurant itself.

The staff at the Bombay Imperial were a little surprised when I insisted on the curry and rice being poured into a brown paper bag and I soon found out why.  Their paper bags are of an inferior quality and do not retain liquid.  I had only just got to my front door when I noticed that there were a couple of dogs following me and a nasty brown streak running down the street to my gate.  I put a bucket under the bag quickly, I can tell you, but it was a bit late to clean up the street.  What a mess.  One of my guests is that pompous ass Fothergill and he can be relied on to make stupid jokes about whether it really is curry or something else.  Still, on this occasion I think I have his measure.  He is bound to turn up in that lightweight sports car he is so fond of.  The one with the go-fast stripes and the pink and orange body.  I am sure that the body is made of plastic.  If so, the Queen really wouldn’t be seen dead in it and I will certainly tell him that.