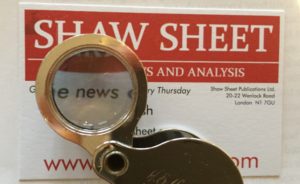 WILL THEY? WON’T THEY?  All eyes and ears are focused, if you can focus ears, on the Brexit discussions but sadly for commentators they seem to be being carried out in a relatively leak-free room.  We are left, then, seeing through a glass darkly, that is by getting our insights from other commentators who don’t know anything either.  Still, the emphasis is all on Ireland and presumably a path is being sought between the red lines of the DUP, the need for the tariff and regulatory regimes of the EU to be kept watertight and the need to avoid a border across Ireland in order to comply with the Good Friday Agreement.  It is no easy task but there are some grounds for hope.  The DUP has made some movement and seemed inclined to be helpful.  Southern Ireland would suffer badly in a no deal exit and so is presumably doing its best.  The EU would like all this out of the way at a time when it is facing an economic slump.  Everyone, Mr Johnson most of all, has much to gain from a deal.  The question is whether one can be landed against the timescale.  Should that happen the fun will move to Westminster where there is another combination of moving parts.

Mr Corbyn has said that he could not approve a deal brokered by Mr Johnson, a remark which is likely to come back to bite him if Labour whips against the deal since the suggestion will be that it did so out of spite rather than out of the national interest.  How will those Conservatives who have had the whip drawn react?  Will the Lib Dems whip against a deal or abstain?  There are plenty of uncertainties but the politicians will need to keep an eye on the public.  If a respectable deal is offered they would be brave to kick it down the track.

QUEENS SPEECH:  Her Majesty wore a lighter crown this year and perhaps that was appropriate bearing in mind that the government does not have the majority to push through the legislation which she was announcing.  That being said, the speech served as a declaration of intent setting out what the Conservatives would do if successful in a general election.  A number of the proposals are simply part of the implementation of Brexit, including the proposal to impose a points-based immigration system on EU migrants arriving after January 2021.  Leaving all that aside, however, the speech contained:

Most of it seems sensible enough and some of it would no doubt command cross party agreement.  Still, little of it is likely to be implemented this side of the next election.

DUNN FAMILY:  The parents of Harry Dunn, the teenager tragically killed in an accident with Mrs Sacoolas, an American citizen who then left the UK under cover of diplomatic immunity, have met with President Trump.  It is understood however that there is no prospect of Mrs Sacoolas returning to the UK to meet any charges.

SYRIA: Events unfolding in Syria don’t represent an escalation of the conflict but its logical endgame.  In chess, the endgame normally can’t take place until sufficient pieces have been removed from the board, enabling decisive moves, typically the race for pawn promotion, to be made.

The USA has removed itself from the board.  It was never really a participant in the civil war.  It was present as a participant in that other war – the war against Isis.  That enemy has been defeated in the field, so the USA has withdrawn.  Isis will continue to fight on other fronts – terrorism, guerrilla warfare, subversion, etc – but that struggle can and perhaps should be waged largely by local forces.  The USA’s failure is not a military one but a diplomatic one – the failure to reward their anti-Isis ally the Syrian Kurds by engineering an international recognition of their right to an independent homeland.  It could only have been accomplished by diplomacy, not by military means – the USA would never have fought against Turkey, an ally and fellow Nato member.

Now that the USA has gone, it looks like the final unresolved issue in the civil war – who will own the territory taken from Isis by the Kurds – will be resolved.  Who will be the winners and losers?

It looks like an increasingly isolated Turkey will be the loser.  Faced not only by fierce Kurdish forces but now by Assad regime forces and their backers Russia and Iran, it’s unlikely that Turkey will be able to secure even its proposed 20km ‘safe zone’.  Russia will exert diplomatic pressure and make military threats but also offer mediation and a possible face-saving solution – regime forces will secure the Syrian border, making it impermeable to Kurdish militants trying to infiltrate in and out of Turkey.  Whether Erdogan would be able to sell that to his people as a realistic solution to Turkey’s Kurdish problem, let alone as any kind of victory, would remain to be seen.  Punitive US sanctions for his invasion of Syria will certainly hurt his country.

The winners would include Assad, who would regain one of the last jig-saw pieces of his shattered country.  Turkish withdrawal from north Syria would also embolden Assad to retake the very last piece, the only remaining rebel-held enclave around Idlib, which has held out so far only due to Turkish support.  The Kurds could also be winners by securing their land as independent or self-governing within some sort of federal Syria still governed by the Assad regime, a realistic aim of theirs which they’ve pursued throughout the conflict and which is probably within their grasp now the regime is helping them evict Turkey from their territory.

The main winner will of course be Putin and Russia.  Their steadfast loyalty to their ally Assad, for better or for worse, rescuing him from near defeat and supporting him to victory, makes Trump’s dumping of the Kurds look even more reprehensible.  Their mediation between Turkey and Assad is making the USA look ineffectual.  In the absence of the USA, Russia is guaranteed to become the dominant power in the region.

Any peace, however, is unlikely to be anything other than uneasy and incomplete.  The more militant of the defeated rebels may well pursue an underground struggle as guerrillas, Isis will continue as a terrorist group rather than as a state-builder, and the more extreme Kurds may continue to support the the PKK’s Turkish insurrection with renewed animosity and even fight for total autonomy within Syria.  And no doubt the wreckage of this ruined country is currently incubating new and unforeseen configurations of violent opposition.  Assad and his allies will most probably find themselves mired in low-level but bitter conflict for years to come.

SPACED OUT:  The troubles of space provider (trsl: “property company”) WeWork grow apace.  The WeWork business model is renting long and letting to others short, hopefully taking a premium in the middle.  They are not the first to do this – many banks oft borrowed short and lent long, or the opposite, many coming unstuck in the end.  And those readers with longish memories will recall Regus, the space provider founded by Mark Dixon, which did just as WeWork is doing, though without glass walls and beer on tap.   Regus failed to match its liabilities to its income streams and, when the streams went dry, very nearly went down the insolvency waterfall – only surviving after a torrid time.  WeWork seems to have missed that worked example, beginning in a boom time for office space but now in the same difficulty as Regus, trying to solve the inevitable problem of what happens if the short contract tenants (“members” in WeWork speak) leave.  Trying to raise a lot of capital by IPO failed several weeks ago.  Now, founder and CEO Adam Neumann has stepped aside; the company has fired 13% of its workforce but looks as though it may yet run out of cash.  This is not just a WeWork problem.  Several large property companies have let space to WeWork and may be getting it back much sooner than they wanted, just as the market starts to look oversupplied with empty offices.

RUNNING ON EMPTY:  British car makers, through their trade body the Society of Motor Manufacturers and Traders (“SMMT”), say that one in three of their members have cut jobs, and 14% have relocated from the UK, or closed operations here.  The SMMT blames Brexit for this problem, or at least, variously the prospect thereof or uncertainty over, and urges the government to do something and in particular to avoid a no-deal drive away.  Industry commentators, whilst noting that uncertainty is generally bad for big business, also note that many car makers have failed to adapt fast enough to the pressures on motorists to avoid diesel fuel, and to introduce electrically driven cars.  Similar pressures on car makers are being seen around the world, and indeed Germany, luxury car maker to the world, is suffering worse than most as the “Big Three” (BMW, Mercedes, and Volkswagen) try to catch up with the move to electric power.  Those businesses and divisions that make the battery driven and assisted cars are having a much better time.

THERE’S TROUBLE AHEAD:  For Neil Woodford, former shining star of the investment fund sector, his former fund Woodford Equity Income Fund, and his nemesis Supervisor Link (“SL”), which has taken over the running of Woodford’s funds – and this week fired him.  SL intends to liquidate the fund, dividing its investments into two parts – easy to sell, which it will sell in the market as soon as possible, albeit in an orderly way, and not easy to sell, which will take longer to realise, mostly because it is in private companies which will involve in many cases delicate and complex negotiations with other shareholders.   SL thinks it should have made good progress with the easier assets by the year end and be able to make first repayments to those who invested into Woodford funds in January next year.  That’s assuming that Mr Woodford takes this lying down, and the signs so far are that he won’t, as he heavily criticised SL’s actions and strategy.  The investor reaction was more mixed, with some saying that this was the only solution and others concerned that Mr Woodford is better equipped to wind down the funds he founded.