This week we heard that a senior police officer in the Met could be sacked for using the expression ‘whiter than white’.  The origin of this expression is not really known, although many people would probably associate it with the washing powder Persil and their ads dating back to the early 20th century.  According to the web site ‘Idiomation’, set up by Canadian Elyse Bruce, it may well go right back to a poem by William Shakespeare.  Whatever its origins, most of us understand the expression as having the meaning of ‘beyond reproach’.

It was in this context that it was used by the officer in a briefing to colleagues.  However, someone in the audience decided that the use of the expression amounted to inappropriate language and reported him to the Independent Office for Police Conduct (IOPC).  The officer has been placed on restricted duties whilst the IOPC investigates – a process which he has been warned may take up to twelve months.  Twelve  months!  What on earth is there in the use of this familiar phrase that could possibly take up to twelve months to investigate?!

Fellow officers are unhappy with the decision to investigate something of this nature.  One voiced exasperation that at a time when the force is so short of experienced officers, a long-winded investigation should be made into something that is neither corruption nor serious wrong-doing.  He felt that some informal way of dealing with such things should be available.  A spokesman for the IOPC said: “I can confirm that as part of Operation Embley into allegations of serious corruption and malpractice within the Directorate of Professional Standards a notice of investigation has been served on an officer informing them we are investigating the alleged use of language deliberately intended to offend and that had racist undertones.  A notice is issued to inform an officer at the earliest opportunity following an allegation and to safeguard their interests.  It in no way indicates that misconduct proceedings will take place.”  ‘Alleged use of language deliberately intended to offend’; surely that one word alone should be enough for the IOPC to be able to dismiss this allegation out of hand immediately?  The fact that it hasn’t, does give rise to a sneaking suspicion that there may be some sort of personal vendetta involved in the reporting of this ‘incident’.

The previous week we had another police force (South Yorkshire) suggesting that members of the public should report insults that hurt feelings but aren’t hate crimes.  Hate crimes in themselves, being so subjective* are already surely hard enough to identify, without adding to the police workload?  Given the pressure on the police in terms of time, availability of officers and funding, this hardly seems to be the time for such an initiative.  (In May, South Yorkshire Police faced investigating five murders committed within a space of 13 days).  As one councillor put it, ‘if it’s not a crime then there’s no way to investigate it…  If they don’t have the resources to investigate other things, how are they going to find the resources to investigate these?’

Interestingly, when William Rees-Mogg’s family was confronted by anarchist group Class War protestors outside their home in that same week, the news clips showed policemen standing observing whilst Ian Bone and his associates shouted abuse, not only at Mr Rees-Mogg (who has shown himself more than capable of dealing with such things), but his young children.  Most of us would probably agree that young children should not be put in the position of having to listen to people telling them that their ‘daddy is a horrible person’ and that ‘a lot of people hate him’, but they may just have to learn to cope with it.  It would seem that the relatively-recently created ‘hate crime’ does not cover class hatred, so there was nothing the policemen could have done.  Class War members were merely exercising their right to free speech, even if they were doing so in a particularly nasty way. 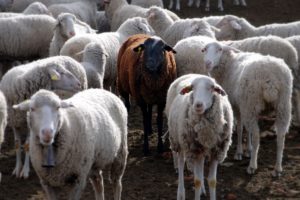 There does appear to be some hope on the horizon for those who are more than a little fed up with the susceptibility of so many to take offence at the slightest provocation.  Moliere’s play ‘Tartuffe’ has been revived by the RSC and is currently playing at The Swan, Stratford.  This comedy by the 17th century French dramatist was banned shortly after its first performance in 1664 and the author threatened with excommunication for his criticism of the hypocrisy of some of the Catholic clergy (as portrayed by the rogue, Tartuffe).  The RSC adaptation written by Anil Gupta and Richard Pinto (who have both worked on Goodness Gracious Me and The Kumars at No 42) tilts its criticism at a corrupt Muslim clergyman in the Birmingham Pakistani community.  The director, Iqbal Khan,whilst emphasising that the play is not a critique of any particular faith but of ‘spurious religiosity’, has admitted that he expected to alienate audiences, but felt that as a satire, it was important to update the context.  Thus far it has not been the butt of large protests nor of violent demonstrations.

So, in a week when Jon Plowman, former head of comedy at the BBC (and incidentally an old school mate) has bemoaned the lack of new comedy at the BBC (couldn’t have anything to do with political correctness could it, John?), maybe this juggernaut or tanker that is political correctness has started to turn – just a little.  The revolution will of course take a while, but the theatre seems like a good starting point.  Let us hope that police forces and other institutions (including the BBC) will eventually follow.

*Hate crime is an incident or crime perceived to be motivated by prejudice or hostility against a person’s race, faith, disability, sexual orientation or gender identity.