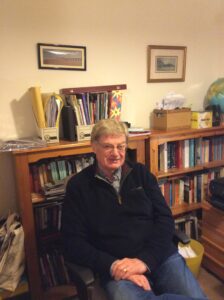 It’s Monday afternoon in the Cotswolds, the log fire is coming along nicely with a warming glow, glistening snow abounds outside still hard from last night’s deep frost making the environment nippy and slippy, and still no sight nor sound of the Rarely Spotted West Oxfordshire Gritting Vehicle which would make an amble outside comfortable and safe.  Thoughts wander to the pressing problems of the day:  Brexit is no longer exciting, Trump is gone, Boris is quiet or hiding in a cupboard somewhere …. and so the Really Big Issue is self-preservation and when/where we will get our first dose of vaccine.

Young Mattie Hancock is delighted to announce that nearly 80% of the over-80s still with us have received at least one jab, and some lucky souls among them have already had their full quota.  Last week I ferried a lady from our village to the local vaccination hub in Chipping Norton for her second jab:  she was delighted to be getting on one of our little community buses for the ride into town, and was positively smug as she skipped out of the bus afterwards – not a care in the world, she could now venture far and wide (if it wasn’t for lockdown), and I was left wondering how it might feel when my turn comes around.

We may be languishing far behind in the Covid death rate stakes but we’re up there in bronze medal position when it comes to vaccination rates, just a few lengths behind unfancied Barhrain but quite a way off the pace set by outsiders Israel.  Apparently the leaders are used to responding en masse to national crises and they’ve done a canny deal with Pfizer who supplied more vaccine than the Israelis know what to do with in return for the promise of an accelerated vaccination drive and speedy sharing of data arising therefrom.  Planeloads of the AstraZeneca vaccine are also expected imminently, with Moderna shipments due to start in March.  Happy days for Mr Netanyahu and his chances of re-election at the end of March.  Not so happy for their near neighbours and joint occupants Palestine who need to fend for themselves.

The EU is less than chuffed with both Pfizer and AstraZeneca, who blame production issues as reasons that supplies are much lower than promised.  Thankfully we who are free of the yoke that bound us to the EU don’t appear to be expecting too many delays in vaccine shipments, although dire warnings have been issued to any who might think about messing with them.  It really does look as if we’re exactly on track to achieve the Holy Grail of all over-70s done and dusted by mid-February, if the current vaccination rate holds up.  Those beyond group 4 can fend for themselves.  There seems to be a 20% wriggle factor working in our favour too, with each precious little bottle of the stuff yielding two extra doses (oh the joys of Brexit! – the political masterplan that never stops giving).  Claims that NHS staff administering the vaccine keep the extra doses in their handbags for their mates are scurrilous and completely unfounded.  There have also been suggestions that there will soon be a shortage of vials and needles, and that it might be an idea to reuse both.  This is deemed to be probably unnecessary but above all very undesirable, as the bottles with the authentic labels may fall into the wrong hands and get replenished (with goodness only knows what liquid) for sale on the open market, and the thought of having someone else’s syringe (no matter how many times it’s been sterilised) stuck into your arm might just put people off.

In terms of the priority levels of when we each get our vaccine, the rest of the world seems to be in step with us in that key workers (but strangely in our case not teachers or nursery school workers) and the most vulnerable come first, and the rest follow in descending order of seniority.  We do seem to be trailblazing though with the gap between doses – others are keen to see the outcome of our little clinical experiment to swap the initially proclaimed optimum gap of 3-4 weeks for a swifter take-up with a smidgeon less protection and a 3 months gap.  Nothing like taking a real-life punt across the whole population, but if it does turn out not quite as we’d hoped then medical science will benefit and we’ll know better next time.  Strange that no one seems to be giving Tony Blair much credit for suggesting this change in strategy, maybe on the premise that if it does work out then no one will remember it was his idea in the first place, and if it doesn’t then collective memories will suddenly spring into action.

Indonesia as the fourth most populous country is said to be the only one using a different priority strategy for vaccinations.  With the Chinese vaccine Sinovac they are jabbing younger people in the 18-59 age group first (the only group included in its testing of Sinovac) as this is where the economy’s rubber hits the road.  Much of their economic infrastructure is defined as “informal”, with little opportunity for working from home and with the population spread across so many islands.  Their assumption has been that, once vaccinated, the younger folk will be able to carry on working without infecting older members of the family, which is still somewhat unproven so again something of a gamble.  Their 59-year old President was first in line for the jab, but the Vice President, 77, will have to wait a while.  China itself has two brands of vaccine on the go, Sinopharm being the other, and claims to be on track to vaccinate 50 million people by the time of the Lunar New Year at the beginning of February, but details and track record to date are sketchy.

Russia of course claims to have developed the first Covid vaccine although hard evidence of its efficacy or roll out is also a bit thin in places.  The name Sputnik V is an allusion to Russia’s earlier feats in space exploration and either a “V for victory” or “V” for something else depending on how you look at it.  Either way they claim to have achieved around 1-2 million vaccinations (some say far fewer), which isn’t a lot by our own cutting-edge world-beating standards.

India is giving it a good go with the inexpensive and easy-to-store AZ/Oxford vaccine (which they approved for use soon after us) and the home grown Covaxin brand which has also been approved but there is some doubt as to whether all the certification protocols have been followed rigorously.  As a diversion from tradition, India is looking at a fast-track vaccination pathway for those who prefer to pay for priority and can afford it.  Indonesia is thinking along similar lines, as well as allowing companies to buy quantities of vaccine for their staff and maybe also customers especially in the travel industry.

The race to free the world of Covid is developing momentum in the richer economies.  Meanwhile in many parts of Africa and the Middle East it looks like there will be a very long wait …. unless the rest of us see sense in compassion and give (not lend) a helping hand.