A play by Caryl Churchill, at the National Theatre 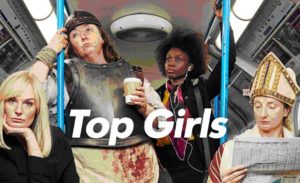 If you could sit next to any great figures from history at a dinner party who would they be?  This was a standard question on a graduate application form for many years and the answers tended to be very predictable – Winston Churchill, Gandhi, Mother Theresa, etc.  However, the choices of Caryl Churchill’s heroine Marlene, who is hosting a dinner to celebrate becoming the managing director of the Top Girls recruitment agency in 1981, are anything but obvious.  Pope Joan (the only female Pope), Isabella Bird (a Victorian traveller), Lady Nijo (a 13th century Japanese concubine), Dull Gret (the subject of a painting by Breughel) and Patient Griselda (a character from the Canterbury Tales) are not household names.  As the evening wears on, and more and more drink is taken, these characters disclose the key details of their lives and the sacrifices that they made.  Do these stories tell us anything about what Marlene has had to do to achieve her success?  Do they highlight the fact that the plight of the modern woman is actually a centuries old issue?

This play was first performed in 1982 and was a comment on both Mrs. Thatcher’s Britain and the nature of our male dominated society.  Through accounts of how Marlene was able to succeed over her hapless colleague Harold and vignettes of interviews at the recruitment agency (where girls are advised to not mention their desire to marry, wish to escape dead end jobs or feel forced to lie about their age and experience) we learn about the sacrifices still being made.  When Marlene’s past (in the form of the daughter Angie who she secretly gave up to her sister) confronts her, she is forced to address and justify her choices.

Top Girls has understandably had a number of revivals over the years.  Each time the response will undoubtedly be that many of the same issues of sexual politics remain – it is a man’s world when it comes to employment.  However, in many respects this does seem a period piece, even beyond the shoulder pads and power poses, and loses a lot of its power as a result.  The language and behaviour of the characters mean that one could be forgiven for thinking that we really have moved on.  In many respects we have, while the gender paygap is if anything getting worse.  Marlene has given up one child and has aborted two pregnancies in her singular drive for success and it is hard to see that she would still do this almost 40 years later.  The method of delivering the message also serves to undermine it.  The actors tend to talk over each other frequently and this, while realistic in terms of a dinner party, is not an effective theatrical device.  If dialogue is obscured can it really be of note?  Further, setting the play on a stage as large as the Lyttleton means that a degree of intensity is dissipated.

Nevertheless, this play does continue to have a degree of relevance and its effectiveness is enhanced by some strong performances, particularly from Katherine Kingsley as Marlene and Lucy Black as her sister Joyce.  Caryl Churchill’s work still has the capacity to shock – notably in a scene where the teenage Angie both details idolisation of her “aunt” and discusses sex with her friend Kit.  The final act, where Marlene and Joyce justify their life choices – one successful, one downtrodden, yet both still alone – shows the original and lasting power of this play.