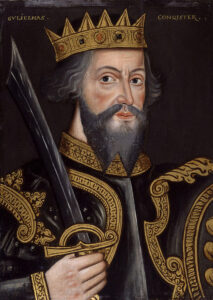 Are you fed up with putting up shelves?  Have new ways of knitting lost their attraction?  It is time to stimulate the little grey cells and to find out whether yours are the best in the house.  It is time to play the Dating Game.  Each week the Shaw Sheet will give you the dates of a dynasty of English monarchs and will let you and your family choose one event in each of their reigns.  Then you have to memorise the dates, both of the rulers themselves and of the event you choose and try to catch each other out on them.

After that your world will be different.  When you see a Queen Anne chair you will say to yourself or, if you’re that sort of person, to those around you “Ah, yes, early 18th-century”. When you are on holiday in France and you are told that the château is 14th century you will make some comment about Crecy or Poitiers.  In effect you will become wholly insufferable but insufferable in rather a superior way.  Very well, ladies and gentlemen, the game’s afoot, patronise your children, impress your neighbours, expand your mind, play the Dating Game.  We will start with the Normans.

What do you remember about William?  That his mother Arlette, the tanner’s daughter, was not married to his father Duke Robert the Magnificent?  That he proved himself a real bastard by cutting off the hands and feet of the inhabitants of Alencon who insulted his ancestry?  That he literally exploded when his swollen corpse had to be forced into his coffin because his fatal internal injuries had generated foul-smelling gases?  No, these things may be greatly to his credit but they hardly count as major dates.  What about:

His victory at Hastings in 1066.  If you are embarrassed at the thought of choosing a French victory, bear in mind that the Normans were Vikings.  There, that makes you feel better, doesn’t it?

The completion of the Domesday book in 1086?  This is a survey of landholdings, but before you dismiss it as “hardly a bestseller”, bear in mind that you can get it on Amazon more than 900 years after it was published.

Or if your thing is religious reform, what about the appointment of Lanfranc as Archbishop of Canterbury in 1070?

Alternatively you could go for something else, but William’s dates and the date of your event must be memorised by the players.

To the modern way of thinking, William shouldn’t have been king at all because he had an elder brother, Robert Curthose.  Still, even in those days families could be difficult and when his brothers emptied a chamber pot over his head for a jape and his father didn’t punish them, Robert took it rather badly.  So, although he became Duke of Normandy, England was left to his brother William.

The main thing William Rufus is known for is having been shot in mistake for a stag in the New Forest.  No one knows whether that was a real accident or the sort of “oh dear your toes have got under my boot” accident so popular in taverns of the time.  Still, it would be slacking to take it as your event since the date is the same as that for the end of the reign.  What about:

The completion of Westminster Hall in 1099, or the capture of Jerusalem by the Crusaders also in that year?  Not that William was at the Crusades of course, but, as George W Bush would have said, he was around at the time.

Yet another of William the Conqueror’s sons then took the throne and by defeating Robert Curthose he bagged Normandy as well (the English victory at the battle of Tinchebray 1106 an equaliser forty years after Hastings).  He is best known for dying from a surfeit of lampreys, a type of freshwater eel with circular jaws which it clamps onto fish before sucking out their innards.  Lampreys are delicious and one can quite understand how he ate too many of them.  They can be bought canned in a sauce designed by the 14th century French chef Taillevent from the market in Bordeaux.  Just mention my name.  But still we need to find another event. What about:

The drowning of Henry’s son and heir in the 1120 sinking of the White Ship?  Usual story: Daily Express Stuff.  Crew and passengers all drunk when it hit a rock.  Unfortunately it turned out to be serious, not just because the king never smiled again, but because it resulted in his nominating his daughter Matilda as his successor and that began a civil war.

Henry’s death set an awful poser.  Should the throne pass to his daughter Empress Matilda, who was married to Geoffey Plantagenet, Count of Anjou but was a woman, or should it go to Stephen who was a man but whose claim was that his mother was the daughter of William the Conqueror?  Only one way to decide that fairly – fight it out!  Which they duly did, Stephen confusing matters still further by marrying someone also called Matilda.  The civil war absorbed everyone’s attention so the best dates are linked to it.  Will you have:

Battle of Lincoln 1141, when Stephen was captured and left the war in the hands of his far more competent wife?

The rout of Winchester, also 1141, when Queen Matilda (that’s Stephen’s one) routed Empress Matilda’s supporters and captured her chief henchman, Robert of Gloucester, who was exchanged for Stephen?

The Treaty of Winchester, 1153, when Stephen, depressed by the death of his son Eustace, agreed that provided he could be king for his lifetime he would be succeeded by the Empress Matilda’s son Henry FitzEmpress, the deal which secured the Plantagenet succession?

Make your choice, ladies and gentlemen, but remember that the rules of the Dating Game depend on an order: learn, remember, patronise.  Until you have learnt your dates you will not be allowed to refer to them in one of those Zoom or house party conversations which you hold with your friends.

Next week: the early Plantagenets.