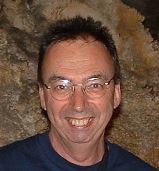 We are now at a stage where the number of COVID-19 deaths is in single figures most days, lower than the 32 per day we forecast for mid May back in early February.  Our forecast of the number of positive tests per day was pretty good (1,938 compared to around 2,000 at the moment) but we also over-estimated hospital admissions (207 per day compared to around 100).  Clearly things are progressing much as or better than expected, with the vaccine rollout keeping the number of positive tests down as social interactions increase.  The further relaxations this week and the spread of the Indian Variant may see a rise and it is probably too close to say at present whether the final relaxations will take place as expected on 21st June.

As we see the number of deaths decline to low levels, it is worth revisiting how these numbers are calculated and communicated with such precision on the daily news bulletins on all the main media.  There are, in fact, substantial differences between the three measures used in the UK and as the second wave tails off, these differences have become more pronounced.  The three measures are:

We analysed the differences between these various estimates in January this year and the table below updates the estimated number of COVID-19 deaths for three time periods:

All this data is for England only, as the excess deaths data for the devolved parts of the UK is not yet up to date.

As we previously remarked, excess deaths were initially higher (Wave 1) than the estimated number of deaths from the other two sources.  This was put down to some deaths from COVID-19 being brought forward in time by a few weeks or months; older people that would have died from some other cause in 2020 succumbing to COVID-19 a little earlier.  This is reinforced by excess deaths being negative for several weeks in the summer of 2020 (see more detail in the chart below). 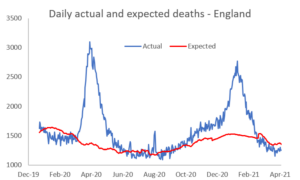 Since the start of March, the number of deaths has been below the expected number every week and it is likely that the number of excess deaths will continue to decline.  This will widen the gap between this preferred measure and the other two measures based upon deaths 28 days after a positive test and data from death certificates.  And as we have remarked before, using a five-year average understates the expected number of deaths.  The reason for this is that the number of deaths has been going steadily upwards in England over the last ten years, driven by the baby boomer effect; large numbers of births in the years following the end of the second World War are leading to large numbers of deaths now.

The effect of using a flat average is to understate the expected number of deaths annually in England by about 15,000.  On this revised basis of estimating expected deaths, excess deaths in England since the start of the pandemic would be about 83k, deaths from the 28 days after a COVID test 112k and from death certificates 132k.  These are substantial differences and the pattern observed here has been seen in other countries, as data from a recent paper confirms.  The principal conclusion was that, when comparing excess deaths to other methods of recording “in the worst-affected countries the annual mortality increased by over 50% (using excess death figures), while in several other countries it decreased by over 5%.”  The countries where excess deaths increased the mortality count were often those in less developed parts of the world, whereas those where excess deaths were less than other measures were in Western Europe.

The authors of this paper criticise the use of a simple five-year average to determine the expected number of deaths, and have calculated a number of seasonality and trend factors for each country to enable a better baseline to be estimated.  This mirrors the approach we have used here and to an extent vindicates it.

So next time you see the cumulative number of deaths from COVID-19 on the TV news, remember than in the UK this will be almost certainly be a significant over-estimate of the real figure (by as much as 30,000) and that quoting it to an exact number is therefore fairly meaningless.

This article is one of a series, last week’s article on false positives is here.