The end of a 10-year equity affair. 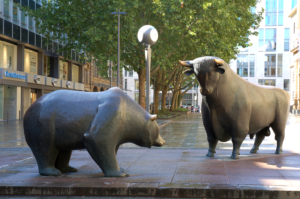 This week saw a collective sigh of relief from markets.  US equities, having withstood a dramatic 1,300-point fall in the Dow in just 2 days last week, rallied strongly, helped by above expected levels of earnings data from both banks and key growth stocks such as Netflix.  Just another blip then in a 10-year bull market.  With cash cheap, central banks policies accommodative and global growth, while not at the levels hoped for at the start of the year, still robust, the risks seem, as ever, to be of missing out. Market historians are always keen to point out the dangers of negating just a few key days in the progress of stocks, and that even tactical sales can create huge opportunity costs.  Stay invested to enjoy a bumpy ride would appear to be the message.  However, when one looks at the range of drivers behind the sell-off, while some can be dismissed, others hold portents of a longer-term correction.

For many frustrated bears the bull market has been going on for just too long.  The last 10 years has seen an unprecedented progress in US stocks, both in terms of time and extent, with the Dow rising from a low of 6,600 in March 2009 to a recent high of 26,300.  The move in FTSE has been more modest but has still resulted in a doubling from the low point in 2009 to the recent high of 7700.  The average bull phase since 1930 has been 8 years, so markets may have been on borrowed time for a while, and by many conventional measures stocks are over-valued in most developed markets.

The inflation in asset prices helped by quantitative easing had shown little sign of any correction until the sharp sell off of March this year and again last week, but quantitative easing is starting to be unwound in the US, ended some time ago in the UK and is starting to taper in Europe and Japan. The main driver of markets’ upward impetus is fading fast, but this is not in itself a reason for selling if growth in corporate earnings can support the heady valuations.

Similarly, the geopolitical backdrop can be analysed and dismissed as not warranting taking a defensive stance.  Clearly, if the trade war between the US and China and Europe escalates, or does not come to a  satisfactory conclusion, estimates of future global growth will have to be reduced. This could be particularly serious if it helps to precipitate a hard landing in China, where borrowing remains dangerously high; something which would have a knock on impact elsewhere given that China has been responsible for a significant element of recent global growth.  A further leg to the oil price rally would also raise greater questions over the sustainability of growth. However, markets have been aware of these situations for some time and, beyond increases in cash weightings by fund managers to the highest levels for 18 months (5%), on balance the view seems to be that there will be a satisfactory resolution. Similarly, it is notable that, with each successive breakdown of Brexit negotiations, the market reaction decreases.  A weaker pound is generally seen as an equity market positive and, given the extent to which UK equities have lagged others, arguments can be made for a rally on almost any outcome.

What then should we be getting so concerned about?  The real answer seems to be long bond yields. Not something that many will care about, but a long period of very low interest rates and a very flat yield curve is coming to an end.  Why does this matter?  Because we are no longer being paid to take the additional risk of holding equities, and companies will be charged more to borrow to invest to grow their businesses.

If companies are generating strong earnings growth and are paying out those earnings in dividends, why should we hold cash or bonds? This argument flips around once the price of equities has risen to the extent that their dividend yield is no longer above that of bonds. The combination of higher prices and a rise in interest rate expectations means that we now have a situation in the US where equities are only yielding around 2%, while 10 year bonds yield 3.16% and 30 year bonds 3.34%, their highest levels for 7 years. This may not matter when we are being compensated by a rise in equity prices, but as economies slow this becomes less likely. For the UK there is much greater protection, given that the FTSE 100 yields 3.8%, while 10-year gilts only deliver 1.57%. However, the UK growth outlook is the worst of the G7 and historically at it’s lowest since 2009. Further, while the pace is slow, UK interest rates are also rising, as a result of a combination of wage growth and general inflation.  A Brexit resolution is likely to see those rate rises gather some pace, and if the market starts to expect this a further rise in gilt yields could spark a renewed sell-off in equities.

There are many who would argue with this analysis, and for the UK it does look as if dividend yields will remain supportive to some extent.  Also, while US bond yields have risen a long way and have broken through some key levels, there are no signs of the systemic inflation that would push those yields a lot higher. However, with governments no longer encouraging investors to buy equities by keeping bond yields artificially low, through quantitative easing programmes, markets will become much more sensitive to changes in the economic outlook.  When investors step back and look at the underlying asset valuations of those equity portfolios that had been rising inexorably, they may decide that the party is over.