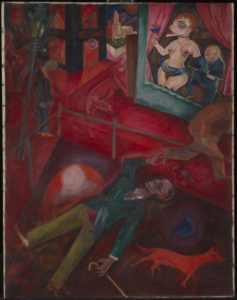 The term ‘Magic Realism’ was coined in 1925 by a German artist and critic, Frank Roh, to describe a shift towards bleak realism combined with disturbing images in art produced in Germany after the end of the First World War.  Tate Modern has used it as the title of this exhibition of works produced in the period from then until Hitler’s assumption of power, although it is not obviously applicable to some of those in the show.

The years just after the War were very difficult in Germany.  The Allies demanded substantial  reparations, there was a major Communist uprising led by the Spartacists, the French occupied the Ruhr, there was massive inflation and life was hard.  There was then a time of comparative prosperity.  This was ended by the Depression, which was followed by the collapse of the Weimar Republic and the start of Nazi rule.

Well-known artists of the period featured include Georg Grosz, Otto Dix and Max Beckmann.  They were all affected by the First War (Dix served throughout) and their work reflects the bleak mood of the post-war years.  The Exhibition includes Dix’s black and white Circus prints depicting performers with a total lack of jollity and his Butcher Shop with butchers with animal faces.  Grosz’s Suicide shows the dead man lying on the grounds surrounded by dogs and mysterious figures and regarded from a balcony by a half-naked prostitute with a caricature of a face and a glass of wine in her hand.  In Beckmann’s Girl with Drawers a night club hostess looks past her client with an impersonal stare.  Another powerful but cheerless picture is Schlichter’s self-explanatory The Artist with Two Hanged Women.

However, by no means all exhibits are infused with post-War gloom.  There are two large colourful works, The Poet Däubler by Davringhausen, and The Gardener by Deierling, which are somewhat reminiscent of Chagall, whose The Green Donkey (a good example of magical realism) is also in the show. In Biringer’s Krupp Works, Engers on Rhine, the dark chimney stacks and cooling towers dominate the town.  An appealing work is Schramm’s detailed Portrait of a Lady in front of the Pont des Arts.  A picture by Gurschneris a modern treatment of the Annunciation.

It all came to an end in 1933 when Hitler with his hatred of ‘degenerative’ art became Chancellor.  The Bauhaus, the architectural and artistic centre where Paul Klee worked, was shut down (a typically enigmatic painting of his is in the Exhibition).  Beckmann and Dix were sacked from their art teaching posts.  Beckmann, Grosz, Klee and other artists fled Germany.  Dix remained in but was forced to join the Volksturmmilitia at the end of the War and was captured by the Americans.

An interesting exhibition of the varied art produced in the period – but Grosz, Dix and Beckmann were all represented in the exhibition which has just closed at Tate Britain, Aftermath – Art in the Wake of World War One, by more striking works.