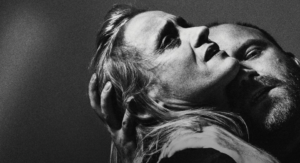 Onto a dystopian dimly lit stage runs a man in fear for his life. Together with the gruesome beheading that follows, this sets the tone for a very bleak production of Macbeth. In an apparently plastic ridden post-apocalyptic world, where armour is strapped on with duct tape, the battle for power is as devious and remorseless as it was in medieval Scotland. It is of course a very dark play but Rufus Norris’s new version at the National is particularly grim, and is as relentless as it is oppressive.

In many senses the staging, lighting and dour mood have validity.  It is a bleak period and the characters have few redeeming qualities.  At the outset the witches are an ethereal evil sprite-like presence, and the malevolence is shared amongst the rest liberally.  However, for the first half at least, while effectively conveying Lady Macbeth’s lust for power and her manipulation of her war hero husband, there is little modulation, which makes for a somewhat turgid spectacle.  The use of a rotating ramp works well to introduce characters and adds to the dynamic, but the frequent climbing of poles seems random, as do the myriad accents employed by the characters.

Fortunately, in the second act Rufus Norris allows the full power of the play to take hold, with the action and intensity lifting the experience significantly.  That the production has some success is in no small part down to the sublime talent of Rory Kinnear as Macbeth.  He is the very epitome of psychopathic paranoia, particularly in the scenes with Banquo’s ghost and the prelude to his confrontation with McDuff.  Having an actor that can deliver Shakespearean prose with such perfection can be a loadstone if it serves to highlight deficiencies in the rest of the cast.  For the most part the other performances are worthy of being on the same stage. Anne Marie Duff does not fully display the domineering character of Lady Macbeth that others have done, but she does give the role some subtlety and depth. Similarly, Patrick O’Kane’s McDuff might not have the passion that others would show on hearing of the murder of their family, but his brooding desire for revenge builds steadily to enhance the dramatic intensity of the final scenes.

There may be good reasons why so many have decided that 2018 is the year to perform Macbeth, including modern dance and operatic versions, but I am struggling to work them out.  Perhaps there does not need to be an excuse to put on one of the greatest plays on the English language, and it is this underlying strength, together with a stellar cast, that ultimately redeems this particular version.