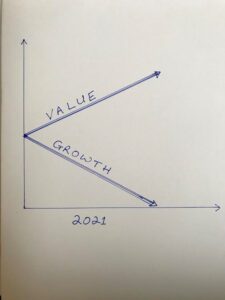 Are we in a bubble?

Will we all lose our shirts?

There has been much talk of the right letter to describe the current recession. We have discussed before the prospects of an L, T, W or, my previous favourite (ever the optimist), the Nike Swoosh. However, from an investment perspective, if 2020 tells us anything, experiences will differ enormously depending on asset selection. Catch the right wave and you could look very clever, as did Bitcoin investors last year, but given the current heady valuation levels there may be a greater risk of catching a falling knife. We face the prospect of diverging moves, which has been described as a “K”. In looking at how we get on the acute part, rather than the grave (very clever the French), one may wish to revisit the value vs. growth stock debate.

Only last week, a very well respected US investment manager, Jeremy Grantham, described the bull market in US stocks, which has been running since 2009, as having “finally matured into a fully-fledged epic bubble”. He goes beyond the dot-com type crash to liken the prospective sell-off to that of 1929, or even the South Sea bubble. He argues that the current bubble must eventually burst, regardless of how hard the Fed tries to prop it up. This view is augmented by comments from Carmen Reinhart who has warned of a financial crisis resulting from the pandemic’s impact on the “balance sheets of individuals, households, of firm, of countries.”

As bubbles go, this one is bad but it could be worse. If one uses a cyclically adjusted price-earnings ratio (CAPE), the current valuation of US stocks is around that of 1929 at just over 30, but still a long way short of the level hit in 2000. To hit the heady levels of the dot-com period, markets could progress a further 30% – no one would want to miss out on that, and we should also remember that interest rates were much higher then, meaning that the cost of holding a position is much less expensive. Further, for UK investors, the situation is nothing like as extreme, given that we have still not fully addressed the sell-off of early last year. Nevertheless, it is hard to argue with Mr. Grantham’s view  that these levels cannot be sustained for long when the economy, whether UK or US, is as about as bad as it gets.

The first glimmers of a turn have started to emerge. The bull argument for the last few years has centred on the fact that every time major economies come under pressure, central banks have offered support. It has been a win-win situation where poor economic data prompts a stock market rally, as more QE is expected, while stronger data also pushes shares up, by suggesting that the corporate world is starting to thrive. However, the Federal Reserve has recently intimated that it wants to start to “taper” its bond purchases, thereby taking away the prop. Fear of a return of inflation could similarly stay the hand of the Bank of England. Support from the other direction, in the form of fiscal help, has still to be properly formalised in the US, but the market has already moved to discount its impact.

The big question then is; De-risk your portfolio now and move into cash and bonds, or look for stocks and assets that offer long-term value? With the latter it is still likely to be a bumpy ride, but that route at least avoids you having to bet against central banks and miss out on that further overall upside potential. How do we find this year’s winners? For a long time it has been a momentum game – buy the FANGS and Tesla, and don’t be shaken out. It now may be time to look at the more neglected areas – those shares that are trading at a level somewhat below their intrinsic worth; the so-called value, rather growth, stocks.

I would suggest three areas to investigate. Finding cheap stocks may be easier said than done, but surely the first place to start is to identify those that the market has over-looked. In the UK, perhaps the most significant serial underperformers are financial stocks. A severe blow from the financial crisis was followed by a left-hook from increased regulation (and compensation) with the coup de grace of the suspension of dividends. Take Barclays, as an example. Barclays shares trade at less than half of their net asset value (NAV), with a price-earnings ratio of 10, which is around half that of the FTSE 100. There is a decent prospect of dividends returning this year and scope for bank stocks to trade closer to their NAV.

The other areas that should be explored are firstly smaller companies. Rather than chasing the growth stocks of yesterday to still higher extremes, it makes more sense to look for the growth stocks of tomorrow. Similarly, some exposure to emerging markets can be explored, i.e., areas of the world where potential is not close to being exhausted. With these 2 areas, and those traditional stocks that have lagged behind, it is probably best for most of us to utilise the services of fund managers who are skilled in identifying the best opportunities, or to buy relevant passive funds.

For many, any sell off in key tech stocks will just be used as another buying opportunity. That has been the right approach some years. However, that is, in many respects, a complacent and lazy approach. Complacent, because it ignores any assessment of the extent of current over-valuation. Lazy, because the alternative requires patience and analysis. The point for 2021 is that many experienced and capable investment managers are doing this analysis – why not take advantage of their work?