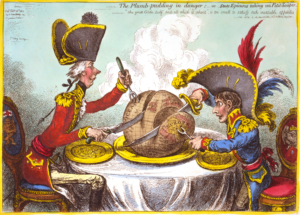 Picture the scene.  Boris Johnson, from behind dark glasses and under a fedora, with his consigliere Cummings at his side, confronts Michel Barnier and says: “I’m gonna make you an offer you can’t refuse”.  Sadly, the most likely response is: “No you won’t, yes I can and I will”.  But should the EU be thinking about being more receptive?

For the last few weeks UK politics has been almost totally dominated by the “Deal or No Deal” debate.  Should the government leave on 31st October regardless, or would the lack of a deal be too serious to contemplate? Official estimates still point to cumulative lost UK growth of 6-9% by the mid-2030s in a no deal scenario.  This internal debate has, however, tended to look at matters purely from a domestic standpoint, as if Europe is relaxed about whether we accept the current deal or not.  What is the likely impact on European growth of no deal?  When one looks at the current and prospective economic backdrop, both globally and for Europe, the implications of not reaching a deal with the UK are such that they may wish to reconsider their stance.

At the centre of such a discussion has to be the global trade situation.  If we were looking at robust international trading conditions the EU might reasonably be inclined to stick two-fingers up to the UK, thereby discouraging any other potential escapees.  However, partly as a result of the US-China trade dispute, global growth is slowing – fast. The JP Morgan index of global manufacturing growth saw its fourth consecutive monthly contraction – the most sustained and severe decline since 2012.  Over half of the 30 countries monitored see manufacturing in decline. Even the US saw its first decline in manufacturing for 3 years.  What is worse is that order books are also suffering, suggesting that the situation will get worse.  This week’s producer price index data for China showed its largest annualised drop in 3 years.  Typically this is a good lead indicator of Chinese inflation and points to the need for an economic stimulus to prevent a significant slowing in growth.  China has long been the engine of global growth, but now, with very high levels of domestic borrowing and the prospect of the trade war having a further impact, that engine could start to splutter.

With general global demand weakening, how big a loss would trade with the UK be?  The UK has the fifth highest GDP in the world and the second largest in the EU.  After accounting for subsidies, the UK has been contributing around 5% of the EU budget.  The conundrum for Europe is to assess the damage of losing such a significant trading partner, and at the same time finding ways to make up the shortfall in its budget.  The EU’s largest economy, Germany, is not in the best of shape.  German GDP fell by 0.1% in Q2, with the much-watched Ifo business climate survey falling for the fifth consecutive month.  Robust household spending has offset falling German exports hitherto, but this week as consumer confidence data was sustained at a 2 year low – that compensation appears to be going into reverse.  The latest German retail sales data showed a 2.2% fall in real terms, and factory production fell by 0.6% in July.

France is in slightly better shape.  French output grew by 0.3% in Q2, but this was not sufficient to stop the Eurozone as a whole registering a fall to 0.2% from 0.3% in Q1.  Further, French growth has not come without a cost – President Macron introduced Eur 25bn of tax breaks and other incentives at the end of last year – not something that will be easy to repeat.  In Italy, where the last 2 quarters of GDP have been -0.1% and zero, the government faces a daunting challenge in finding the cash for next year’s budget; it may have to raise VAT to do so.

Will the ECB ride to the rescue?  This Thursday sees an ECB meeting which could herald the return of quantitative easing.  The market expects a further Eur 40bn per month of bond purchases (they own (Eur 2.6trn already) and a cut in the deposit rate of 0.1% to -0.5%.  The problem is that, for much of Europe, this could be a very blunt instrument.  Buying government and corporate bonds may benefit real asset prices, but the degree to which it will stimulate growth in time to counteract other factors may be limited, and negative interest rates may do nothing more than hit the already threatened profit margins of banks.

In addition, we should step back and consider that this is not all about economics.  The current situation in Europe is causing considerable political turmoil.  The radical right-wing AfD is now the most popular party in many of the former East German states, and in Italy, while the threat of the far-Right League party head Matteo Salvini may have faded, the political situation can hardly be described as stable.

Has any of this logic escaped the EU?  France has threatened to veto any 3-month delay to Brexit, suggesting that it is prepared to see a no deal outcome.  It is, of course, one thing to say that Europe should (within reason) be making steps to find a compromise and a mutually acceptable Brexit deal with the UK – it is entirely another to expect this to happen.  On the one side the machinations of the EU, with steadfast arguments that only one deal is on offer and that is the one we already know about, may inhibit any resolution.  On the other, there may be no compromise that would be sufficiently acceptable to the current UK parliament.  No matter how hard they try, the EU may not be able to create the circumstances for the deal that they need.  Then the only debate left may be about the attribution of blame after the event.