We need to learn to live with it.

“Marseille’s Covid hospital beds ‘near saturation’” screamed a headline on the BBC website on 14 September.  It was towards the top of the list of news items.  On the same day the website of the French newspaper Le Point covered the same topic much lower down its priority list and with a calmer headline: Covid-19: health measures strengthened in Bouches-du-Rhone and in Gironde.  Marseilles is the capital of the former department and Bordeaux of the latter.  The UK media were reporting with ill-disguised glee the rapid increase in the number of cases per hundred thousand in France as I flew into Toulouse on 4 September.  Almost a fortnight later and this British delight at France’s misfortune appears not to have abated.

Yes, the number of cases of Covid-19 in France has been mounting steadily since the middle of August.  And has shot up since La Rentrée at the start of September when all the inhabitants of the cities and towns refilled with those returning home from their summer holidays somewhere else in France.  There were 10,561 new cases over 24 hours at the end of last week and 7,852 reported on Tuesday (compared to the UK’s 3,105).  Yes, French politicians and health officials express concern.  The new PM, Jean Castex, talked last Friday of “worrying developments” and ministers held a meeting for much of that day to decide if new restrictions should be imposed.  But is the French health service going to be overwhelmed?  Will the number of deaths from Covid-19 shoot up over the next few weeks?  Have local authorities with a fast-rising number of cases reimposed arduous lockdowns?  Are people refusing to return to their places of work?  ‘No’ to all these questions, if what I have seen and heard here is to be believed. 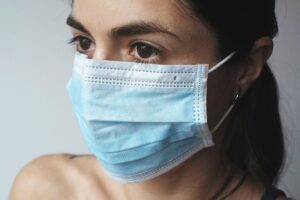 President Macron said on 28 August that the French “have to learn to live with the virus.”   They are doing so, as I saw as soon as I arrived in Toulouse.  On the tram and then metro from the airport to the main railway station, everyone was wearing a mask, obligatory in this zone rouge.  The metro in particular was crowded and it was impossible to keep more than one metre from other passengers.  But hardly anybody spoke.  People were not holding on to poles or anything which others might have touched.  There was none of the usual pushing, shoving or running on platforms or escalators.  The train to Paris seemed pretty full by the time I got off at Brive, over four hours short of the capital.  No longer are passenger numbers being limited to 50% capacity as it was when I had taken the train from Brive to Paris on 20 May.

In my village in the Lot, life has not returned to pre-Covid normal but the restrictions no longer feel burdensome.  Everyone has to wear a mask inside shops and offices.  Many, especially the middle-aged and elderly, wear them outside too.  Shopkeepers still greet you from behind a plastic screen and many insist that they will find what you want from their shelves (excellent for improving my French vocabulary).  Greetings remain non-tactile.  Queueing still happens.  But cash is welcome and used once again.  Knots of people form on the pavements and in the marketplace with opinions and gossip communicated in as animated a manner as always and with no attempt to observe the one-metre social distancing rule.  And few in the increasingly chaotic queues are observing that rule either.  In the twice-weekly market, fruit and vegetables are prodded, pressed or smelt by customers with hands no longer moist with the sanitiser which for many months it had been obligatory to use.

Are my friends and neighbours being foolish?  Are they not worried that their lax behaviour might kill their mamie, as the UK’s Health Minister, Matt Hancock, has warned British youth?  I think not.  As the ex-mayor told me over lunch, few know what the rules are any longer.  They are poorly communicated, keep changing and vary from place to place.  My own straw poll has confirmed his observation.  So the French are, on the whole, following those rules which make sense to them: wear masks, wash your hands often, don’t touch your face or other people, keep your distance if you’re with someone for a long time.

The rules are, by comparison with the UK, much less tough anyway.  My rugby team, Brive, played in front of 5000 spectators, seated one metre apart, in Bordeaux ten days ago.  The previous weekend they had played at home in front of a similar number.  Bordeaux, like Marseilles, has now cut the maximum number of people at a match or similar event to 1000.  But Brive will continue to have up to 5000 at their home matches.  Marseilles and Bordeaux have just cut the maximum number of people who can meet together in parks or on beaches to ten.  The Prefect of Bordeaux said that she hoped that the Bordelais would keep to this maximum for family get-togethers and parties inside their homes and gardens but that it was up to them whether they did so.

I was on tenterhooks last Friday wondering if the French government was going to reintroduce many of the restrictions of the eight-week Spring confinement.  The French media seemed to think so.  But no.  Jean Castex simply asked those departments with high and rising cases of Covid-19 to come up with new measures by Monday.  The only central directive of note was one which seemed to conflict with the notion that the virus needed to be contained: the period of quarantine or self-isolation was reduced from fourteen days to seven.  The only explanation I could find for this was that it would make it more likely that people would self-isolate if asked to do so; a week off work is not hard for a French person to bear.  Our ex-mayor just shrugged his shoulders when I asked him for an explanation.

So, what about those “near-saturated” hospital beds in Marseilles?  Well, as far as I can gather, it is true that those beds set aside for Covid-19 patients in the city’s hospitals are almost all occupied.  But that doesn’t mean that other beds cannot be found for any overflow.  Moreover, there is a good reason why hospitals across France have remained close to full all through the summer months.  As a top French epidemiologist said on French radio this week, the backlog of non-Covid patients requiring vital treatment is being cut.  And just as far more French have returned to their offices and factories than have British people, so people in France have not stayed away from their hospitals for fear of catching Covid-19.

A Dutch friend of mine, who lives 15 minutes drive from me, was diagnosed with pancreatic cancer two weeks ago.  She was offered a place in a nearby hospital for further tests to be carried out.  That hospital has a bad reputation around here, so she asked to go to a clinic in Brive.  No problem.  I visited her on Monday.  The clinic, not much smaller than the main hospital in Brive, was busy but calm.  She was full of praise for the care she was getting and the speed with which all her tests had been carried out (though the food, she said, was disgusting).

Perhaps the French government has realised that it is pointless trying to get people to obey the rules with the same rigour that they did at the beginning of the pandemic.  Ministers and civil servants were astonished that their compatriots so swiftly accepted being locked down for so long.  They probably doubt that they will be so amenable again.  Certainly the sight of the gilets jaunes demonstrating on the streets of Paris and other major cities last Saturday showed that many French think it’s time to return to their normal individualistic and irascible behaviour (those few wearing masks were presumably doing so to protect themselves against tear gas rather than Covid-19).

Perhaps the French government, unlike the British one, has looked across at Germany and realised that the French are more likely to follow rules and guidance given by their local politicians and officials than orders coming from the capital.

Perhaps the French government has looked at how low the number of cases of Covid-19 are now in Sweden (292 last Friday and 180 on Monday, equivalent to 3 per 100,000) and how, as Swedes go indoors out of the already cold autumn air, hospitalisations and deaths are falling towards zero.  Have they wondered whether the Swedish medical authorities, who have effectively decided what strategy should be employed, have been right all along in not imposing a strict lockdown and not recommending the wearing of masks (hardly any Swedes wear them)?  Have the Swedes achieved herd-immunity precisely because they have never locked down and have learned to live with Covid-19?

The British will soon have a similar number of cases as France.  The charts show that we have lagged some three weeks behind the French all the way through.  The great revival of the virus in France occurred as the French spread out across the country for their holidays and then returned.  In the UK the return from holidays, whether at home or abroad, has caused the cases to rise fast.  When all those university students, a bigger number than ever thanks to the idiocies of Gavin Williamson, head as far away from their homes as possible (something which does not occur in France), the virus will spread even more quickly in the UK.

Do the British retreat into our shells once more and rely on our “world-beating” Test and Trace system to save us?  Or, like the French, do we learn to live with Covid-19 and accept that some of us will die from it, vaccine or no vaccine?