RSC at the Barbican 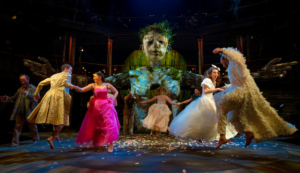 Orlando is bored and frustrated.  His slick-suited brother Oliver has inherited the family estate, leaving Orlando with no role or education. Nevertheless, Orlando is still seen as a threat, and when he challenges Duke Frederick’s wrestler Charles, Oliver sees an opportunity. Although he wins the contest, and falls in love with the Duke’s niece Rosalind, Orlando is no longer welcome in the kingdom and escapes to the Forest of Arden. Rosalind, who was only accepted as the friend of the Duke’s daughter Celia, also escapes to the forest disguised as a young boy, Ganymede. She soon encounters Orlando and her exiled father, but neither recognises her.

As You Like it is one of the more regularly performed Shakespeare plays, perhaps because its story of a multiplicity of romantic entanglements is light, whimsical and uplifting. To justify yet another production, however, needs something quite special – and the RSC’s latest take does not disappoint. Director Kimberley Sykes interpretation gets better and better the more she gives free rein to an exceptionally talented cast.  From the close of the first act they increasingly directly engage and involve the audience, to elicit the real underlying charm of the play.

To single out any performance is in danger of doing a disservice to a host of others at the top of their game, but it would be hard not to point out Lucy Phelps’ Rosalind. Her boundless energy and charm transports the audience, leaving no doubt as to why both Orlando and the shepherdess Phoebe fall under her spell. Playing the fool in a Shakespeare play is always a challenge, partly because, in a modern sense, there is not always obvious humour in the lines. Fortunately, Sandy Grierson’s dour Scottish Touchstone is able to physically extemporise to make the role both genuinely funny and the perfect foil for the development of the relationships between the key players.

As You Like It has more songs than any other Shakespeare play, so getting the music right is a key to the success of a production. Composer Tim Sutton has written a tremendous score and, with musical director Lindsey Miller, manages to make the songs more than just lyrically memorable. Great care has been taken to cast very capable singers.  Emily Johnstone stands out in the dual roles of Amiens and Le Beau, with her singing matched by some great comic timing  (wearing high heels on a forest floor is never a good idea).

While gender confusion is the essence of the play, there is an element of gender blind casting in this version. Changing the shepherd Silvius into Silvia who tries to woo Phoebe, who has fallen for Rosalind while in her Ganymede persona, adds a further twist to the overall confusion.  Further, having an actress of the quality of Sophie Stanton play Jacques, the melancholic Lord who acts as a commentator on much of the proceedings and who has a number of the key speeches (including “All the world’s a stage”), is a triumph. The country girl, Audrey (ably played by Charlotte Arrowsmith), the subject of Touchstone’s affections, is deaf, which allows for some entertaining and energetic signing.

The final accolade should go to the set. We don’t need a host of trees for Orlando’s love poetry (sticky notes on an audience member will do) due to some excellent use of lighting, and the arrival of Hymen, the god of marriage, is a big reveal of masterful (and enormous) proportions, creating a spectacular close as all the romantic plot lines are brought to a very satisfying close.