Time For A New Train Set.

“Due to planned engineering works, there is no escalator service at Brixton.  Passengers requiring assistance should alight at other stations.”  “The Central Line is closed due to strike action.  There are no trains on the Victoria line beyond Finsbury Park.  There are delays on the District Line due to a signalling problem at Baker Street.  All other lines are running a good service”.  “Stand behind the yellow line as the train approaches.”  And a personal favourite: “This train is being held here to regulate the service.”

No prizes for right answers in this week’s competition; they are modern cries of London.  More specifically, they are all cries of Transport for London, the dreaded TfL, which controls London’s transport infrastructure, and whose most visible manifestation to most Londoners is the tube – the Underground.

Those readers unfamiliar with London, or at least, with plunging deep into  mysterious places of whooshing draughts and odd smells of burning rubber, may need some translation as to what those odd messages mean.  In general, they mean: “Not our problem”.  “Regulating the service” means that your journey will be delayed so that the gap between trains is more even; possibly helpful for persons catching trains behind yours, but pretty annoying if you are in a hurry, stamping on discarded copies of the Evening Standard as the train waits and the driver eats his sandwich.  And presumably it is good idea to stand behind the yellow line at all times, if only to avoid falling into the track pit, where lurk the electrified rails.

You will note also that the operator tells you that they are running a “good service”.  This is a somewhat unusual approach to assessing the quality of the operation, perhaps more correctly the role of the person receiving the service, rather than of the one giving it.  You would not expect your waiter or lawyer to tell you that they had given good service; they leave it to speak for itself, to be marked by respectively, a tip, or thanks and prompt payment of the bill.  Plus of course, a service of trains running to timetable,  last cleaned at 5am that morning, and where there are rarely empty seats is not really “good”; more “what you lot have paid for”, you might think.

But TfL is a very odd thing altogether.  In what was intended by John Major’s government to be the last great application of Thatcherism to nationalised businesses,  the railways were privatised in 1994.  An unnecessarily complex structure tried to introduce elements of competition to the system, but also ensure that the track and major railway stations remained under one non-profit service organisation, giving open access to all operators.  The operators got limited term franchises, and to remove one obvious difficulty in buying rolling stock for limited life businesses, the rolling stock was owned by separate leasing businesses, subsidiaries of banks and finance houses to whom the capital allowances, deductible for tax, were very attractive. 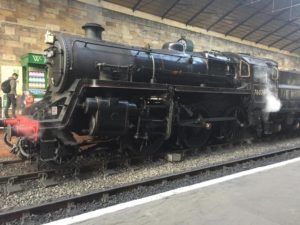 This structure has been much criticised, but that overlooks the fact that it has been very successful by most measures.  Passenger and freight numbers are well up, the services are more reliable (in spite of occasional blips) than in British Railways days, the passenger fleet and the motive power is mostly modern, comfortable, and reliable.  Even the fares have become more closely aligned with demand – which is a slightly sheepish way of saying that those who can afford to pay – commuters and business people – pay more; those who can’t, such as old persons and students, travelling off-peak, pay a lot less.  If there are problems they tend to relate to the lack of competition where the Department of Transport has gradually created a series of private operator monopolies.

The great London Thatcherite shake up of the 1980’s which saw the Greater London Council abolished also saw the bus services privatised, subject to all sorts of bureaucratic hang-over and flim-flam (including the buses remaining red), but essentially set free.  Not so the Underground trains; various attempts were made to get private capital in and introduce some incentives and competition.  This got nowhere much, apart from on the maintenance front, and the Blairite resurrection of the Greater London Authority gave few powers to the newly supposedly empowered Mayor – except planning, and control of the transport system.   As the new Mayor was Ken Livingstone it was obvious where this might lead, and Ken gleefully started expanding a modest regulator into a massive fiefdom, peeling off all the attempts that had been made to introduce the private sector into the Underground, and preparing for the new controllers (whether thin or fat) to crawl out of the tunnels and seize what has become known as the “Overground”.  This began in 2007 with the ending of the Silverlink franchise and direct operation by TfL, soon followed by the East London line and then much of the south of the river network.  Oddly, this was done on the watch of one Boris Johnson, then Mayor, and perhaps not so much a fan of the private sector as he might now seem to want to be.  (It should be said that the actual operating is done by Arriva, as a service contractor, but the branding is TfL which has its own livery and logo – very much its own trainset.)

Not only did Mr Johnson not lie down in the tracks of this new nationalised railway authority, neither did national government, which generally has let TfL extend its operations across more and more of London’s railway system above ground.  Oddly for a government which is fairly positive about its defence of the national private railway system, it seems less robust when it comes to the capital city – yet London is ideal for introducing the virtues of private operation and competition – the mere density and many alternative routes lends itself remarkably well to such an approach.

And it is not as though London’s railway is earning vast amounts of money to keep the Mayor’s finances in good order.  Operating costs are ever rising (not surprising with tube drivers earnings often around £60,000 a year), trouble with rail unions is avoided by giving way to them at all times, and passenger carryings are trending steadily downwards.  The Mayor’s fare freeze is not helping revenue generation either.  The system was supposed to break even this year, but latest estimates show a likely loss of around £1billion, and that’s after some deferring of expenditure, including urgently needed new tube trains.   In short, the whole thing is a little taste of what Corbyn Britain might look like after a few years.

So here is a wonderful opportunity for a radical government to demonstrate the virtues of private competition and capital.  Take the Mayor’s train set away from him and privatise it properly.  Open access operators whenever possible and certainly no cross ownership where it would impact on possible competition – including between buses and trains.  Let the operators own the tracks and manage them collectively, a sort of railway clearing house as there was up to 1947 to sort out costs and revenue from tracks in joint use.  Get the government out of every aspect of railways that it can be winkled out of, and let transport operate as a proper business, just like food retailing, and publishing, and car manufacturing.

The Scots often accuse Westminster of using Scotland as a testbed for their latest wheeze – an accusation which too often is true. So let Westminster start a new approach to the railway business – at Westminster.  Time to seize the controls, Mrs May, and promote private enterprise as the best route.