A book by Laurence Catlow

Occasionally we like to recommend a good book in the columns of the Shaw Sheet, one which we think our readers might not have come across, but which they may enjoy.  This week we take a leap into deep water – and recommend a book on fishing.  Before you press the page-turn button, bear with us though; this is no commonplace book on fishing.  It is (the puns do come in spate on books to do with fishing and rivers) a journey into very deep waters; and on how to get back to dry land.  Enough puns; it is a serious book and we will behave accordingly.  Although it is centred around fishing, that is the hook (sorry) on which a deeper tale is told.

Laurence Catlow is the author, one of those wonderful types on whom the United Kingdom once relied heavily to make things work and to keep an eye on its moral compass.  It is, alas, a type that one suspects is becoming rare, and increasingly confined to the fringes of these islands, both physically and metaphorically.  More’s the pity, you might think after reading this book, his latest in a series which deals with his life-long interest in country sports.  Fishing is Mr Catlow’s passion, fishing in the northern Pennine rivers, mostly for trout, and his back-up passion is shooting, again, amongst the northern hills and on quiet unfashionable shoots, including Mr Catlow’s own fifty acres or so of rough shooting land, High Park.  Great salmon rivers, Scottish or Icelandic or Canadian, do not feature in his writing, nor bone fishing or Hemingwayesque struggles with Caribbean marlin; neither will you find him among the Purdy dressed lot on fashionable shoots with lunches in castle dining rooms and enormous battues to pass the morning. Mr Catlow is what some of us like to think of as a proper sportsman, the rule of thumb being not to catch or shoot more than you personally can carry home on your shoulders (this scribe confesses that for him this is  oft forgot in the excitement of the chase).

Your reviewer came across LC (One could not possibly call him Laurence without a formal introduction, and Mr Catlow is too stiff for such an informal man) as a columnist in a shooting magazine, liked his writing style and what he had to say, and bought one of his books.  It was beautifully written, and offered a gentle old fashioned view of the countryside and the modest role of the sportsman in it, that struck a chord, and rather changed my view of what was desirable and proper.

It is not surprising that he writes so well.  LC is from a modest background but got himself to Cambridge and took a good Classics degree.  After some teaching experience elsewhere he went to Sedbergh, a fine old Catholic boarding school (LC is a devout Catholic) in the rural upper lands of Lancashire, and quickly became Head of Classics there.  One senses that he was a very able and admired teacher, not least because although devoted to his subject, reading ancient Greek and Latin poets for pleasure, he had also that rich hinterland of his fishing, and later, his game shooting, which he took pains to share with boys from the school.

He began The Healing Stream many years ago as a history of his life through his fishing, almost a fishing confession about how he learned to fish and acquired the etiquette of a country sportsman.  He says in the finally finished book that he made very few amendments to this early section.  It is certainly honest and open about the daft things we all do when we are young and confident and think we know everything, yet whilst somehow knowing that we are flawed and unlearned, if only we could ever admit it (which very few of us ever do).  This first part is to some extent also a fishing guide, and no doubt young aspiring trout fishers would learn much from it, about rods and waters, and flies, especially flies.  But this is no standard fishing manual, the quality of the writing and the openness of the author’s musings set it way above a normal fishing tome. 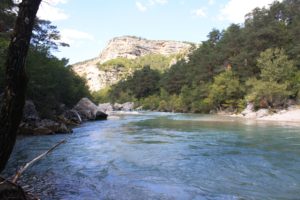 But…at this point, you ain’t read nothing yet.  Some twenty five years on, our hero took up his abandoned manuscript to write the second part.  He had much to tell us.  He had matured as a fisherman and as a man, overcome some personal struggles of early life, and had a particular tale to tell, about himself and as to how in his view fishing had saved his life, or at least his sanity, though your scribe would also offer a bow to the empty and wild northern hills where he spent time wandering alone and which contributed their spirit as well as their waters to the healing process.

LC had retired from teaching, from Sedbergh, at the age of sixty, feeling, not that he was exhausted or had nothing more to give, but that perhaps the best of that part of his life was done, and that he had another life by the streams and on the fells that would delight the next part of his life.  But that was not how it turned out.  Within a few months he began to suspect that he was seriously ill.   He was, but not with the cancer or liver disease that he feared, but with severe depression.  He does not dwell much on what caused that sudden dive in his mental well-being, but he delivers a deeply moving and thoughtful account of what he went through, and as to how he began a steep and stumbling climb back to a stronger sense of being and worth.

LC is, one detects, a private and reserved man in possession of a large reserve of no-nonsense northernness.  This cannot have been an easy book for such a man to write.   Indeed there are considerable parts where his reserve fights fiercely any urge at disclosure; the history of his illness is interspersed with a recent diary of fishing expeditions, as LC twists and weaves away from relating his troubles.  He did recover and he is once again active with rod and gun in the northern dales, though, as he very casually reveals in passing, still with regular infusions of drugs to keep his re-found equilibrium.   He pays tribute to his drugs, although it took sometime to get the mixture right and to overcome the cynicism of a cynical patient who felt he didn’t need them or might become addicted to them.  He is much more scathing about the sessions with psychiatrists and counsellors who attempted to draw him out and to make him understand himself.   And very grateful indeed to his friends and relatives who took the trouble to care for him, and to show him that they loved him.

This is not just, or indeed really,  a book about fishing; nor is it a book about how to cope with depression.  It is a very honest account of how one man coped with and recovered from a mental illness; a man of that type who will always tend to reject the suggestion that it could happen to him or that he might need help in recovering and rebuilding himself.  It is beautifully written and fishing is key to the man – skip if you must some of the (actually fascinating) broodings on which tied flies might most attract trout in certain rivers in certain weathers in certain conditions of water, but by the end you will understand the completeness of his recovered life.  As a moving insight into one man’s struggle with his own demons it is well worth the read;  the fishing advice comes free.

The Healing Stream, by Laurence Catlow, is published by Merlin Unwin Books

If you enjoyed this article please share it using the buttons above.