Wrapping it all up 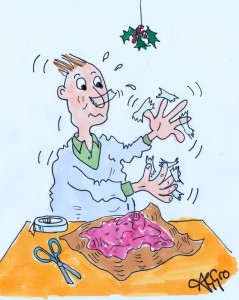 It was Christ himself who said that it is more blessed to give than to receive, so I think it must follow that membership of the Trinity is a help when wrapping Christmas presents.  For me as for most men, however, wrapping is something of a trial and the frustration of wrestling with paper, sellotape and scissors absorbs much of the goodwill which should accompany the gift.

Women can do it, of course.  It is as natural to them as breathing, and in a few minutes they can produce a symphony of perfectly tied ribbon and neatly folded corners without so much as breaking into a sweat.  “There you are, you see, it’s easy,” they say, smiling sweetly and a little condescendingly, offering to take over the wrapping of the parcel with which you are struggling.  It is tempting to give in to them as one usually does but, in these days when sexual stereotyping is frowned on, dignity has to be maintained.

“No, No,” you say, “it is simple enough.  I’ll have it done in a jiffy.”  I’m not quite sure how long a jiffy is, but this boast is mere braggadocio, a demonstration of machismo designed to boost your own self confidence, the drawing-room equivalent of the bare-chested wrestling with wild animals which has become de rigueur for Russian leaders.  Still, it certainly stiffens the sinews and you seize the sellotape with renewed zest.  It is then that the unpalatable truth dawns.  The box you are about to wrap is octagonal.

The difficulty with this lies in the number of fingers.  Those of us who live within the circuit of the M25 generally have four fingers and one thumb on each hand.  Technically that is not quite the same as having five fingers on each, although the distinction has often been blurred in literary works, for example Tolkienian references to“Nine-Fingered Frodo and the Ring of Doom”.  Anyway, a total of ten fingers and thumbs is usual.  That means you have ten basic mooring positions for pieces of sellotape, exactly the number of pieces which you need to wrap an octagonal box – one at each corner and two criss-crossing over in the middle.

So far, so good, you might think; that sounds like a match.  Unfortunately, however, it leaves no fingers (or thumbs) free to manage the paper itself and you end up trying to fold it with fingers and thumbs which already have sellotape stuck to them.  The result is inevitable.  The sellotape sticks to the paper in all the wrong places.

Now there is a difficult choice.  Either you cut those bits out of the paper, relying on overlap to cover the gaps and pleading origami if  that doesn’t work, or you flatten the sellotape onto the paper in an “I just did this for a bit of extra ornamentation” sort of way, slightly undermined by the fact that it isn’t quite flat.  The trouble with both systems is that you will need more sellotape to straighten things up, so you cut a few more pieces from the roll and stick them on the empty fingers and, if there are not enough of those, onto your nose and ears as well.  Then the phone rings.  You forget about the sellotape and seize the receiver.  It is the Vicar asking you to read the lesson at carols.  Yes, of course, it would be a pleasure.  You go to put the receiver down but that is easier said than done because it is stuck to your ear.  It hurts and you swear.

“What did you say?” asks the Vicar, his tone one of surprise.  You repetition owes more to politeness than it does to veracity.

It’s when the box is all wrapped up into something which resembles a large carbuncle that you begin to have doubts.  Is the present really suitable for its recipient?  The trouble is that you have no Christmas list for them and you cannot really tell whether they liked last year’s present or not.  “Thank you” letters are so anodyne these days.

It was not always so.  People used to be a lot blunter.  I remember my parents sending my Great Aunt May a magnificent metal tray.  It had come as part of the free box of goods which the Metal Box Company used to distribute to its shareholders, but we thought that she wouldn’t know that.  On it there was painted a large pheasant, some eggs and a few hedgerow plants, all things which seemed likely to warm the grand-materteral heart.  Two weeks later the tray came back through the post.

“Thank you for your present which I find vulgar,” said the accompanying note rather bluntly.  And then, to make sure that we got the point: “I am therefore returning it to you as you may have a use for it.” Well, at least it gave us a clue as to her likes and dislikes for the future.

It is as you are worrying about whether the present you have just wrapped is appropriate that the lady of the household intervenes.

“Come on, that’ll have to do or we shall be late to church,” she says.  So off you go to carols followed by mulled wine.  It is a truly festive gathering and only slightly spoiled when you hear the verger comment to the gravedigger that this is the first time he has heard St Matthew’s Gospel read by someone with a piece of sellotape stuck on the end of their nose.